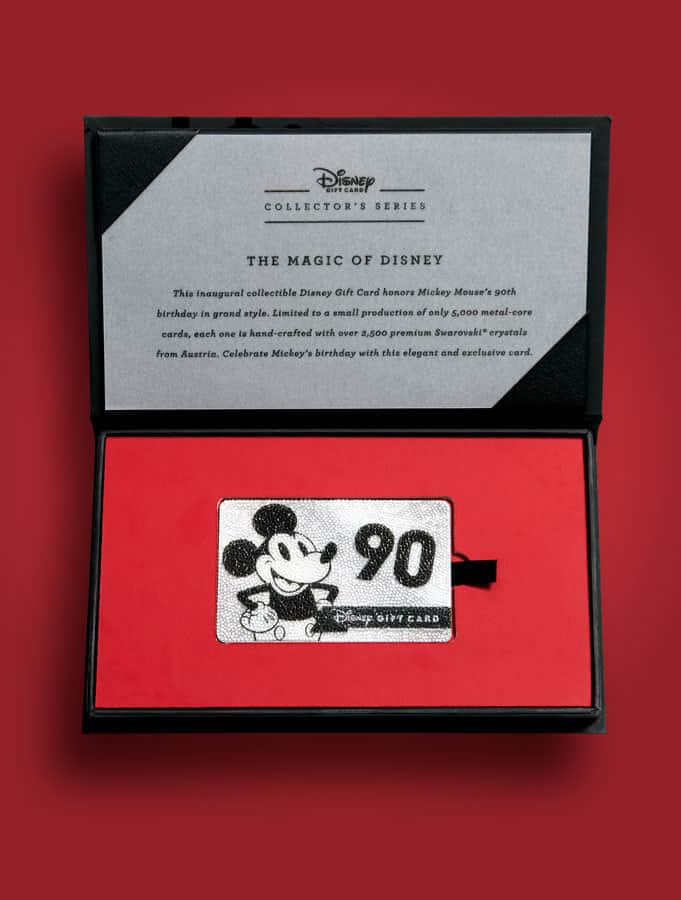 Everyone has a story of how, exactly, they came to love the Disney company and all of the beloved characters that come with it. For many, that love began with Mickey Mouse. Mickey recently celebrated his 90th birthday and while there have been many different ways of commemorating this special day, the Disney Gift Card  team wanted to put together a special card to remember the day. They wanted it to be unique and it looks like they have achieved that.

The team gave the task of developing the concept of the card to Justin Hamana, Graphic Designer with Walt Disney Imagineering. He put together the concept of a crystal-encrusted Disney Gift Card. Swarovski specialists took the task all the way to Austria, where they had to engineer a new way to adhere crystals to the face of the card, which had not been done before.  All 5,000 of the cards are made with a metal core, surrounded by a protective plastic, with over 2,500 premium Swarovski crystals on the entire face of the card itself. The box it comes in is also incredible. It is the first to carry the Disney Gift Card Collector’s Series insignia and includes a vellum certificate, along with a magnetic closure.

At the Destination D event last weekend, a select number of these cards were made available to D23 members in attendance. If you weren’t lucky enough to attend, you can get one of the cards at Walt Disney World Resort or Disneyland Resort. For $300, you receive one of only 5,000 premium gift cards produced, in its custom box, loaded with $90 redeemable for almost all things Disney — from Theme Park tickets, resort stays, Disney vacations and dining, and merchandise at Disney locations across the United States, Canada, and Puerto Rico. The Disney Gift Card Collector’s Series will be available for purchase starting December 4, 2018 at the locations below (while supplies last.)

The inaugural card in the Disney Gift Card Collector’s Series can be redeemed for practically all things Disney by scanning the barcode on the back. There is no magnetic strip, so your card will never be swiped. However, if the thought of carrying around a one of a kind gift card like that scares you, know that you can merge the $90 onto a standard Disney Gift Card at DisneyGiftCard.com.