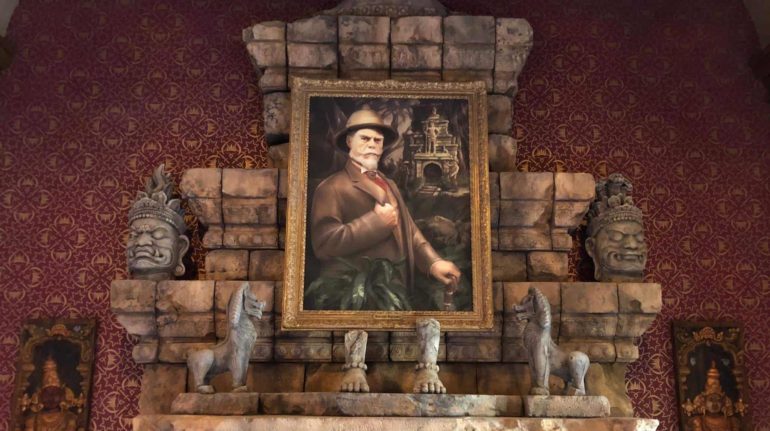 The three Tower of Terror attractions at Disney’s Hollywood Studios, Disney California Adventure, and Walt Disney Studios Park in Paris were all built around the theme of The Twilight Zone television series. The one at California Adventure, of course, has since been converted to a new attraction. Last year, it reopened as, Guardians of the Galaxy – Mission: Breakout!

Disney park-goers in western countries now probably associate their nearest Tower of Terror building with one of two intellectual properties: The Twilight Zone or Guardians of the Galaxy. However, the Tower of Terror at Tokyo DisneySea has its own unique backstory, which is not tied to either of these properties.

Tower of Terror at Tokyo DisneySea

In Japan, The Twilight Zone isn’t as famous, so Disney’s Imagineers dreamed up a different concept for the ride. They themed it to a hotel owned by “explorer, antiquities collector and multi-millionaire Harrison Hightower III.”

Even if you have ridden Tower of Terror at Tokyo DisneySea, the ride is all in Japanese, so you might not have a full appreciation for its backstory. Here we’ll take a look at that backstory along with some photos of the attraction and its impressively detailed queue.

As Rod Serling once said, “You are about to enter a different dimension …”

A Tale of Two Towers of Terror

Above, you can see a side-by-side comparison from roughly the same angle of Florida’s Tower of Terror and Japan’s. As you might notice, the Tower of Terror at Tokyo DisneySea is blockier and more Gothic than its Hollywood Studios counterpart.

When viewed from up close, its architecture and color scheme are somewhat reminiscent of the Haunted Mansion at Tokyo Disneyland. According to an official press release, the building actually consists of three sub-towers. The 14-story “Great Tower” is set back from the 8-story “Indian Tower” and the 5-story “Caliph’s Tower.”

Hollywood Studios situates its Tower of Terror at the end of Sunset Boulevard. Visually, this street lined with palm trees evokes Los Angeles. DisneySea’s version, by contrast, is located in the New York Harbor section of the American Waterfront port.

The tower rises up behind the gazebos and splash fountains of Waterfront Park. Known properly as the Hotel Hightower, it earned the nickname “Tower of Terror” after a fateful night at the turn of the century …

The Story of Harrison Hightower

Outside Tower of Terror at Tokyo DisneySea, you’ll see newspaper clippings about Harrison Hightower posted by the New York Preservation Society. The headlines chart Hightower’s return from Africa, the grand opening of his hotel, and his subsequent disappearance.

If you ask a Disney Cast Member at the ride’s entrance, they can usually provide you with an English story card for Tower of Terror. This story card explains how Hightower disappeared on New Year’s Eve, 1899. Before disappearing, he held a press conference to show off an idol he had brought back with him from Africa.

That idol, Shiriki Utundu, was said to be cursed. Hightower and his expedition had plundered it from a remote African tribe called the Mtundu. The official press release explains how the Mtundu “only stood by and watched expressionlessly as Hightower took their idol. Some thought they may even have been slightly smiling …”

Even if the idol hadn’t been cursed, Hightower’s arrogant dismissal of its power might have incurred the wrath of the gods. At a New Year’s Eve party following the press conference, he boarded the elevator to his penthouse with the idol.

When the clock turned midnight, ringing in the year 1900, a strange, impromptu power outage bathed the hotel in darkness. Suddenly, green lightning exploded from the penthouse. The elevator’s cable snapped and it plummeted to the ground floor.

Shiriki Utundu would be retrieved from the wreckage, but Harrison Hightower was nowhere to be found. It was the last time he would ever be seen.

Inside the Hotel Hightower

The setting of the ride is thirteen years after Hightower’s unsolved disappearance. The New York Preservation Society is now offering free public tours of the hotel.

When you step inside the Tower of Terror, you’ll see a portrait of Harrison Hightower over the fireplace. Artifacts he collected decorate the mantle. If his white-bearded face looks familiar, it’s because the model for his likeness was none other than Disney Imagineer Joe Rohde.

Numerous other paintings of Hightower’s exploits litter the hotel lobby. As the queue winds through the lobby, it will take you past the condemned elevator where he mysteriously vanished.

You’ll soon move past another portrait of him as the Fastpass and Standby queues converge. Before entering the pre-show room, your tour conductor will explain Hightower’s story in Japanese.

In the pre-show room, you’ll see a stained glass window depicting Hightower in front of his hotel. Shiriki Utundu sits on a pedestal next to the window. A gramophone on Hightower’s desk plays a recording of his final press conference.

Abruptly, the lights go out, and the stained glass comes to life. It changes colors and shows a vignette of the night Hightower disappeared and the elevator crashed. At the end the Shiriki Utundu statue also comes to life, glowing green, looking around, and laughing evilly.

The Shadow of Shiriki Utundu

After the pre-show room, you will enter another large trophy room with two loading floors. The centerpiece of the room is a giant pharaoh statue.

Other idols, mummies, and objects of plunder, including a huge horned statue head, are visible from the queue. They exist as reminders of Hightower’s greed and how he brought the curse of Shiriki Utundu down upon himself.

The New York Preservation Society’s tour of the hotel concludes with a ride on a service elevator up to the penthouse. You can probably guess how that elevator ride turns out for guests. Riders can expect to get a glimpse of DisneySea from the top of the tower before their elevator goes into freefall.

Tower of Terror at Tokyo DisneySea usually features three drops, but there is also a special Level 13 version, dubbed the “Shadow of Shiriki.” This version runs from January to mid-March and features seven drops.

All in all, Harrison Hightower’s Tower of Terror offers a fascinating remix on the classic ride Disney fans know and love.

Have you ridden this attraction at DisneySea? Are there any other cool details you’ve noticed? Share your comments below!