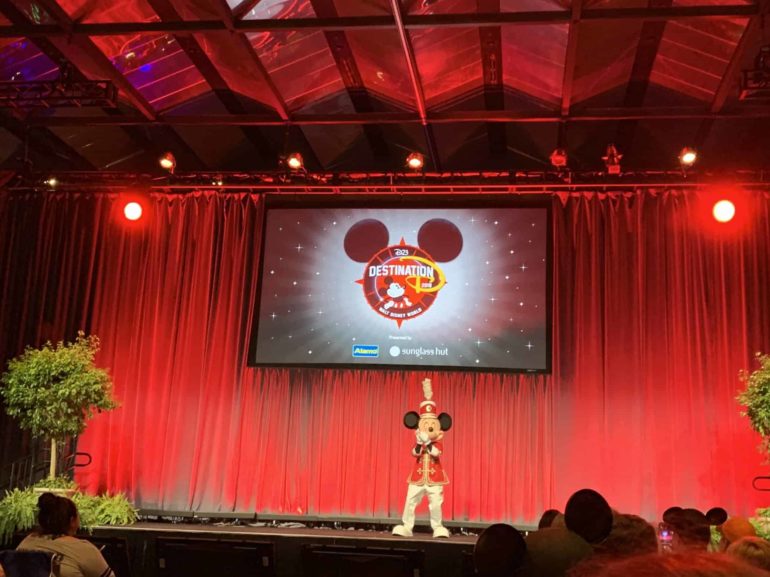 D23’s Destination D: Celebrating Mickey Mouse continued today at Disney’s Contemporary Resort, and while it may not have been as packed with big Disney Parks news as yesterday, there was still plenty for fans to enjoy. If you didn’t see our recap from Day 1, check it out here.

Throughout the day, vintage film clips from the Disney Parks were screened during a number of panels. One of the highlights was rare footage of the Mickey Mouse Revue, which ran at the Magic Kingdom from 1971 to 1980, before moving to Tokyo Disneyland in 1983 where it ran until 2009. There was also a short film starring Mickey and Michael Eisner that ran as part of the original version of the Studio Backlot Tour at the then-Disney MGM Studios.

While we learned yesterday when Mickey & Minnie’s Runaway Railway is scheduled to open, today, we learned a little more about just what will be happening when guests can once again step inside the Chinese Theater for this new adventure.

When guests enter the screening room, they’ll see Mickey Mouse in “Perfect Picnic.” In true Disney Parks fashion, something goes wrong, and guests will then cross over into the cartoon world, where they’ll board a train engineered by Goofy. The ride itself will feature both white light and black light scenes, so Imagineers had to develop a special paint that would look right under both kinds of lighting.

In keeping with the celebration of all things Mickey, there were announcements to delight old-school and new-school lovers of Mickey. Chris Willis, composer for the Disney Channel’s Mickey Mouse shorts, will be creating the theme for the ride. Meanwhile, the sounds for the attraction will be created entirely using Disney Legend Jimmy Macdonald’s legendary sound effects equipment, which was brought out of storage for the occasion. But at least one sound effect will come from the Disney library: the steamboat whistle from Steamboat Willie, the first Mickey Mouse cartoon released, will be part of the train sound effects. Mickey lovers both young and old will have something to enjoy when Mickey & Minnie’s Runaway Railway opens in Fall 2019.

Also opening Fall 2019 is Disney’s Riviera Resort, the 15th Disney Vacation Club property, located next to Disney’s Caribbean Beach Resort. Today, Bob Chapek shared new concept art for the resort, as seen above. Inspired by the grandeur along the Mediterranean coastline, the resort will offer great views of nearby fireworks spectaculars and easy access to the Disney Skyliner, which will have a station next to the resort.

Mickey and Minnie showed off their special outfits for their 90th birthday for the first time today at Destination D. Fans can see them in their fancy duds starting January 18th as part of Mickey & Minnie’s Surprise Celebration at the Magic Kingdom, and as a part of Mickey & Minnie’s Surprise Party at Sea this summer on the Disney Cruise Line. But what’s a party without friends? Donald Duck, Daisy Duck, Pluto, Goofy, Chip, Dale, and Clarabelle Cow will also have special costumes for the celebration, which were shown off today.

All the characters – including Clarabelle! – just hit the #DestinationD stage in their #Mickey90 outfits.
And my brain melts from joy. 🎉 pic.twitter.com/MbnEOPbOse

Destination D may be coming to a close, but there’s a lot more to come at Disney Parks in the near future!