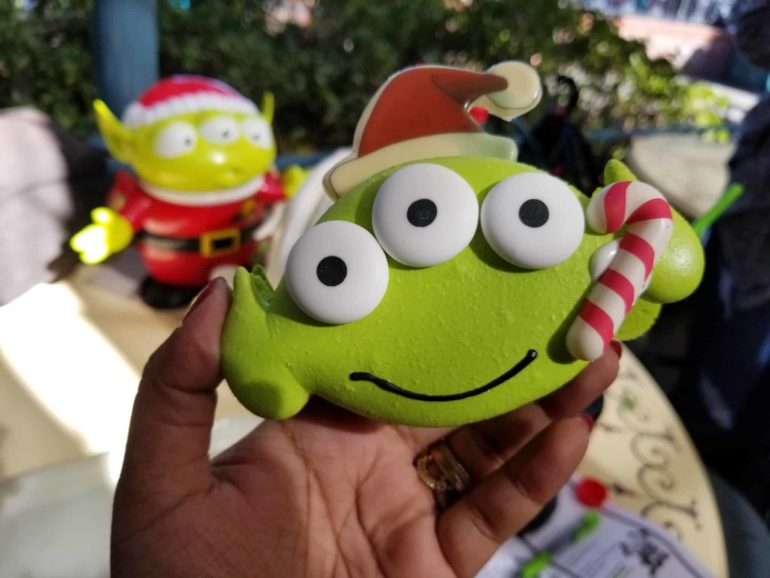 Red Rockett’s Pizza Port may well be the most righteously panned eating establishment in Disneyland’s extended, auspicious history. Anything, be it restaurant, restroom, or trashcan, which elicits sentiment for the marginal Mission to Mars attraction was, well, not good. That the recent Pixar overlay was fairly and instantly well received says a lot.

The menu remains ineffably average, though the kitchen has made some notable advancements in the area of quick-service salad. Still, blameless are those who habitually avoid slogging into the deepest corner of Tomorrowland for disappointing pizza. Up ’til now.

If the holiday additions are any lasting indication, Alien Pizza Planet is worth honest, renewed consideration. “Space Dip” may not have the most appetizing allure, and who can be faulted for eschewing pizza boasting spinach, artichoke, and assorted anything? Don’t be hasty. Even as a nine-dollar quick-service offering, this mere slice of pizza is wonderful.

Flavor-wise, Space Dip fills the galactic void long left by Red Rockett’s cardboard pizza equivalent. I don’t want to be the deciding vote if your family is hesitant to sink $41.99 into an entire pie–my first traffic ticket cost less. A slice or two, though, may be well worth the investment. The renewed enthusiasm for creative dessert will more than justify the effort required to get over here.

Macaron purists may balk at something so, well, eye-popping as this blatantly alien creation. If such a non-traditional offering from a Disneyland pizza place makes you blink, then it isn’t for you anyway. Everyone else who tries it will be pleasantly delighted. As will everyone who gives the new pizza a chance.

They’re sweet. Is a macron that isn’t worth your six dollars? One this large may be difficult to conceive or manage. Once you make the plunge, however, your financial and culinary commitment is instantly validated. Don’t be afraid to bite into the endearing decorative features. Akin to white chocolate accents on wedding cake, they are meant to be enjoyed, not fussed over, and certainly not preserved for any misplaced sentiment.

Unless you have had it here, specifically, you have not enjoyed S’mores in such wholly fulfilling fashion. There is much to be said for savoring the roasted marshmallow-chocolate experience in front of an open fire, but grab it in parfait form with your exceptional artichoke pizza and you’ll wonder whether to ever again go to the trouble.

Disclaimer: this is not the cherished S’mores from your childhood. Disney certainly remains true to the spirit and flavor of this time-honored treat. The marshmallow on top bears undeniable, endearing signs of actual fire roasting. Still, what you will surely encounter, especially if you are mind to share, is the difficulty in enjoying S’mores myriad of tastes and textures off a spoon taken from a plastic cup.

It’s delicious. Chocolate, marshmallow, graham cracker. Most of would be able to relish these mere ingredients out of a Disney fashioned vending machine. But, we must tell you it’s not hot. If you were raised right, you are conditioned to S’mores delivered at the business end of a blistering coat hanger. Given Disney’s appreciation for FDA regulations, and for not scalding their guests, this is a charming alternative.