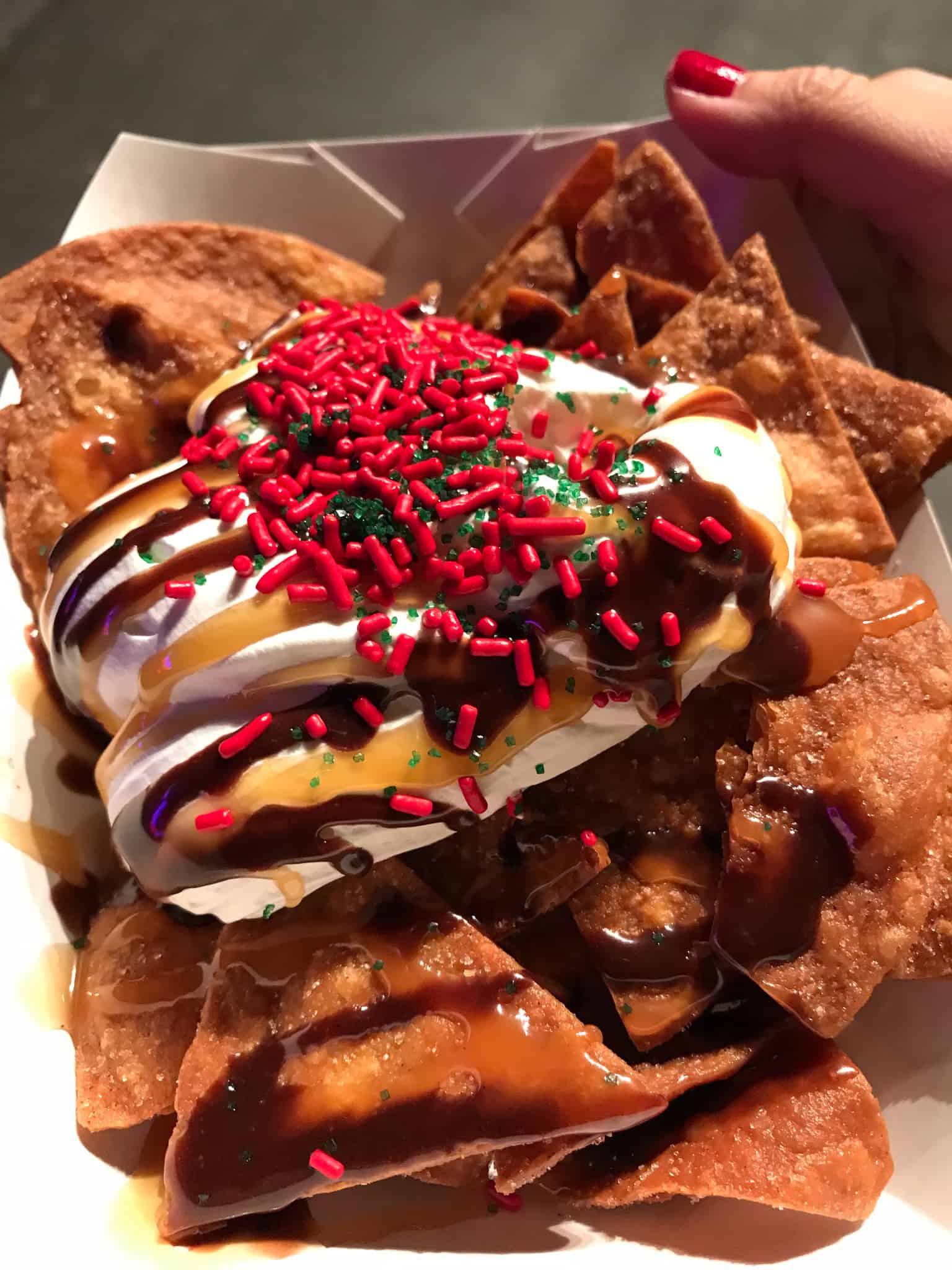 Studio Catering Co. at Disney California Adventure is now offering three new holiday food items. The three items are the Holiday Dessert Nachos, Plant-etarium Street Tacos, and the Holiday Frozen Horchata. Before we go into the details about the food, let’s first make sure everyone knows where Studio Catering Co. is located. Once you get to Hollywood Land, head to the Monster’s Inc attraction. If you’re standing right in front of the attraction, you will see two food locations. Studio Catering Co. is the food truck that’s a bit further away from the Monster’s Inc attraction. Now that we have this out of the way, let’s talk about food.

Dessert nachos sound like a great idea theoretically, but what I received was a let down. The Holiday Dessert Nachos feature cinnamon sugar bunuelos chips, chocolate and caramel sauce, and then it’s all topped off with whipped topping and holiday sprinkles. These are not the same dessert nachos you can get over in Disneyland at Rancho Del Zocalo. My main issue with Studio Catering Co’s version of the dessert nachos is that the chips don’t taste good at all. The nachos taste very artificial and not fresh. The cinnamon sugar is also barely noticeable here. This could be a good thing for some people, or a bad thing for other people.  This one is definitely gets a no from me.

The Plant-Etarium Street Tacos are the best food item on the whole holiday menu here. These tacos are vegetarian tacos. They feature brussels sprouts, salsa verde, pickled red onions, apple and pomegranate slaw. All of that is served in soft flour tortillas. What is noticeable here is how light and fresh the tacos taste. The apple and pomegranate slaw gives the tacos a certain sweetness without making them too sweet. They’re certainly not the best tacos in the world, but I think they’re worth checking out if you’re in the area of Studio Catering Co.

The Holiday Frozen Horchata is the last seasonal offering at Studio Catering Co. The horchata is decent. Decent enough that I don’t consider it to be bad, but I also would not buy it a second time. The cinnamon you usually taste in a horchata is nonexistent, but the horchata still manages to be a bit too sweet for my taste. This is one of those items that you can buy without regrets when you really want to drink a frozen horchata and you’re right next to Studio Catering Co. I would not travel across the resort to get this item though. Again, if you’re in the area, you can definitely go for the Holiday Frozen Horchata.

TONIGHT: A Very Merry Around The Hub on WDWNTunes.com at 9:30pm ET