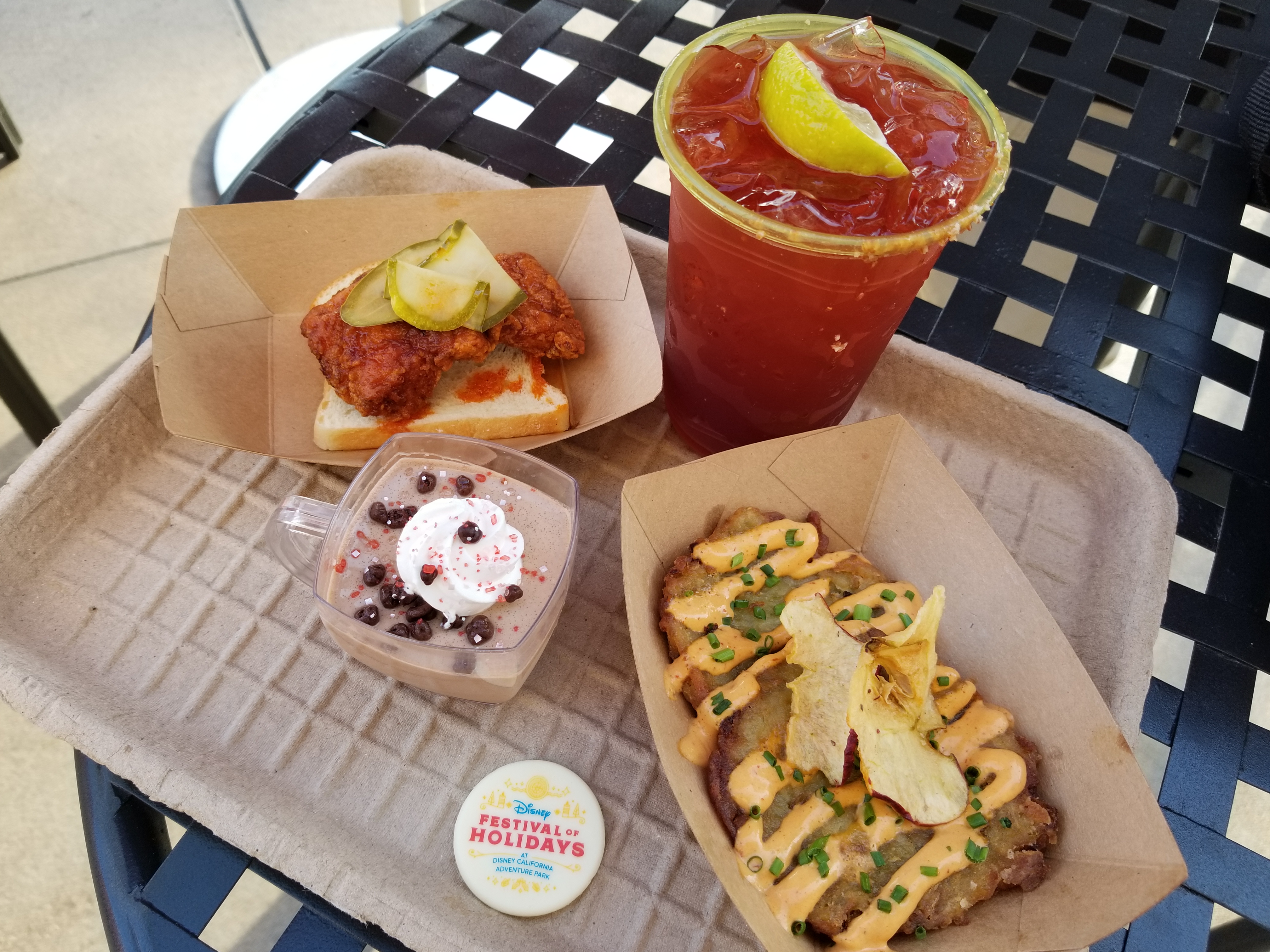 Festival of Holidays has returned to Disney California Adventure, in nearly all its splendor. Oh, it’s wonderful already, mind you, but with the soft opening, before the official November 9 unveiling, there are a number of expected issues. I’m not here to criticize, but if your festival boasts Micheladas, and you aren’t pouring them at the outset, perhaps you ought to recalibrate.

I love it so far. The individual booths, though, are left wanting in regards to a coherent identity. Again, I hesitate to offer something like criticism, especially as it pertains to an added layer of Disney creativity sprawling throughout one of its already incredible parks. Many of the merry mashups, though, leave me as disjointed as the lose association that exists between turkey tamales and lox nachos.

I am a delighted veteran of many an Epcot food, drink, and plant festival. It is foolhardy to compare anything to that. From a Disney California Adventure concessionaire, it is unfair to expect three authentic Greek, Caribbean, or Nordic dishes. That is not the point of the Festival of Holidays. Not saying it ought to be (yes, I am), though if not cultural symbiosis, than perhaps a persistent ingredient or two can bring each booth’s offerings together.

“Spicy Celebrations” does offer a fair amount of flavor that is arguably lacking at a number of the other stations. The Nashville Turkey brings it in the form of heat (see “Spicy”). It’s not terribly hot, which may come as a relief to guests who recall this item at last year’s festival. Where that one was nigh inedible, the 2018 edition is a quality taste and texture combination. It most resembles a boneless chicken wing. Those in search of more exotic fare can truly give this one a pass.

Did someone say exotic? Disney may have created the world’s most edible Latkes. Not sure who thought to lend jalapeno to this oft uninspiring dish, but they deserve all the praise we can offer. The crema is the key; the vehicle for the majority of flavor involved here. Do not be afraid. The jalapeno contribution is arguably perfect. Dried-fruit garnish lends a nice bite to this traditionally soggy snack. If you get only one item from this booth, get the margarita. The Latkes, though, ought be your second choice.

From Disney to our editors, we’re supposed to lend most of our attention and appreciation to the food. Who are we kidding. While a number of the specialty drinks aren’t pouring during the soft open, this Margarita and dessert shot were blessedly available. Disney is working pure magic in the arena of flavored cocktails, and this pomegranate concoction is a fitting addition. The smoky contribution is undeniable, and it brings an attention-seeking Mezcal bite. Margarita lovers shouldn’t miss this, and, truly, it pairs wonderfully with chocolate.

Subtle Chipotle spiciness binds these two, like too few other offerings in this festival. Try them together, then get another of each. Wherever else you go during the Festival of Holidays, “Spicy Celebrations” receives our nearly-unanimous recommendation. But, yeah,don’t knock yourself our with the turkey slab.