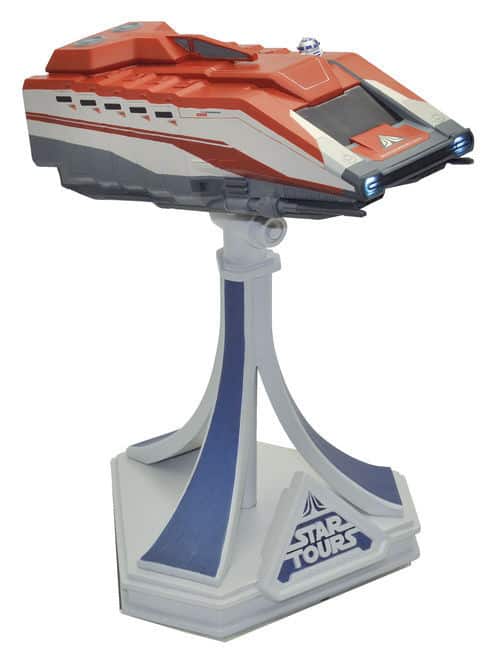 “Just a relaxing trip to Endor,” they said…

Attention all Star Tours passengers: there’s a new Starspeeder 1000 figurine available at Disneyland Paris! If you’re unfamiliar with what a Starspeeder is, it’s the actual ride vehicle used on the attraction and the five other travel agencies that make up the Galactic Tourist Bureau. The figurine rests on a Star Tours stand that’s modeled after the new Star Tours: L’Aventure Continue entrance that opened March 2017.

The StarSpeeder figurine is made of resin and features light-up effects. It can also be taken off the stand. For a mere €149, you too can be cleared for departure!

Possibly the neatest thing about this already-neat StarSpeeder figurine is the fact that it’s the product of a direct collab between Walt Disney Imagineering and the Merchandise Collectibles team… It’s based off of the original 3-D renderings of the ride vehicle, so technically it’d be like owning your own piece of Imagineering! (To scale, of course.)

The figurine is expected to reach other resort stores soon. Would you fork over the galactic credits for this stellar piece?