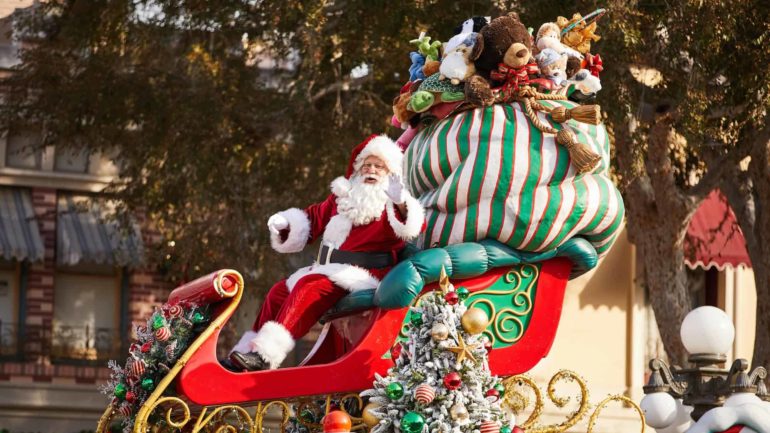 It’s always a magical sight when Santa Claus comes down Main Street U.S.A. in his sleigh… but when Santa’s falling out of his sleigh, it’s a different story.

On Saturday afternoon at Disneyland, the float in A Christmas Fantasy Parade containing Santa’s sleigh broke, tipping over and launching old Saint Nick out of his seat. Thankfully, he was wearing his safety harness, and he was in good spirits as he dangled, waiting for crews to help him out.

Saw Santa almost die at Disneyland today. His sleigh broke and he was hanging by his harness. #disneyland #christmasfantasy #santa #disneylandsanta (For licensing or usage, contact: [email protected])

Micaela Pettigrew (@elaeuphoria on Instagram) caught footage of the event. According to her account, Santa was still interacting with guests during the incident, waving hello and even singing along to the parade music. Once he was safely removed from the sleigh, he walked the rest of the parade route, still as jolly as ever. Twitter user @jaysquivel took pictures of the tipped-over sleigh.

Santa must’ve fallen off his sleigh somewhere… the sleigh broke. No more eggnog for him!! pic.twitter.com/68XxuYmsk6

Maintenance related incidents such as this seem to be becoming more frequent at the Disney Parks these days, but nonetheless, guests left with holiday spirit and a valuable lesson for the season: if you’re planning to travel the world in a sleigh spreading Yuletide cheer, be sure to buckle up. Christmas may depend on it.

VIDEO: Disneyland “A Christmas Fantasy Parade” Back For The Holidays