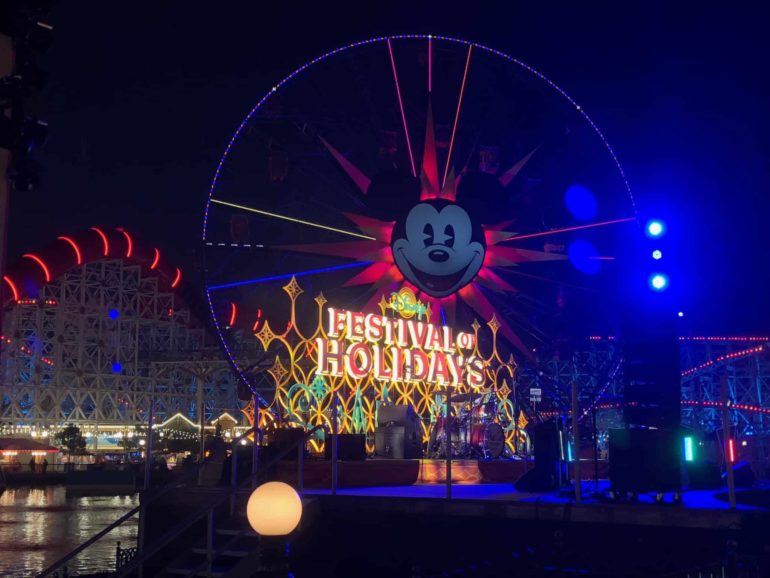 Full disclosure: I headed to Disneyland to acquire the newly released Disney-inspired leggings for myself and a friend (which fit well and are very cute) as well as to see the parks at night as I usually work evenings. I was fully prepared for massive crowds as most of the annual passes were blocked out. I was pleasantly surprised to find no line upon arriving to Mickey and Friends parking structure.

Not only was there no one in line for security, the tram waiting area was empty.

There were trams full of people returning to the parking area. We headed into Disneyland first where again there was no line at the main gate.

Main Street was fairly busy with people shopping and stopping for pictures in front of the tree.

The giant tree still looks fantastic at night and guests were enjoying the music and energy.

Next on my list was to head to the new Tropical Hideaway restaurant for a Raspberry Dole Whip.

There was no line here and the raspberry/pineapple swirl combo was as good as I remember it being.

This area was not very crowded and has quickly become one of my new favorite hangouts. There were a small number of Plumeria Mickey Ear headbands left which were restocked after running out a few days ago. There were plenty of souvenir Piranha sporks left.

Next on my list was to see the projection show on “it’s a small world”, so we headed across the park. I did find the massive crowd of people, who were all busy snapping pictures in front of Sleeping Beauty’s Castle.

Guests were also waiting in lines for pictures in front of the Partners statue.

With the construction wall now taken down, you can enjoy the colorful lights of “Finding Nemo”.

We found “snow” in SoCal!

“it’s a small world Holiday” was fully lit and I was thrilled to catch the projection show right on time.

The show doesn’t last long and runs often, so this is a plus as it wasn’t crowded. It’s definitely worth checking out at night.

DCA was empty compared to Disneyland.

We headed to Cars Land to check out the trees and lights.

There was a bit of a wait to get your picture.

Cars Land always feels crowded because of the narrow street but I was again surprised that it was not packed.

Mater’s is temporarily renamed as the “Jingle Jamboree”.

Fillmore’s tree is made with peace signs.

The Cozy Cone is aglow with orange lights.

Their tree is decorated with traffic cone ornaments.

There is yet another tree inside the Cozy Cone lobby and my favorite pieces of decor were the miniature gingerbread cones.

Not much was happening at Flo’s Cafe but they do have some holiday food offerings.

Cast members and kids were dancing along with the DJ.

Ramone’s got a bit of added decor.

Stanley wears a Santa hat and watches over his town.

Radiator Springs Racers only had a 50 minute standby wait.

The Pacific Wharf area was quiet.

Pixar Pier was also empty other than some small groups headed to rides.

Mickey is missing a spoke of color.

There was still a small wait for “IncrediCoaster”.

The Festival of Holidays was wrapping up for the evening. We did have time to grab two of my favorite offerings from the Winter Sliderland Booth. The Holiday Stuffing Mac & Cheese was great as was the Chocolate Peppermint Pot de Creme.

On the way out, I was amused to see that the giant Grizzly River Run bear’s ugly Christmas sweater lights up and blinks. I’m also loving his hat.

Thanks for taking a quick trip around Disneyland Park and California Adventure. Hopefully you enjoyed all the holiday fun.