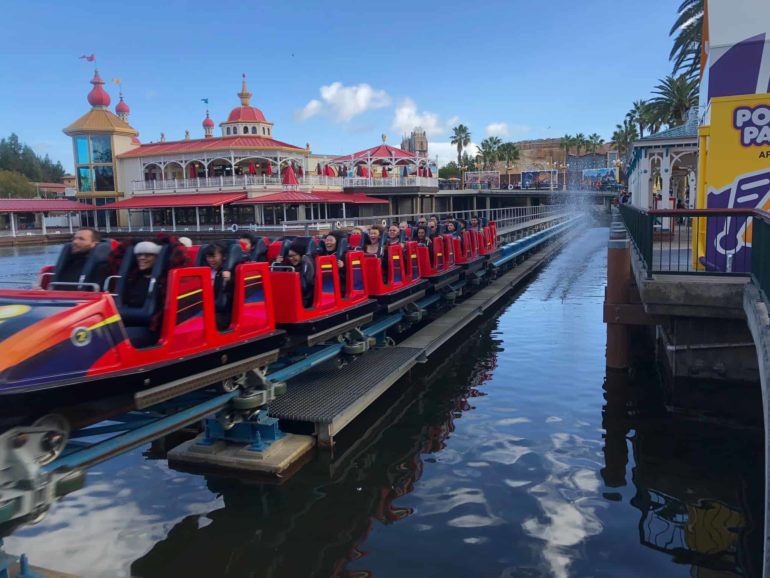 We decided to take a very quick trip around Disneyland Resort on Christmas morning before the crowds became completely out of control. Aside from it taking 40 minutes from exiting I-5 to actually parking, the security line and tram wait was short at 8:30 am. For APs, the parking attendant was clear that ONLY Signature Plus would work that day. Construction was stopped on Christmas Day, but the escalators and layout of the new structure are finally taking shape.

The line getting into Disneyland Park looked busy, so we opted for Disney California Adventure first.

A quick stop at Elias & Co. to check out the new ears available, including the Purple Potion Minnie Ears and of course, these adorable “Up” Ear Headbands! They’re both available for $27.99.

The holiday merch was pushed to the front, but more and more 2019 items are starting to show up.

Seems like the crowds didn’t opt for MaxPass as there were plenty of FastPasses available an hour after park opening. Let’s head to Pixar Pier.

Most of the crowd was heading to Midway Mania or Incredicoaster… until it broke down for at least an hour.

The Poultry Palace and Senior Buzz were big hits for breakfast.

Still no change to Jessie’s Critter Carousel construction other than this strange wall and red paint on the top.

After a Midway Mania ride, we grabbed a Holiday Haunted Mansion FastPass.

Not that we were surprised, but Disneyland Park was crowded.

The one spot that did not seem to have a crowd was the new Tropical Hideaway restaurant. We also spotted Santa in his light-up tree hat.

If you are a bacon fan, try the Bacon-topped Dole Whips. It sounds weird, but bacon fans will enjoy it (for a mere $0.99 extra.)

Upon exiting Haunted Mansion, there were still lots of FastPasses available for the major rides, although standby wait times were long.

Goofy wondering if we’re all nuts for being here on Christmas Day.

Even the line for the train was full and wrapped down the stairs.

I can’t even imagine how long this City Hall line was going to take.

Getting crazy busy before the parade. Time for us to go.

Lines to get into Disneyland Park were now at least 50 people deep around 11:30 am. However, across the esplanade, the DCA gates were empty.

At 11:30 am, Downtown Disney wasn’t busy. Seems like DCA and Downtown Disney may be the way to go on Christmas Day if you’re okay with skipping the parade and don’t want to fight crowds.

Last stop is Ballast Point construction. Workers were off today, but we did catch a glimpse of these stacked chairs by the windows.

On the way out, the security line was now using the entire queue area… so early is definitely the way to go on Christmas.

This was my first time braving Christmas Day at Disneyland, and aside from taking a long time in the parking line, it was doable. It’s worth paying for MaxPass if you want to get on rides, but keep in mind getting into Disneyland Park takes awhile, so plan accordingly… park hopping won’t be easy. Restaurant reservations were gone, but an early lunch walk-up would have been feasible at Downtown Disney. Perhaps we’ll visit Ballast Point next Christmas!