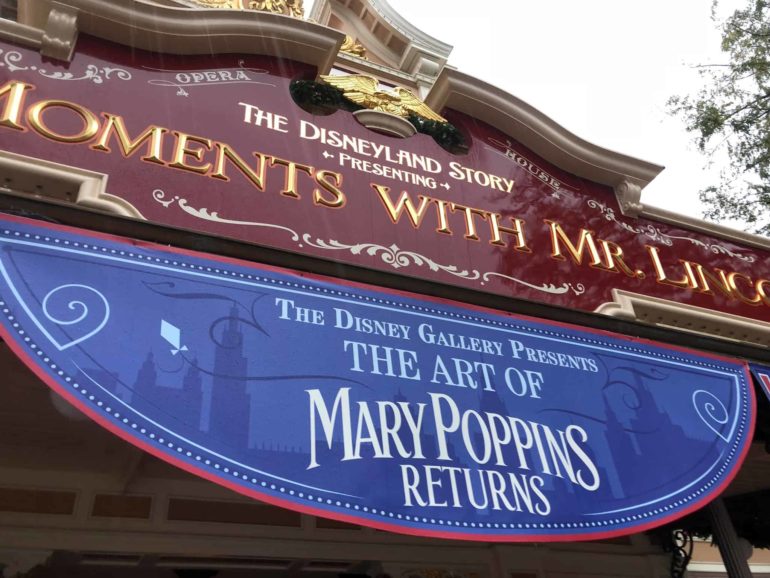 PHOTOS: The “Art of Mary Poppins Returns” at Disneyland

To celebrate the release of “Mary Poppins Returns” on December 19, 2018, a new exhibit has opened at Disneyland. The Art of Mary Poppins Returns features costumes, props, artwork, and clips from the upcoming film. The exhibit is to the right upon entering the Great Moments with Mr. Lincoln lobby on Main Street, USA.

We were a bit underwhelmed with the lack of memorabilia (three props and one costume) but it is definitely worth checking out if you are a Mary Poppins fan. We enjoyed it as a dry break on a particularly rainy day.

You are able to see the kite up close as well as the carpet bag and umbrella.

There is also a costume designed by Sandy Powell and worn by Emily Blunt in the film.

There is also a handful of original artwork hanging around the lounge.

The artwork is charming in true Mary Poppins style.  There are a variety of items available at both Disneyland and Walt Disney World to celebrate the upcoming film including Mary Poppins themed desserts with souvenir spoons at Disneyland and a Mary Poppins Returns merchandise line at Disney Springs. We have quite a few articles with the new trailer and Back To Cherry Tree Lane Featurette.  More information on the exhibit can be found on the Disney Parks Blog.