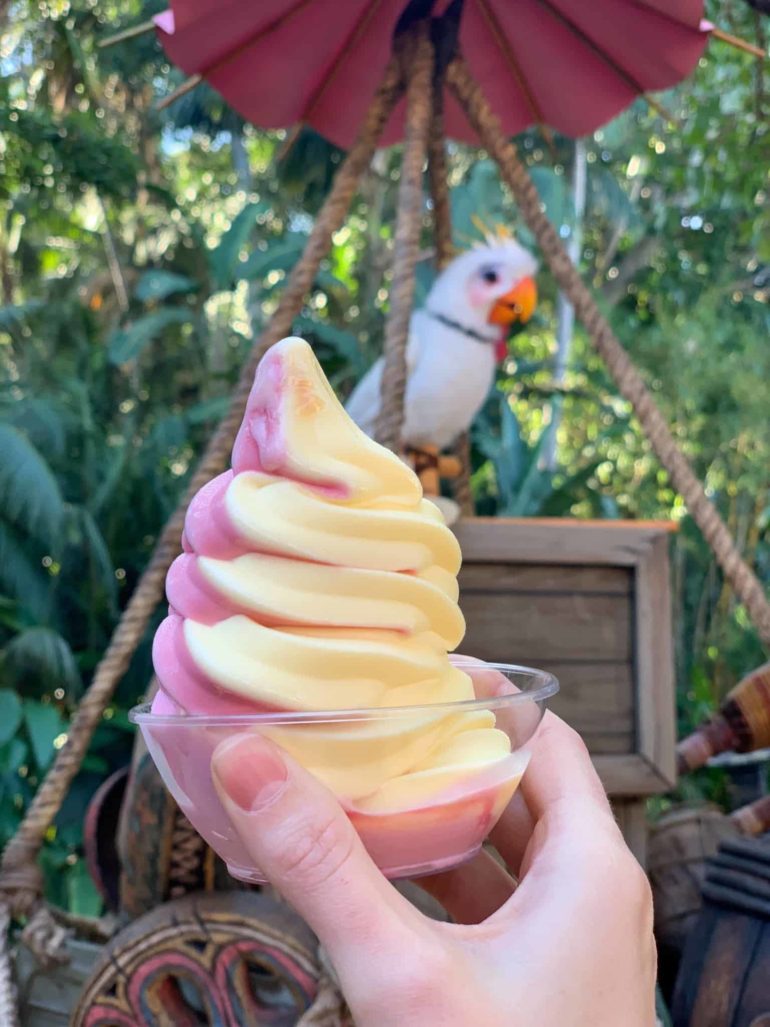 Today at the Disneyland, the long awaited Tropical Hideaway in Adventureland soft-opened to guests. The new establishment replaces the long-shuttered Aladdin’s Oasis, former home of the Tahitian Terrace. It’s nestled between Walt Disney’s Enchanted Tiki Room and The Jungle Cruise, encompassing lore from both classic attractions, as well as a number of other past and present Disney rides and more.

The Tropical Hideaway is right at home in the jungles of Adventureland. We begin with a video tour:

A new tiki good is holding the sign up if you look at the back.

Signage entices guests over the bridge.

The tile magic carpet was left behind as a nod to Aladdin’s Oasis.

Some other minor elements of the former offering remain as well, but they fit nicely.

The location offers bottled and canned beverages, as well as some pre-packaged snacks, but the standouts are the Dole Whip creations and new hot items.

Dole Whips can now come in Orange and Raspberry in addition to Pineapple, and special swirls mixing them are available. There’s also a special loaded whip the allows cast members to bang a gong and announce, as you can see in the video at the top of this article.

Lumpia and bao buns round out the remainder of the menu.

Above, guests will find the “homes” of the birds from the Enchanted Tiki Room.

The seating area is nicely shaded.

As you enjoy a treat, you can hear some antics from the “long lost” Rosita, an audio-animatronic bird representing a character briefly mentioned in the Enchanted Tiki Room.

Nearby, guests will find access to the Enchanted Tiki Room, where they are invited to enter with their acquired treats.

The walkway leads to stairs to enter the Enchanted Tiki Garden.

For all you Disney trash can lovers out there…

In a post to follow, we’ll review all of the new treats available at the Tropical Hideaway (although cast members have said more will be added later).

So, what do you think of the new Tropical Hideaway at Disneyland?