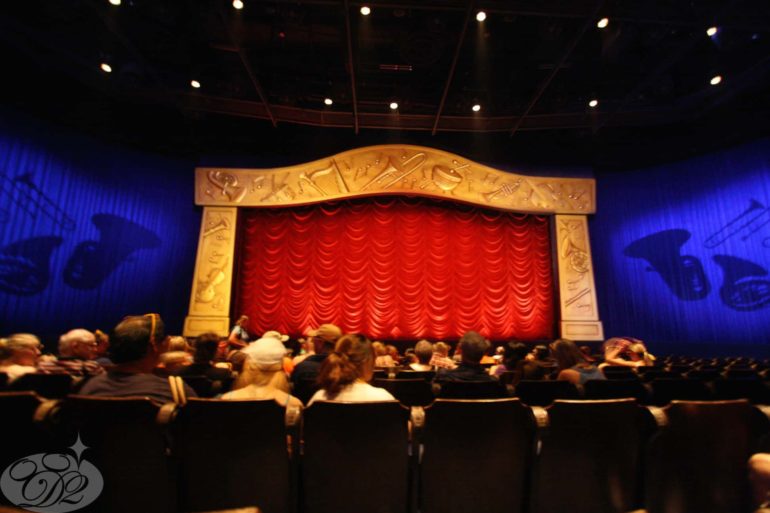 Ride, show, or restaurant, you have more control over where you sit than you may realize

Seeing a show in the park, boarding a ride, or even going to a table-service restaurant where you have a reservation is always risky if you’re particular about where you sit. Even if you have VIP seating for a show, you’re still not guaranteed that someone taller won’t sit in front of you or hoist a child onto their shoulders just as the show starts. Blocking the seats around you with bags and jackets isn’t just frowned upon, it’s prohibited. In attractions with rows of seating, you’re probably all too familiar with the boarding directive, “Continue all the way down the aisle to the next available seat. Do not leave any empty seats…”

So… if you’re like us in these situations, you’re already taking inventory of everyone in your immediate vicinity, whether you’re in a queue, a pre-show “holding area,” or being led through the restaurant to a specific table. You’re paying particular attention to young children and who they belong to. If they’re happy, well-behaved, attentive, or excited, you might be fine, you tell yourself. Kids aren’t so bad when they’re engaged in the experience instead of whining about it, you tell yourself. But then, sometimes the kids aren’t the problem. Sometimes, it’s the parents who feel the need to explain every scene—or worse, photograph it, and in so doing become an unwanted source of illumination! Or perhaps they’re just loud while reprimanding—or worse, they’re not reprimanding at all, but letting the bad behavior go unchecked. There are any number of ways—and combinations thereof—for your ride, show, or dining neighbors to spoil—or, at the very least, diminish your experience.

But what can you do?

Start by being aware. Make note of the people around you and try to identify any and all available options should you need to take evasive maneuvers. You almost always have a shot at saving yourself if you see the need coming.

When you’re in a single-file queue…

When you’re all clumped together…

If you’ve ever watched the beginning of a horse race, when all the horses are led into their gates and some go willingly while others rear up and refuse to be led, that’s not unlike the feeling we’ll have as we try to jockey our position away from the projected problem children—and/or their parents. True, your assessments of who’s going to be loud and disruptive (having nothing to do with age) is never going to be 100% accurate—the most well-behaved child might have the least well-behaved parent. Still, it’s worth trusting your gut and going with your instincts. At least you will have made the effort and then you can laugh together at how “off” your judgment was.

Based on our experience, we’ve found a few ways to minimize the pain of sharing an attraction with tantrum throwers and non-stop talkers:

When you’re at a sit-down restaurant…

There’s nothing like being led into a near-empty restaurant only to be brought to a table right next to one that’s occupied. It almost doesn’t matter whether you’re seated next to another couple or a family of eight spanning three generations. You were expecting to have an intimate—and potentially romantic—dining experience, and instead, you’re going to feel like the third wheel in someone else’s party and aware of every word you say—or don’t say—because of the proximity to others. While the family probably won’t notice your presence, the couple will instantly feel the intrusion, and the guilt shouldn’t be on you.
Even if you’re uncomfortable or self-conscious about requesting a different table, it’s not at all like sending a dish back to the kitchen. Plus it’s guaranteed that the couple will be grateful for your consideration, and the family won’t raise an eyebrow much less take it personally (even though they should!). Here are our best tips for making your dining experience more to your liking:

Wherever you are and whatever you’re doing…

The one thing all these tips have in common is being aware of those around you. Even if you don’t have much maneuverability in your particular situation, you can make certain adjustments to better your circumstances:

Bottom line: You almost always have more control than you think—even when you think you have none. When you take the time to look around, strategize, and be willing to voice a request to better your situation, your experiences will be more positive and you’ll soon be toasting your successes over a romantic Disney meal.