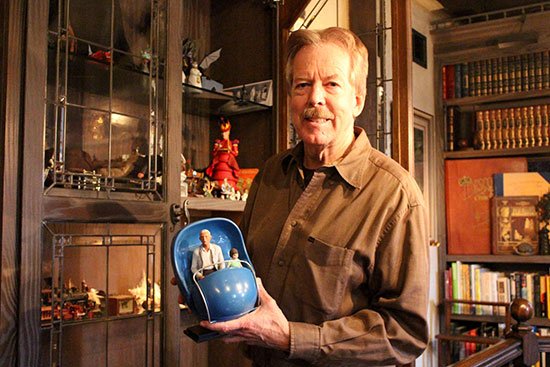 If you’re a fan of the Disney Parks, you’ve probably heard of Tony Baxter. In fact, it’s difficult to imagine a day at the parks without enjoying something Tony Baxter had a hand in creating or influencing. After all, this is the man who impacted our childhoods with park staples such as Star Tours, Splash Mountain, and Big Thunder Mountain Railroad. Today, Tony Baxter is a former senior vice president of creative development and official Disney Legend with his own window on Disneyland’s Main Street, U.S.A. Since Baxter’s portfolio is so impressive and packed with headliner attractions, I thought it would be fun to rank my top 5 favorite Tony Baxter Imagineering projects!

Disclaimer: My list is just that. Mine. This is all for fun, people! So here’s the deal. Comment with your top 5 favorites and let me know if you agree or if you disagree. Half the fun of being a fan is sharing and discussing why we love what we’re passionate about. So share your list and let’s talk!

This was a hard decision! I was caught between Star Tours and the Journey Into Imagination Pavilion for this slot. In the end, as you can see, I picked Star Tours. The original version, that is. (I have issues with Star Tours: The Adventure Continues, but that’s an article for another time…) Anyway, the original Star Tours was piloted by rookie droid pilot Rex and was supposed to take guests on a tour of the Endor moon from Return of the Jedi. Due to Rex’s inexperience, guests ended up everywhere where they shouldn’t be. The best part? In the trench run on the Death Star from A New Hope! The attraction debuted at Disneyland in 1987 and later at Disney-MGM Studios in 1989. Star Tours: The Adventure Continues opened in both parks in 2011.

Why It’s My Pick: While Star Tours is a simple simulator attraction, it did usher Star Wars into the parks and helped cement the relationship between Disney and Lucasfilm. Considering what’s being built at Disneyland and Disney’s Hollywood Studios at Walt Disney World as we speak, that was only the beginning. If Baxter and his fellow Imagineers only knew… Anyway, I must commend Baxter and the Imagineers for perfectly capturing the spirit of a franchise that wasn’t their own and making it work for the Disney Parks.

Tony Baxter was the executive producer of Disneyland Paris. While this particular Disney Resort has had its struggles, this resort’s Disneyland Park is one of the most beautiful Disney Parks ever constructed. It strikes the familiar chords of the original Disneyland and Walt Disney World’s Magic Kingdom, but it has its own showstoppers and unique enhancements. I mean, there’s an audio-animatronic dragon under the castle. A dragon!

Why It’s My Pick: The Disneyland Hotel at the entrance is genius, I love Big Thunder Mountain on its own island, along with all the paths through Adventureland, and I still hold the opinion that Discoveryland is the answer to our Tomorrowlands here stateside. The park is a work of art which stays true to what we know and love but is presented in a way that’s true to its home country and fresh for fans of the Disney Parks.

Perhaps Tony Baxter’s most famous attraction, Big Thunder Mountain Railroad, debuted at Disneyland in 1979 with a sister version opening soon after at Disney World’s Magic Kingdom in 1980. This family-friendly coaster satisfied guests looking for a thrill while continuing the Disney Imagineering tradition of immersive storytelling, details, and realism. Baxter has remarked that Big Thunder is convincing because it looks like the coaster track was built around the rock work, as opposed to the rock work being built around the coaster track.

The original Big Thunder Mountain Railroad at Disneyland also managed to pay tribute to the park’s history. Built in the space once occupied by Rainbow Caverns Mine Train (later called Mine Train Through Nature’s Wonderland), the ghost town at the end of the ride is actually a survivor from its predecessor.

Why It’s My Pick: This attraction is somewhat of a modern classic in my opinion. It ushered in attractions for a new generation all while offering rich, layered storylines involving the supernatural, weather, nature, and history. It’s anything but lazy with so much detail that you may never see it all.

After the success of Star Tours and Captain EO, Disney and Lucas teamed up again for an Indiana Jones attraction! While the original plan was much more ambitious, the Indiana Jones Adventure we know today debuted at Disneyland’s Adventureland in 1995 and became an instant hit. The story is that guests board “troop transports” bound for the Temple of the Forbidden Eye where Indiana Jones has gone missing. While the scenes and effects are fantastic, the real star is the ride vehicles.

Known as Enhanced Motion Vehicles (EMV), the Indiana Jones Adventure ride vehicles are simulators. The top shell of the vehicle is programmed to pitch side to side or lean backward and forward and bounces up and down independently of the chassis. So you may feel like you’re going uphill or over bumpy terrain; but in reality, you’re not. This ride system was also used for Animal Kingdom’s Dinosaur attraction at Walt Disney World; but while I love the Indiana Jones Adventure, I can’t say I feel the same about Dinosaur. Anyway, the big highlight of the Indiana Jones Adventure is the famous rock roll towards your vehicle, just like what Indy faced in Raiders of the Lost Ark. However, your vehicle isn’t actually moving backward, the walls are! This illusion came from Baxter himself who thought it up while going through a car wash!

Why It’s My Pick: I never ever get tired of riding this attraction. It’s at the tip top of my list every time I walk through the Disneyland gates. Also, it’s rare to have a thrill ride that’s not a coaster at any theme park these days. I love the number of scenes guests pass through and sensory effects employed to heighten the whole experience. Plus, it may have one of the best queues ever! The jungle trek to the Temple of the Forbidden Eye, the halls through the temple itself, and the old-school film clips drop guests into the story long before they board their ride vehicle. It’s definitely the best of the best! The story is that Tony Baxter first thought up Splash Mountain while stuck in traffic. In order to compliment Disneyland’s Frontierland theme, Baxter thought of using characters from the film Song of the South. Originally called Zip-a-Dee River Run, the attraction’s name was changed to Splash Mountain to satisfy then-CEO Michael Eisner who wanted to promote the live-action film Splash, which oddly has absolutely nothing at all to do with Song of the South. Anyway, Splash Mountain debuted at Disneyland in 1989 and then at Disney World’s Magic Kingdom in 1992. To this day, it’s an incredibly popular attraction and often tops the list of guest favorites!

Why It’s My Pick: Splash Mountain is a thrill ride, a dark ride, and a flume ride all in one. It’s also a long ride! Disney World’s Splash Mountain ride time is nearly twelve minutes, guaranteeing a satisfying payoff for those who endured those peak wait times. Also, in true Disney fashion, this attraction carries you through a story which gradually builds in intensity, climaxes at the point of danger, and then ends with a glorious finale. I think it’s a great attraction for families as it offers something for every member, and besides, that 50-foot plunge is like a rite of passage! Finally, is there any other song that perfectly captures the feeling of a day at a Disney Park better than “Zip-a-Dee-Doo-Dah”?

So those are my top 5 favorite Tony Baxter Imagineering projects, but I want to hear yours! How do you rank Tony Baxter’s attractions?