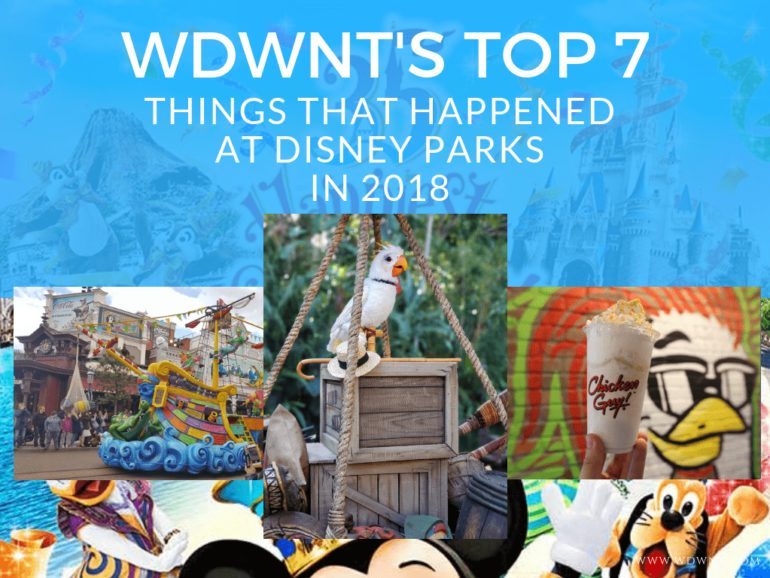 As 2018 comes to a close, we look back at some of the greatest moments in Disney Parks this year. While it wasn’t the most positive year for the parks in many ways, there’s still quite a few new things to be thankful for. So, in no particular order, here are the seven (yeah,…. seven) best things from 2018 (in our opinions, of course).

Be sure to read more about each of them by clicking their titles.

This one barely made it into 2018, but it squeaks in with just days remaining. How were we not going to like this? It’s a restaurant themed to the Enchanted Tiki Room, the Jungle Cruise, and more from Disney Parks lore, of course we love it!

Disneyland Park is trying to make the most of all the space they have before Star Wars: Galaxy’s Edge opens next year, and this was a great way to make use of the often-abandoned Aladdin’s Oasis. While not all of the food was amazing, we’re still happy with the overall project.

While it returned in April for the already forgettable Pixar Fest at the Disneyland Resort, it wasn’t until June when the new Incredibles float debuted in the Paint the Night parade. The float was pleasant surprise, equaling, if not surpassing, the quality of the Frozen float that it replaced. Sadly, Paint the Night is gone again, but hopefully it will return soon to Disney California Adventure (or any U.S. park really).

When we first heard about a “Planet Hollywood counter service restaurant”, we all figured the worst. Needless to say, it was surprising when a well-priced and quite delicious fast food chicken restaurant opened at Disney Springs. In a place chock-full of fantastic table service restaurants, it’s nice to have another quick option, especially so close to the AMC Theaters.

Festival of Pirates and Princesses

It wasn’t a landmark year for Disneyland Paris, but they did roll out the most fun new entertainment offering at any Disney Park around the globe, in our opinion at least.

The star of the event was “Disney Pirate or Princess: Make Your Choice”, which was half-parade, half show. The two parades would traverse the park, then collide in the central hub for a “dance battle” of sorts. Guests and cast members made the offering memorable by memorizing the choreography and teaching it to anyone around them who wanted to learn. Oh, and did we mention the music? I still can’t get the catchy tunes out of my head all these months later. Thankfully, this will all return in 2019!

While I’ve always liked Disney’s Caribbean Beach Resort, a remodel was in order. The separation of the check-in facilities from other vital functions of the resort was always strange and that was finally corrected when the new “Old Port Royale” opened a few months ago. Add in a new table service restaurant, new counter service dining, and a pretty sweet new lobby, Caribbean Beach Resort is in a good place right now ahead of the opening of the main Disney Skyliner terminal on its grounds.

Disneyland Resort is different from Walt Disney World in that counter service often outshines the table service offerings there, so having the ability to grab a bite without waiting in a long line is pretty great. The ability to mobile order a dole whip and/or Bengal Barbecue and you can understand why this was one of the most important additions of 2018.

Not that they don’t always, but Tokyo Disney Resort stole the spotlight from every other Disney destination around the world in 2018 with the “Happiest Celebration”, a year-long event marking the 35th anniversary of the Oriental Land Company operated hotspot. An amazing update to “it’s a small world”, an unbelievable new daytime parade called “Dreaming Up”, a fantastic new nighttime show in “Celebrate Tokyo Disneyland” would all be enough, but there was so much more to this event.

Incredible decor, special entertainment touches, remarkable merchandise, and tons of delicious (albeit some strange) snacks rounded out the line-up that was simply unbeatable.

As you can see, 2018 has been quite a great year for Disney Parks fans…