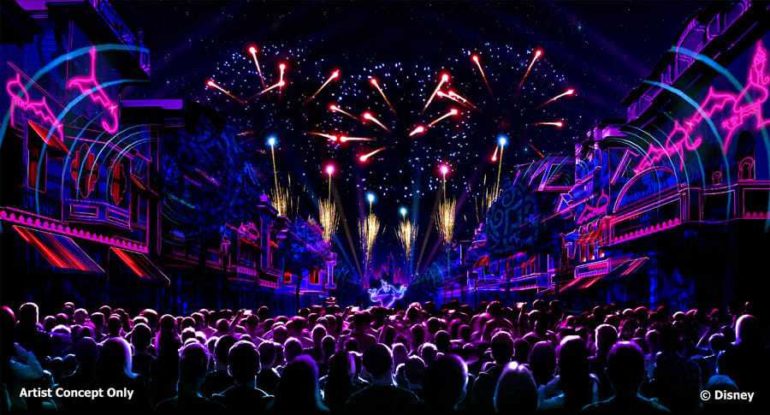 We were able to confirm the arrival of Mickey’s Mix Magic at last year’s Destination D, where we learned the new nighttime fireworks and projection show would be coming to Disneyland on January 18, 2019 with “all-new music, projections and lasers that set the scene for an epic dance party that takes over almost the entire park.” Now Disney has released the full playlist for the show and some additional details that are sure to make this a can’t-miss event.

So here are all the details on the Mickey’s Mix Magic show, which will feature a combination of projections, lasers, lighting, and water screens on Rivers of America and the façade of “it’s a small world”. The nighttime show will last 10 minutes and will feature kaleidoscopic projections to some of our favorite classic Disney tracks. The full playlist for the show is as follows:

It’s an interesting selection of songs, to be sure. “Everybody Wants To Be a Cat” and “Friend Like Me” are sure to be some of the best visuals of the show, due to the nature of the songs and the scenes from their movies. “Let It Go” is also an interesting choice. Perhaps this is an attempt to promote Frozen 2?

But wait, there’s more! As a special bonus, the show’s main track, titled “It’s a Good Time” by The DeeKompressors is now available on Spotify and iTunes!