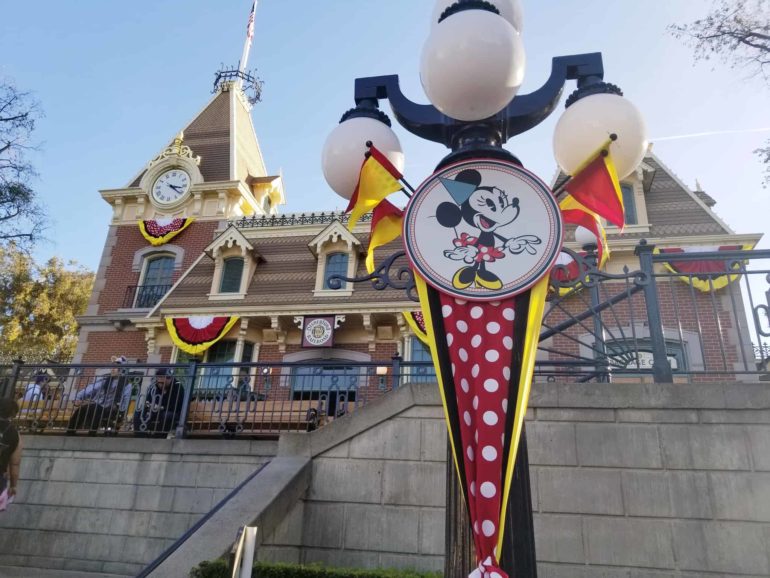 PHOTO REPORT: Disneyland Resort 1/25/19 (Get Your Ears On, Tons of Refurbishment Projects, ETC.)

There is rather a lot going on at The Happiest Place on Earth, as Disney appears eager to combat the concept of a slow season.

The significantly well-attended Festival of Holidays has given way, immediately, to the brand new “Get Your Ears On” Celebration. This year we recognize ninety years of magical Mickey and Minnie Mouse memories. The Disneyland Resort is inviting guests to help commemorate the milestone with special engagements, decor, food, and, absolutely, merchandise.

Get Your Ears On

Slowly, and still understated, on might say, decorations are surfacing. Though this is how Pixar Fest began, before it caught steam. Banners and bunting abound, in classic Mickey and Minnie Mouse coloration. Yes, the original colors were black and white (black and grey for you purists). The now traditional red, black, white, and yellow make for a slightly more festive atmosphere.

Mickey’s Mix Magic Fireworks Spectacular is an early and definite highlight of the new observance.

Delightful Disney Cast Members stand ready to respond to inquiry, and mostly act as a sounding board for inconvenienced guests.

Guests are all “delighted” to learn they can’t cut through the castle at all, not even via the western walkway, which is currently unaffected by fencing. That particular path is for visitors of Bibbidi Bobbidi Boutique.

A few attractions are down for a spell. Astro Orbiter central among them. On the walls is a history of Disney’s spinning Tomorrowland attractions.

A signature photo spot is now mildly less familiar. The giant teacup in front of Mad Hatter gift shop has been removed. No official word on whether this is a permanent development. One can hope the pavement outline remains to herald the charming photo ops eminent return, rather than to mark is final resting place.

Renovations are also taking place on the other side of the entrance plaza.

Pacific Wharf, Grizzly River Rapids, and, of course, the future home of Marvel Land are seeing the most extensive work.

Grizzly Peak Pass is also currently closed. The photographer braved a rather exemplary smoking section to bring you this shot.

Valentine’s Day will soon be upon us. Appropriately themed items are already making their way into the parks.

We are loathe to take sides (no, we’re not), but if you purchase even one thing during a current visit to Disneyland, make it a Strawberry Cheesecake “Funnel of Love.” Available now at Stage Door Cafe. Big enough to share, though you won’t want to.