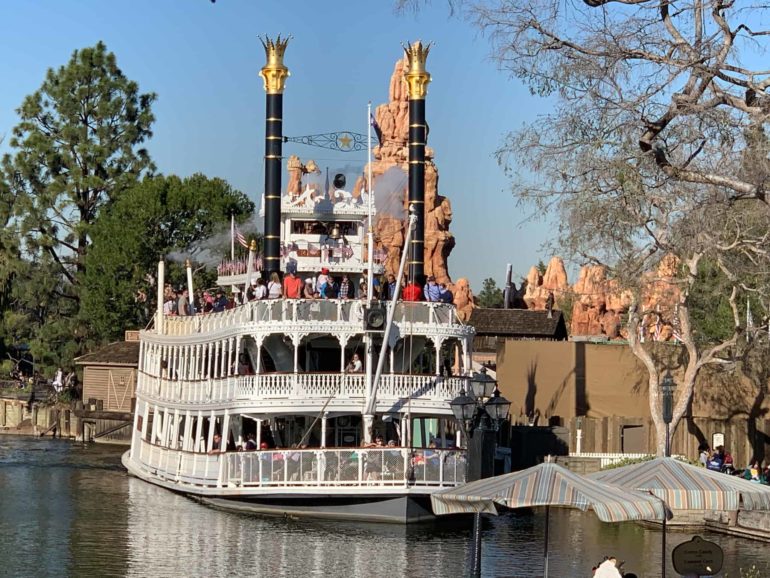 While construction fences have been up for the Sleeping Beauty Castle refurbishment for a couple weeks now, the screens around the castle now go much higher and scaffolding can be seen. This is a huge eyesore as it can be seen all the way down Main Street U.S.A.

Heading through Frontierland towards the Rivers of America, you can see that the loading area for the Mark Twain Riverboat and Sailing Ship Columbia is behind construction walls.

Don’t worry though, you can still board the ships for a journey around Tom Sawyer’s Island. They have moved the entrance off to the left side of the fences.

Over in New Orleans Square, French Market is also under refurbishment.

The tarps have been removed over the outdoor seating area and screens cover the upper portion of the building.

Both French Market and the Mint Julep bar are still open, so you won’t have to go without your beignets!

The front of the park is all decked out for Valentine’s Day.

In Town Square, there is a new Valentine’s Day photo-op.

These adorable Valentine’s balloons are available in red and pink!

Over in Disney California Adventure, refurbishment continues on Grizzly River Rapids, which has been completely drained.

The lagoon around Pacific Wharf has also been drained.

Over at Lamplight Lounge, there is even more work being done. Lamplight Lounge only opened at the end of June, so it’s surprising to see parts of it already behind screens and scaffolding.

Over on Pixar Pier, it looks like more work is underway with Jessie’s Critter Carousel as these red fences have been added and now block the water feature and area used for meet and greets with the Incredibles characters.

I know this photo report was mostly construction, but it’s the off season at Disneyland which means construction season. I’m happy to see them be able to work on things such as the boat loading area and French Market without removing the offerings all together. While it may be frustrating to see a sea of construction walls on your visit to the park, it’s a necessary step towards improvement and and easing guest flow.

Is all the construction giving you the blues, or are you excited to see the improvements to come?