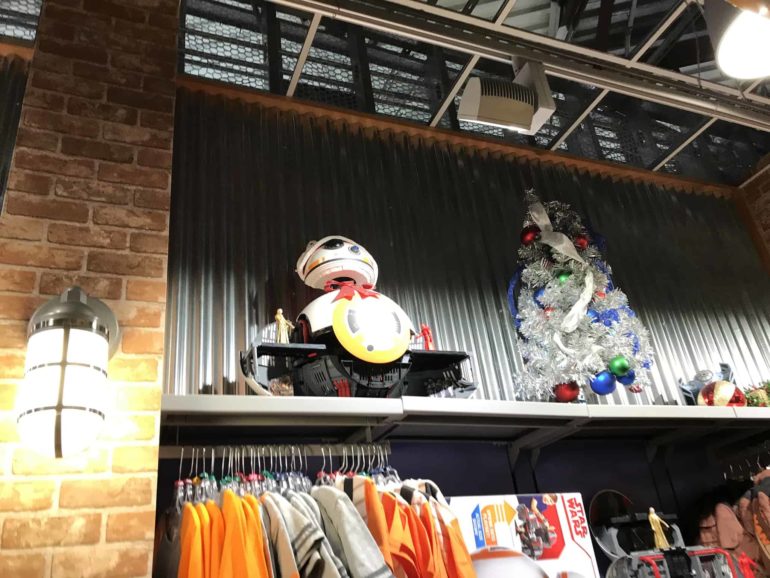 We here at WDWNT braved the holiday crowds to bring you the last outlet review of 2018! Throughout the year, it’s always fascinating to see what makes it to the outlets, be it from mass-produced and under-sold items, to randomly returned park purchases. The layout of the store is always changing to accommodate new goods, and seeing friendly CMs (while shopping to Disney music) is always a great treat. Heck, when it gets crowded, it even makes you feel like you’re really at the parks! Well, we’ve got a lot of window shopping to do, so pull on those yellow straps and let’s get started on this December installment of the Disney Character Warehouse Outlet Report.

As always, I make a point to say that the Sawgrass Mills location in Sunrise, FL is a great spot if you’re ever in South Florida or are flying in or out of FLL. However, it can be a bit of a *cultural* experience in that it’s not uncommon to have the store next door blast reggaeton so loud you’re basically browsing pins to Pitbull songs.

The ambiance was particularly festive, with Christmas displays proudly featuring some of the items available for sale at the outlet.

My biggest mistake was not inquiring about that Hanukkah globe.

Right when you enter, Epcot 35 mugs, as well as some geometrical mugs, are basically screaming at you to buy them. They’ve been at the outlets for a while and need homes.

These 2018 Minnie tumblers were also on sale.

While most of the Dooneys in this display were covered in our last outlet review, there seemed to be a new one out of the bunch…

This Food and Wine satchel was a steal at under $100. If I didn’t already have the 2017 one, I totally would’ve gotten this one. (Although it’d make more sense to keep the collection growing, right? #DisneyMath)

This giant basket of hats was also at the entrance, meaning they’re also desperate for people to buy them. Lots of Epcot 35 hats in there still.

These Princess figural mugs were kind of tacky, but cheap enough for people you have to buy presents for.

I thought these emoji ornaments were kind of cute, especially for $2.99.

These kids spirit jerseys were just $9.99!

They always have some kind of Pirates merch at the outlets. This month, it’s these Jolly Roger Dorbz figures. These were $14.99, down from $29.99.

They always change up their displays at this location, and this large BB-8 figure caught my attention…

Turns out the beloved droid opens up into this First Order playset! This was massive and I kind of wanted it. It’s like the Barbie Dream Mansion of Star Wars. This was priced at $99.99.

I’m not even entirely sure what these things are, but they were $12.99.

I love me some ride-specific merch! This Kilimanjaro Safaris crossbody bag was just $9.99.

These emoji backpacks are from Disney Cruise Line, much like most of the merchandise at the outlets. However, at $12.99 (down from $34.99), you could buy your kid a cute new school bag without breaking the bank.

A few cell phone cases also make it to the outlets. The majority of cases were for iPhone versions 6s through 8, with a few Galaxy cases as well. These were $7.99, down from $39.99. There were also some Star Wars cases!

When these large Tsum Duffies first arrived on the outlet scene, they tried selling them at full price ($16)… now they’ve got more Tsums than they can handle and they’ve marked them down to $7.99.

They had 2018 Flower and Garden Minnie plushes, Snow White (and some BatB) Ufufies for $2.99, and these cute, fluffy Tiggers from Shanghai:

These were incredibly soft and only $9.99!

Some more hats. Most of them were in the $7.99 region. If you can read this, thank WDWNT!

If you’re interested in World Showcase toothpick holders and can’t make your way out to the park, these were just $2.99. The mugs and wine glasses were $3.99 apiece.

They had these clip-on, interchangeable bows for Mickey ear headbands at just $4.99 each.

It was fun to see the detailing on some of these. Just look at that Madame Leota one!

The Tiki Room one is cute enough to supplant the Plumeria Ears from The Tropical Hideaway.

Here you can see it was the “Featured Item” of the month along with the BB-8 “Mega Play Set”.

They used to house art prints in little crates for you to sift through, but now they’ve set up this neat art wall! Prints were in the $19.99 range with the Miss Mindy figurines in the $65.99 range, down from $118.00.

They even have a few Maruyama prints! I turned around and that Hipster Minnie print was gone.

These Solo-themed Loungefly bags were kinda cute. The wallets were $24.99 (down from $50.00) and the mini backpack was $29.99. (Never pay full price for Loungefly bags, people. Pleather peels in Disney heat!)

Speaking of Her Universe, these Rey dresses were $41.99, down from $59.99. Note the other Cherry Tree Lane dresses available in that same rack.  (They’ve been around for a few outlet cycles, too.)

They had this entire collection of Little Mermaid home decor which seemed pretty inspired.

Getting Poseidon’s Fury vibes from these mugs. (Oops, wrong park!) They were $7.99 and seemed really sturdy.

These tiny bowls were nice, too. I think they’re based off Fantasyland icons/rides? The top one is Mine Train, the middle is Cinderella Castle, and the bottom one is Journey of The Little Mermaid.

That scene at the bottom reminds me of The Little Mermaid animated series. (Bonus points if you get my caption!) Also, the bowls are $9.99, down from $22.99.

I love Wilderness Lodge merch and this seems like a really creative, on-theme candle holder.

They had these interesting ride-themed tiny bowls. I would’ve gotten this Small World bowl if it didn’t oddly remind me of an ashtray.

If you’re looking for some adult Disney bedding, they had these interesting quilted comforters for $74.99.

If you own a Monorail set, you can purchase the Cinderella Castle Monorail toy accessory for just $24.99 at the outlets.

Stitch is our guiding light at the outlets. He even knows Spanish!

Well, that about wraps up our last outlet report for the year. While the running joke tends to be the number of items that tend to linger over the months, the reality is, there’s always something new at the outlets. That being said, if you find something you really like, I say go ahead and buy it, because it may well not be there the next time. Even the few full-price stuff tends to go quickly. I practice what I preach, so I bought this Grand Floridian pillow you may recall from the last outlet report: