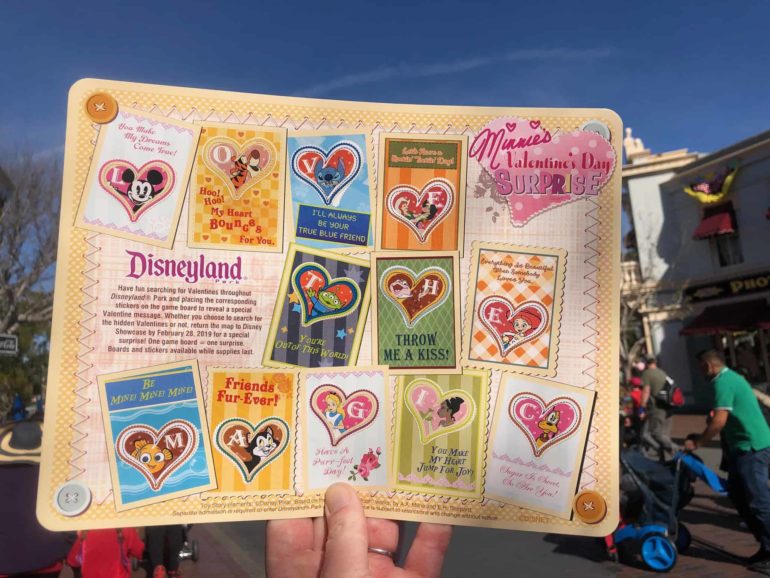 Disneyland Park is now celebrating Valentine’s Month from January 22nd through February 18th, 2019. There is adorable heart themed decor throughout the park, as well as photo-ops and special food offerings. Similar to the Easter Egg Hunt offered in 2018, there is a Minnie Valentine’s Day Surprise Scavenger Hunt available at Disneyland Park. Game boards may be purchased for $6.99 (plus tax) at Bonanza Outfitters, The Briar Patch, Disney Showcase, Disneyana, Emporium, Little Green Men Store Command, or Pieces of Eight. There is no annual passholder discount, sadly.

We got our blank game boards at the Emporium at the front of the park. It comes wrapped in plastic with a pack of stickers to attach when you find the clues.

Between the four of us Disneyland fanatics, we decided to “loosely” time ourselves. We spent a few minutes analyzing the clues and locations. If you decide to go in order of their clues, you will zigzag across the park quite a bit. We decided to attack this with a more logical plan going from Main Street, to Tomorrowland, to Fantasyland, Fantasy Faire, Frontierland, New Orleans Square, Critter Country and ending at the last clue for Candy Palace back on Main St.

In true Disney fashion they don’t want anyone leaving the “happiest place on earth” unhappy so you can literally not to do the hunt and walk across from the Emporium to redeem your prize. It even says it on the board. We started around 10:20am and roughly finished around 12:08. This included some stops for food and the restroom and not going in order. We struggled pretty hard finding two of the clues; the New Orleans Square and the Critter Country one.

Your surprise can be redeemed outside Disney Showcase. You have the option of two packs of valentine cards. Of course they don’t give you all twelve. So if you want both packs you’ll need to purchase two game boards.

The cast members suggested redeeming as soon as possible, which leads me to believe they will run out of cards before February 18th. We choose the second pack of cards.

Overall we rather enjoyed our hunt across the park. I’m happy a few of the valentine’s card were a bit challenging to find, but the Critter Country clue was nowhere near we we thought it would be. I’d say if you have limited time in the park you may want to skip this, but passholders will enjoy something new and different to do. It was fun exploring new parts of the park and interacting with cast members and different guests also on the quest.

At this point, I’ll continue into more detail where we found all the clues, so if you don’t want anything spoiled, then stop reading and feel free to come back and comment your experience after you participate.

We started on Main Street and the first clue was an easy spot in the store window.

From here we headed to Tomorrowland for the Stitch and and Pizza Planet clues. Remember to look up for a few of these.

From the old People Mover track we headed to Pizza Planet. This one took us a bit as we searched every inch of the restaurant which was closed.

Hoping that it wasn’t inside and moving up into the Space Mountain line, we backtracked to the front. Again after looking up we spotted it.

Next was the Nemo clue which we knew would be somewhere around the Nemo ride, likely having to do with the seagulls and sure enough…

At this point, we were feeling pretty good about ourselves. It was also after this one I jumbled out that the card’s hidden message would read “Love the Magic”. From Nemo we decided to head towards Fantasyland where there were several clues about Mr Toad and Alice in Wonderland.

After hunting around the carrousel a bit we spotted this above Mr. Toads ride as though you would see this from the carrousel ride.

Our next clue told us to look near the biggest smile in Fantasyland which could only mean the Cheshire Cat.

From here, due to the Sleepy Beauty Castle construction, we headed to the front of the castle to enter the Fantasy Faire.

We figured out that this would be Figaro and sure enough it was.

A quick detour through the corridor to Frontierland to attack the next two clues.

After a solid few minutes of exploring every inch around the Shottin’ Exposition, we were getting frustrated before accidentally stumbling upon the valentine above the Racho del Zocalo entrance. We felt this was a bit far away from the clue but I guess a challenge is always good. The card features Pecos Bill and Slue Foot Sue.

While putting the stickers on for this one, we turned around to find Jessie’s clue directly behind us in the storefront window, which saved us some time from looking all over the land.

Onward to New Orleans square with only three more to go.

This one took us awhile. We must have walked around New Orleans six times looking at every store front window, up in the balconies, around the restaurants and train station to no avail. Finally three of us decided to move on to Critter Country in hopes we would spot it on the way back from a different angle. One stayed back and riddled out the clue. He remembered there were some statues near the water with angles blowing a kiss. Of course the valentine wasn’t on that statue but rather on the one next to it.

Now let’s look at the one that gave us the most trouble.

Seems easy. Head to the back of Critter Country by the Tigger meet and greet. Nope. Twenty minutes later after checking every inch of Pooh Corner, the Splash Mountain exit and even going to the far end of Hungry Bear we hadn’t found it. We finally asked a cast member working the Tigger line and she assured us we were in the backwoods area of Critter Country. Now we had other groups vested as well. She finally asked one of the store workers who told us that yes the valentine was there but it was more towards the front of the land near the Briar Patch.

Bingo. Above the store front window at the Briar Patch you’ll find it. I only spotted the edges of the white envelopes because I’m short. We felt this was a bit of a stretch and some families may be frustrated. If you go in order this is the second clue and may be irritating if you think they will all be this hard. None the less we headed to Candy Palace to finish our journey.

Right in the store front we found Pluto.

We enjoyed this very much aside from the Critter Country clue which may or may not be a bit frustrating. If you don’t care about the valentine cards then take a pic of the blank board and hunt away.

Here are some close ups of the prize cards:

Please feel free to comment on your experience and check out all the Valentine’s Month offerings.