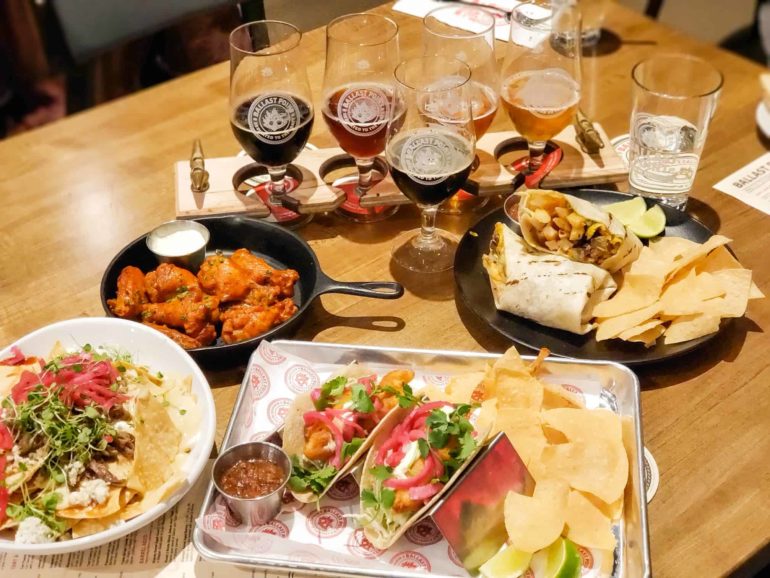 Ballast Point Brewing Company, a San Diego based brewery which was founded in 1996, has arrived in Downtown Disney. The official opening of the restaurant isn’t until Wednesday, October 16th, but they had a soft opening which I had the opportunity to attend.

Ballast Point boasts a beautiful 4,000 sq. ft. glass-enclosed bar and sit down dining area in addition to a 3,000 sq. ft. outdoor beer garden featuring cabana-style seating and a family-friendly atmosphere – perfect for guests of all ages to enjoy (they have a new children’s menu which includes crispy chicken tenders, corn tortilla quesadilla, and grilled cheese sandwiches). The main taproom offers seating for 220, along with several semi-private and private spaces, perfect for group events of any size. You can tour the space in our video:

As you walk up the staircase to the bar and seating areas, you can read along with the history of Ballast Point from their small beginnings to their current expansion and successes. They have a substantial selection of beers and a diverse menu. I selected a few items from their menu and ordered a flight of beers, so that we could sample a variety of their brews.

The flight of beers is four beer glasses filled with four ounces of the beers you choose. You can also purchase a single tasting glass for $3.75. The five beers I sampled were the Sculpan IPA, The Pineapple Sculpin IPA, Peanut Butter Victory at Sea, the Mocha Marlin Porter, and the California Amber.

I’ll start with my favorite – the Sculpan IPA. This brew had ever so slight hints of apricot, peach, mango, and lemon. It was one I wouldn’t have minded have a larger glass of to drink. It went down smooth and left a terrific taste in my mouth.

The California Amber was a clear amber with a tan head.  It was mildly sweet with a bit of a tang to it. The smell wasn’t quite as good as the Sculpan but it was a really solid brew.

For me the Peanut Butter Victory at Sea and the Mocha Marlin Porter were slightly adventurous selections. Both were stout and richly delicious. The Mocha Marlin felt like you were getting a kick from coffee while also getting robust stout beer.

The Duck Confit Nachos are an appetizer that will please the majority of people in your party even if they don’t eat duck very often. The crisp and light tortilla chips are covered with shredded duck meat, blue cheese sauce, pickled onion, arugula, and “Sour Wench” syrup. The duck was very tender and paired nicely with the savory and bitter tastes of the blue cheese sauce and the “Sour Wench” syrup. It is definitely a big portion, so it could serve as a meal if you are looking for an upscale bar snack meal with your partner or it could serve as an appetizer if you are with a bigger party.

They have three different types of wings to choose from – Spicy Sculpin Buffalo Wings, Crispy Dry Rub Wings, and Bourbon and Brown Sugar Wings. We opted to try the Spicy Sculpin Buffalo Wings at the suggestion of our server. There is something to be said for not messing wings up. They weren’t fried just right and had an excellent flavor. I definitely could picture myself sitting in the bar area outside on Super Bowl Sunday eating these wings with a flight of beers. I spoke with several servers throughout the night and one of them told me that her favorite wings are the Crispy Dry Rub Wings. In any case it seems that wing fans won’t be disappointed.

It is said that the California Burrito was invented in San Diego, so it is no surprise that a San Diego based brewery and restaurant would offer their take on the California Burrito. This burrito is a grilled tortilla filled with Santa Maria styled dry rub steak, guacamole, french fries, pico de gallo, and cheese. It comes with a side of their fresh tortilla chips and a small side of salsa. I found the burrito be a bit dryer than typical California Burrito, so I was grateful to have some salsa to sprinkle on it to give it some moisture. Overall, I would say that it was good but not great.

The Baja Style Fish Tacos were my favorite dish which I tried. They are “Cali. Kolsch” beer battered fish with cabbage, crema, pickled onion, and cilantro inside corn tortillas. They also come with chips and salsa on the side. The fish was perfectly fried and tender on the inside. I squeezed lime on the taco to add flavor. These fish tacos were fantastic and I highly recommend getting these.

All kids meals come with a choice from the following sides: french fries, apple slices, chips, avocado, or raw carrots. They also get a fountain drink, “Honest” kids fruit drink, or milk to drink. At the end of the meal they bring out animal crackers for the kids. The grilled cheese must have tasted good, because my picky eating 3 and 5 year old ate the whole thing. It was the perfect size to split between them. The other kid meal main dish options are: chicken skewers, crispy chicken tenders, cheeseburger, corn tortilla quesadilla, and crispy battered fish.

The Creme Brulee Cheesecake was a nice capstone to a great meal. It is cheesecake with caramelized pears, toasted pecans, brown butter crust, and is topped with vanilla sauce. The flavors worked well together to make this dessert feel decadent. The “Victory at Sea” S’Mores dish was a bit of a miss in my opinion. The chocolate custard has graham crumbles, toasted marshmallows, and fennel fronds on top of it.

Ballast Point will make a nice addition to the restaurant options in Downtown Disney. After it opens officially on the 16th, give it a try and let us know what you think.