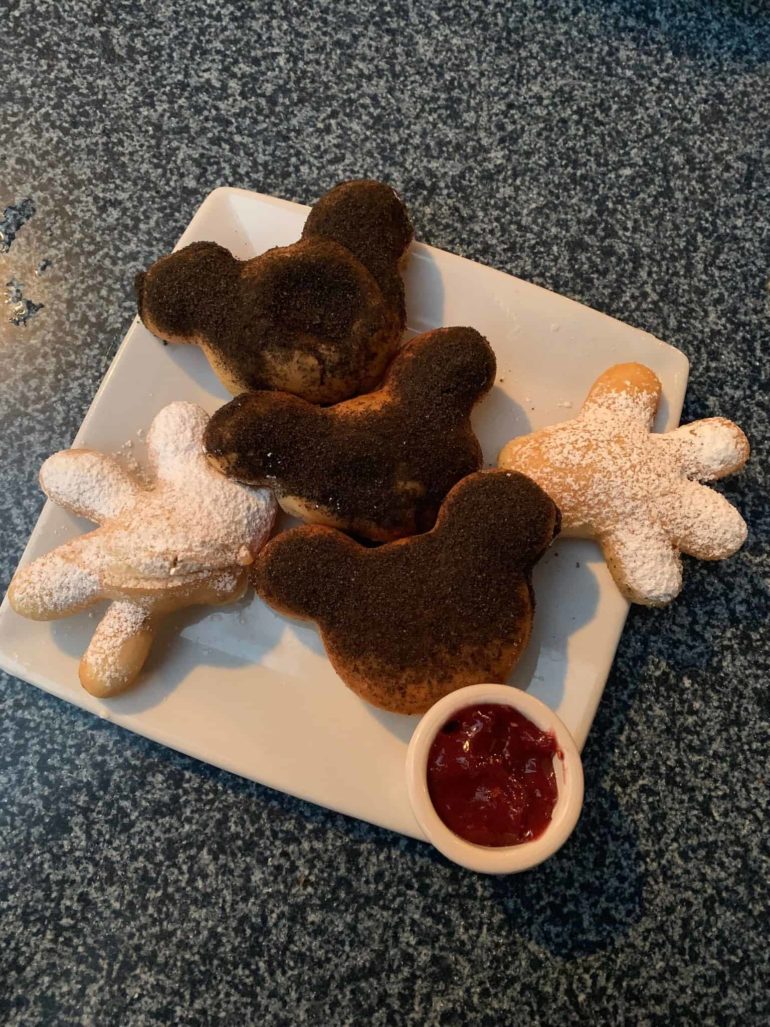 In honor of the Get Your Ears On Celebration at the Disneyland Resort, Café Orleans has two new food items on the menu for guest to try, including Birthday Cake Mickey Beignets!

What a spread! First off, this is probably a meal that I wouldn’t typically order. However, it ended up being my favorite of the foods being offered for the Get Your Ears On Celebration. The waffle fries are seasoned and fried like curly fries, which I really enjoyed. The fried chicken was a little different from what I was expecting. I thought it would be more heavily-breaded fried chicken, but it was lightly-breaded and covered buffalo sauce. This sauce was spicy, so be prepared. The Herb Bacon Coleslaw was really great and added a nice finishing touch to the sandwich.

The beignets were cooked perfectly and complimented the chicken really well. One was topped with the traditional powdered sugar and the other was topped with what tasted like cocoa powder. I actually liked the chocolate beignet the most.

It seems like a weird combo, beignets with buffalo chicken, but it works. I would order this dish again and again. It is a larger meal, so if you tend to eat smaller portions, then I recommend sharing with a friend.

Based off the name, I was expecting a lot more from these dessert beignets. I thought perhaps there would be ice cream and whipped cream topped with sprinkles. Even a little birthday hat as a nice decoration would have been nice. This dessert came out looking so simple that I thought our waiter might’ve gotten it wrong.

However, they were very warm, so I enjoyed them anyway. The raspberry dipping sauce was incredible and made every bite of beignet better than without it. The gloves were topped with powdered sugar, while the Mickeys were topped with cocoa-coffee powder. If you aren’t a fan of coffee, you might not care for this, as the taste was strong.

Overall, I would say go for the Fried Chicken and Beignets and skip out on the Birthday Cake Mickey Beignets. The beignets at Ralph Brennan’s Jazz Kitchen Express in Downtown Disney are still superior to the options in Disneyland Park.