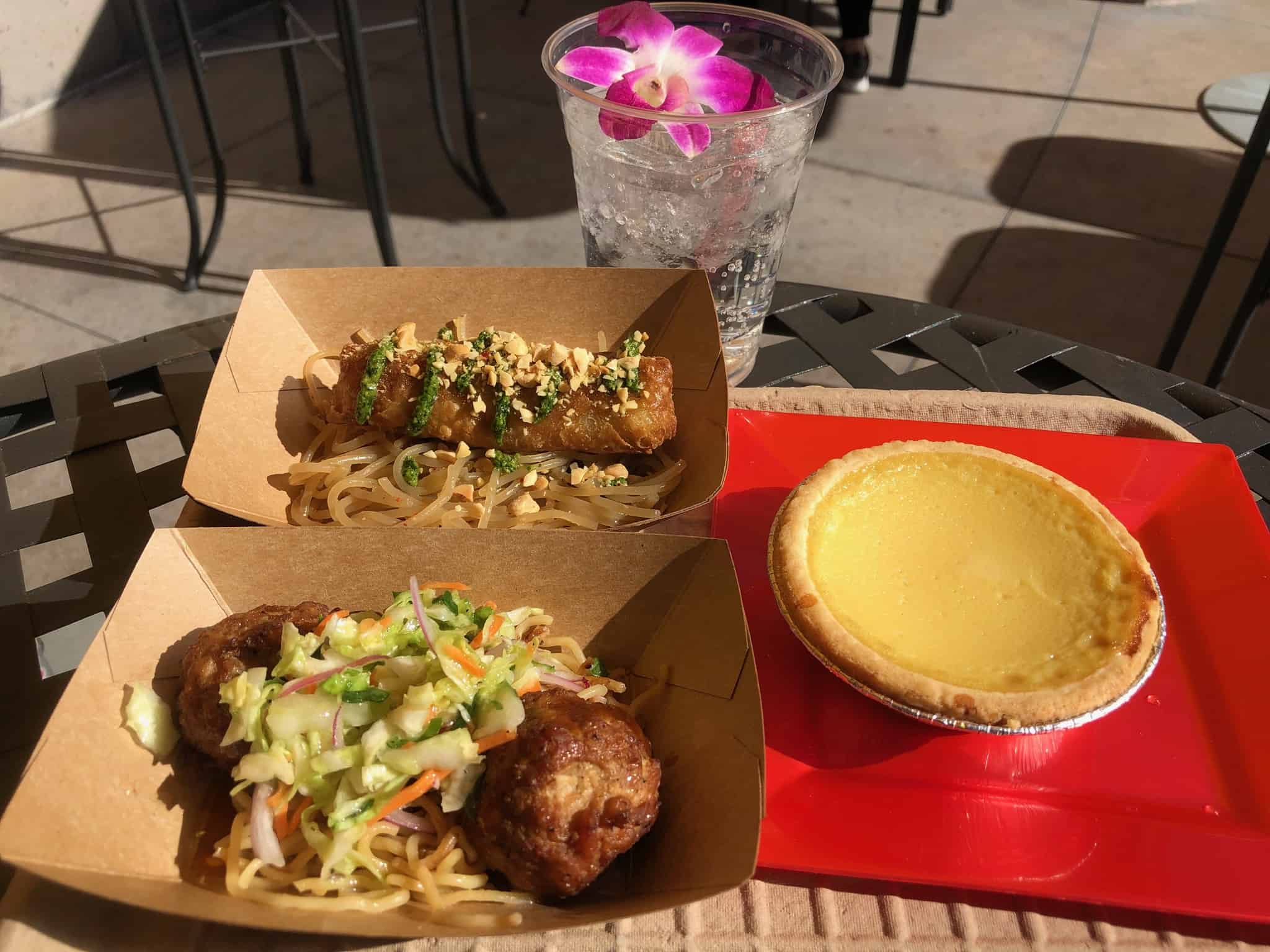 The Lunar New Year Festival 2019 is in full swing at Disney California Adventure. The celebration runs from January 25 – February 17, 2019 in the Paradise Gardens area of California Adventure. In addition to special merchandise, characters, and activities, there are some special food booths offering Asian inspired cuisine. The Longevity Noodle Co. booth has two main dishes: an egg tart dessert, a non-alcoholic orchid spritz drink, and a lager beer which they did not have at the time.

This dish has a small bed of wheat noodles, two huge chicken meatballs and a cabbage salad with apple-ginger sauce. Overall, this was one of the better savory dishes. The noodles were well-cooked and had a slight vinegar taste which was mild and good. The chicken meatballs were moist inside and had good flavor.

I’m not a big chicken fan, but did enjoy this meatball. It easily could have been dried out, but I’m glad it wasn’t. The cabbage slaw, while I normally enjoy cabbage, was the one piece that seemed like an afterthought.

The crunchy texture was needed, but the slaw was a tad too acidic. Overall, this was one of the better savory dishes offered at the Lunar Festival.

For a booth with noodles in the name and the enjoyment of the chicken meatball dish, I was hopeful for this one. Sadly, it fell flat.

The chilled noodles were overcooked and too firm. The eggroll was undercooked inside. It looks crispy, but it wasn’t.

All we could taste was a salty soy flavor. The garlic was missing.

The cilantro sauce was overpowered by salt. The peanuts were a nice addition, but I think the noodles were harder than the peanuts.

I wanted to like this, but couldn’t even tell the vegetable flavors inside as it all just melded into one mega over/undercooked mess.

As with all the booths, we have a successful dessert. This was probably my least favorite of the four booths, but it was still good.

This is exactly what is says; an egg tart. It is bigger than it looks and can easily be shared.

The crust was light and flaky. The custard was firm with a slight eggy taste with a touch of sweetness.

It stayed beautiful even after cutting in half. If I had one thought, it could’ve used a topping of some fresh fruit. Not an overpowering sauce, but just a few wedges of raspberry or strawberry to take this from an A- to an A.

The drink was beautiful. The sparkling water was refreshing and fun. The orchid syrup added just enough sweetness to make this stand out. For the price, you could probably make this at home much cheaper, but if you feel like splurging on a non-alcoholic drink, this was great. If you do not like sparkling water, you won’t like this.

They did not have this at the time of review.

Overall, we enjoyed the Longevity Noodle booth. The chicken meatballs were great and the egg tart was a simple dessert if you don’t want fruit. Check back for further coverage of all the celebrations happenings including Valentine’s Day Month and Get Your Ears On along with the Lunar New Year.