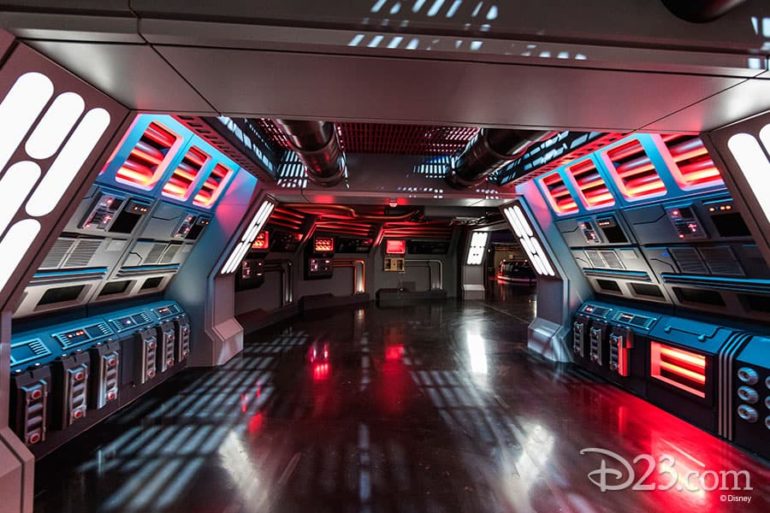 One of Star Wars: Galaxy’s Edge’s centerpieces will be Star Wars: Rise of the Resistance, and thanks to reports from D23 and Entertainment Weekly, we now have a better look than ever at the new attraction.

Entertainment Weekly‘s Anthony Breznican got an first look at the attraction, and provided a detailed description of this new immersive experience, dubbed “one of the most advanced and immersive experiences ever undertaken by Walt Disney Imagineering” according to D23.

The wait line begins beneath a mobile cannon turret, which forms an archway to a path leading to ancient alien ruins carved into the rocky cliffs of the planet Batuu.

The ground is hardened mud (actually concrete, but … go with it) where you can see the footprints of Resistance soldiers and the tracks of an R2 astromech droid.

“We got access to one of the original Kenny Baker, A New Hope 1976-1977 era droids, and we took rubbings of the bottom of the droid feet,” says Paul Bailey, a show systems engineer with Imagineering.

He then digitized those treads and turned them into three wheels on a little trolley.

“I’ll set the scene for you,” says Kirstin Makela, art director for Imagineering. “There’s a busy construction site. There are lots of people around, pouring hardscape concrete. All of a sudden, one of them just jumps on this little trolley, and someone else pulls him through the concrete.”

Even though no Star Wars fan has ever studied the bottom of that droid’s rollers, it shows the extreme effort at fidelity that the art directors pursued.

The R2 tracks continue down this curving, tree-lined path until we arrive at the caves, which are man-made — or alien-made, depending on what we think lived on Batuu centuries ago.

“The Resistance likes to set up in the ruins of ancient civilizations, like on Yavin 4,” says Imagineering creative director John Larena, referring to the temple base targeted by the Death Star in 1977’s Star Wars.

The story of Galaxy’s Edge is that the Resistance and The First Order are both visiting Black Spire Outpost in search of something (maybe December’s Episode IX will illuminate that more.)

“The idea is [the Resistance] set up only a week ago. And if they need to run, they can abandon this place fast,” Larena says.

Inside the Pueblo-like carved living spaces of the ancient Batuuans, the line of would-be Resistance volunteers passes an animated Gonk droid, which is basically a walking battery, powering the lights and communications gear.

“There’s a lot of Resistance tech in here,” Larena says, waving at the cables and communication screens hung haphazardly on the cave walls. Throughout the line, guests will pick up on transmissions that hint of an encroaching First Order legion.

But there are other things to explore, too. The line winds through a cave with a dry aqueduct and shallow dips in the flat shelves of rock.

“These were depressions used to clean and wash things,” Larena says, flashing a smile. “But now, it’s good for sitting.”

A little further along, the line weaves through an ancient worship site, although the little alcoves in the wall, lined with mineral-weeping stones, are missing the sacred objects they once held.

The Play Disney Parks app on visitors’ phones will share information with them as they go through the line, though sometimes it only raises questions without answers.

Nearby is another mysterious room, with numerous archways in the stone sealed shut with smaller, smooth rocks.

The good guys aren’t very careful with ancient archeology sites. They’ve used laser torches to carve open the ruins to create wider space for their blaster arsenal and flight equipment. Indiana Jones would not approve, but in the heat of battle, you do what you have to do.

The Play Disney app can be used to read the names on some of the X-wing suits, printed in the Star Wars language of Aurebesh.

As you enter the heart of Resistance command, a familiar droid appears: BB-8. He comes bearing a hologram of Ridley as Rey, telling visitors they have to board a transport soon for a mission led by Poe Dameron.

From there, a bay door opens and guests are hustled out past Dameron’s signature black X-wing and into the cargo bay of a transport flown by another well-known Star Wars figure — Nien Nunb, the Sullustan alien co-pilot who helped Lando Calrissian blow up the second Death Star.

An animatronic version of the character barks at his passengers from the front, his jowls flapping like a stack of pancakes. For the voice, Imagineers hired Kenyan actor Kipsang Rotich, who spoke the dialogue for the character in his native Kalenjin and Kikuyu languages in both Return of the Jedi and The Force Awakens.

Like R2-D2’s tracks, no detail was too small for authenticity.

Once the transport doors close, visitors watch on monitors as they are cleared for take-off. Before the ship rises, Isaac emerges from the control center and climbs into his X-wing, continuing to communicate with Nunb and your ship as you all lift off into space.

Before long, the convoy is intercepted by a First Order Star Destroyer. Poe can’t fight it off on his own, so he has to retreat, promising to bring back help.

A tractor beam pulls the transport into the Destroyer, and when the doors open guests are standing in a giant auditorium-sized First Order hangar, filled with scores of Stormtroopers, and hung with TIE Fighters along the walls.

The stormtroopers will be animatronic, with slight movement suggesting they are alive, but they’ll also be slightly smaller than visitors realize to create the illusion that the hangar — which is truly massive — is even bigger.

The TIE Fighter on one distant wall is significantly smaller than the humans working on it.

“Move along, Resistance scum!” That’s not normally the way Disney ride operators talk to guests, but in this case, the First Order guides have license to be rotten. They’re the bad guys.

From there, the visitors are hustled into a room similar to the one where Kylo Ren once tortured Poe Dameron. You don’t stay here long. Soon, you learn something valuable that the Resistance will need to fight the First Order, and once you get broken out of this cell the real ride continues.

Disney Parks officials won’t say exactly how long Rise of the Resistance lasts, but they say it’s not the 28 mins that has been rumored online.

Once you flee the interrogation room, you board a trackless cart that will guide you through the rest of the ride, gliding through one hangar that contains two towering AT-ATs, and eventually bringing you face-to-mask with Kylo Ren.

Exactly how he and Finn appear in the ride is still under wraps, but Imagineers confirm that both Driver and Boyega are involved in bringing the characters to life.

It’s unclear how the ride will conclude, but it’s safe to assume it ends up returning you Black Spire Outpost, most likely near the wreckage of a giant starship where scrap merchant Savi, the local secret lightsaber builder, is known to recovering materials.

What happens during the escape is unknown, but we’ll know soon enough as Star Wars: Galaxy’s Edge opens at Disneyland this June, and Disney’s Hollywood Studios this Fall.