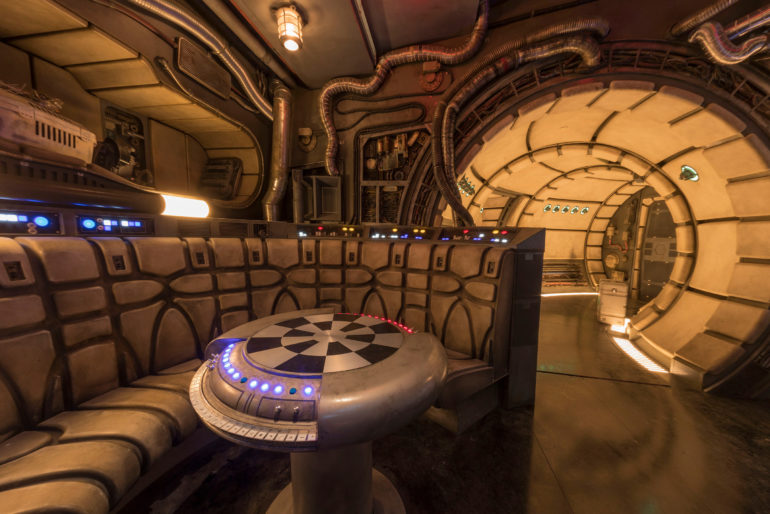 The Millennium Falcon doesn’t reveal itself right away. It waits to be found.

Disneyland and Walt Disney World visitors will already be far within the 14-acre Star Wars-themed world of Galaxy’s Edge — full of droid shops, shady cantinas, and clandestine lightsaber manufacturers — when they finally happen upon it.

Turn a corner, or climb a staircase, and suddenly — there it is. After all these years.

The lifesized starship is the centerpiece of the Millennium Falcon: Smugglers Run ride, which will finally give fans a chance to fly the fastest ship in the galaxy when the new park expansions open in Anaheim this summer and Orlando in the fall.

You approach from the same perspective that Luke Skywalker and Obi-Wan Kenobi had when they lay eyes on Han Solo and Chewbacca’s ride for the first time in 1977’s original Star Wars. You’ll be more impressed than they were, but this is still not the Falcon in peak physical condition.

It’s pocked with blaster burns and its thrusters are gasping to activate. “It’s a little worse for wear,” says Asa Kalama, the Imagineering creative director who is guiding this tour. “You’re going to hear the engines trying to turn over as they try to reactivate some of the systems.”

Occasionally, visitors will see a familiar “walking carpet” on a rooftop or crouching beneath the undercarriage to supervise the restoration. “That battle damage, it buffs right out,” says Scott Trowbridge, the Imagineering creative executive in charge of the whole land.

At this point in the Falcon’s history, Han Solo is no longer with us, but Porgs are. Chewie has partnered with the Weequay space pirate Hondo Ohnaka, a charming scoundrel from The Clone Wars and Rebels animated shows, to fund refurbishment of the Falcon while using it to run contraband throughout the galaxy.

The ship is parked facing outward with its engines flanking a curved loading dock embedded in the mountainside that frames Black Spire Outpost, the Casablanca-like crossroads where this real-world chapter of the Star Wars story is set. (Here’s where you can read more about the mythology of this community and its home-world of Batuu.)

Inside that mountain is a shipping operation where visitors will wait in line for their chance to climb into the cockpit. As with everything in Galaxy’s Edge, this becomes part of a story. You’re not tourists waiting in line for an amusement park ride; you and your fellow guests are signing up to be freelance smugglers for Ohnaka Transport Solutions.

One thing Disney Parks officials would not discuss is how they plan to manage crowds when Galaxy’s Edge opens, but they did outline how they planned to make the long wait for Smuggler’s Run more entertaining for visitors.

Like the Indiana Jones ride that opened in Disneyland in 1995, the Millennium Falcon line will zigzag through passageways and storage rooms that serve as a prologue to takeoff.

The line starts at ground level curves along the back of the Falcon, so visitors can get a closer look from that perspective. From there, you climb a set of stairs that lead to catwalks circling the mechanic shop, where other ships and engines are under repair.

Along the exterior wall, there are some narrow, triangular windows with a close-up view of the radar dish atop the Falcon. Visitors are likely to cluster around these, squeezing in for a glimpse and a photo, but…

Around the next corner, the line bends along a bank of picture windows with a long, unobstructed view of the top of the Falcon and the town of Black Spire Outpost beyond.

As you head back into the depths of the shipping center, the Disney Play app on smartphones allow visitors to scan shipping crates, revealing the true contents of what Hondo Ohnaka is trying to send around the galaxy.

Soon, you’ll enter the control room. Standing on the bridge, waiting to greet you with his sales pitch, is Hondo Ohnaka.

“Hondo is a smuggler, sorry, a ‘Shipping and Logistics Coordinator.’ A completely above-board business man,” Trowbridge joked. “He’s got cargo to move. He’s got ships to fly. Don’t ask about the cargo, don’t ask where he got the ships.”

The alien with the spiky beard and turtle-shell skin has a jolly disposition, despite a lifetime of desperation. The figure looming over you is a state-of-the-art animatronic, with dialogue delivered in his signature Russian/Caribbean accent by Winnie the Pooh voice actor Jim Cummings, who performed Hondo on the animated Star Wars shows. (He was also the in-character narrator of the Lou Anders book Pirate’s Price, which concludes with him bringing the Falcon to Black Spire Outpost.)

“What Hondo would like to present is a very above-board operation, but we come to learn it’s more nefarious than we believe,” Kalama says.

Slight spoiler — using the Disney Play app to scan shipping crates along the wait-line will reveal that he’s running blasters to help the Resistance. So he’s not all bad.

“The Resistance gets some supplies they need, and make Hondo a very, very rich Weequay,” Trowbridge says. “We’ll, of course, share in the profits with Hondo if we’re successful on our mission. We’ll split it 90/10, carry the one, minus the 10 percent. It will all work out in the end somehow.”

“The opportunity to bring a character from animation into real life was something that we’ve never done before,” says Carrie Beck, the Lucasfilm story group’s VP of animation and live-action shows. “But he’s not reliving a moment that you’ve seen in the animation. This is actually a new moment in his journey that you’ll get to experience just here in the park.”

While the Hondo animatronic assesses the roomful of would-be smugglers, his assistant — the grubby astromech droid R5-28, summons the Falcon.

In the “windows” behind Hondo, which are actually a video screen, you’ll see the Falcon rise up from its place in the courtyard and lower down into the interior docking back. (The Falcon outside never moves, of course, but this explains how you are able to board it from within the attraction.)

The final moments of waiting may be just as exciting as the ride itself. After consulting with Hondo, guests will be led down a jet bridge into a familiar location — the Falcon’s “chess room,” where C-3PO once advised: “Let the Wookiee win.”

At this point, guests have already been assigned a flight group and a number. Hondo and Chewie need two pilots, two gunners, and two flight engineers for each run.

An operator will call out the number of each group when it is time for takeoff. In the meantime, you are free to roam about the cabin.

Kalama says this was done because Imagineers knew fans would want some time to explore this part of the ship and take pictures without restriction.

Obviously, it’s all a recreation, but after the immersive experience of Galaxy’s Edge as a whole, and the role-play that comes from waiting in line, it’s easy to get carried away by the emotion and the attention to detail.

Many fans will be wandering this space like Luke in The Last Jedi, remembering all that once unfolded here. Now you get to be a part of the Falcon’s history, too.

The Smugglers Run ride has a choose-your-own-adventure quality that allows your actions to determine the outcome of the mission.

“They really are in control of the ship. It’s a completely interactive experience,” Trowbridge says. “If [gunners] don’t fire and hit that TIE Fighter, maybe you’ll get some shocks and take some damage on the ship and then you’ve got to fix it.” That’s the job of the flight engineers, seated in the back, who will have to push buttons to extinguish fires or redirect power. “And if [pilots] don’t fly right to avoid that oncoming mountain, your ship is going to smash into that wall,” Trowbridge says. “You’re truly in control of what happens on your mission.”

Will there be any hint of L3-37, Lando Calrissian’s droid co-pilot, whose consciousness joined with the Falcon when she was mortally wounded in Solo: A Star Wars Story?

“Umm, there are interesting things to discover in the cockpit,” Kalama answered cryptically.

The actual mission was not operational for EW to take a spin, but we did see concept art of the Falcon flying through a cavernous cistern, with a giant, tentacled beast lashing out from within the tubes keeping the interior lake filled. Other than that, the details of the mission are yet to be revealed.

When the flight is over and you return to Batuu, you land in the same town square, then descend into the basement of the shipping center for an exit on the outside. There you’ll see the Falcon parked right where you left it.

Your reputation as a smuggler will travel with you, however. The Disney Play app on your phone tracks your experience and transmits that information throughout Galaxy’s Edge.

Go into Oga’s Cantina for a post-flight Bespin Fizz, and the bartender might say something like, “Aren’t you part of the crew that wrecked the Falcon? Hondo’s pretty unhappy with you.”

Not happy with your story? You can always change it.

You’ll just have to get back in line and try again.