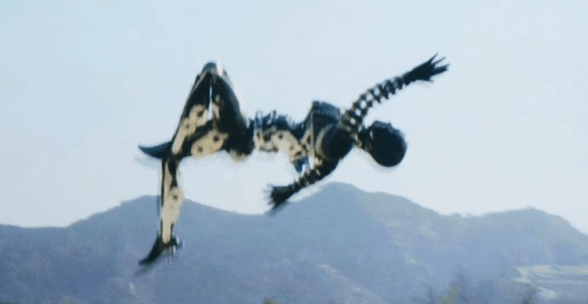 A new patent application filed by Disney has revealed a new development in their robotic stunt performer, or “Stuntronics,” program.

Recently, Disney’s research arm, Disney Research, tested out a program called “Stickman: Toward a Human Scale Acrobatic Robot.” A stick-like robot is held and then released from a pendulum, curl ups as it falls to perform a flip, and then extend again to land, mimicking an acrobat’s movements. But being able to control exactly where it lands has been a challenge, as the application explains:

To date, though, it has proven difficult to create robots that tumble through the air at high speeds and high spin rates. To date, most efforts at controlling a robot’s movements while in the air or flying have involved relatively complex robotic devices and controls. For example, some robots have been designed with a tail, and the tail is moved while the robot is in the air in an attempt to control the robot’s orientation upon landing. In another example, legged robots are controlled to move their legs during jumping and other “flight” type movements to control the pose or orientation of the robot when it lands. While useful in some applications, these robots are relatively complex and expensive to build and control and have not been wholly successful in providing accurate control of the robot’s movement or spin during flight. As a result, there remains a demand for less complex robot designs that provide control over spin or rotation during flight or falling.

This new patent application suggests that Disney has managed to turn a corner. The patent application, “Robot with Inertia Shifting Assembly Providing Spin Control During Flight,” offers also claims that Disney has developed (or is developing) an inertial shifting (or moving) assembly within the robots that will allow it to change direction while in the air. The robot will be able to calculate its height and distance to its landing point along with angular velocity while in “flight,” controlling spin so that it may “stick the landing” in a potential pre-determined pose.

This will allow Disney to use robots to perform stunts that are too dangerous for human performers. For example, if Disney wanted to create a Marvel-themed stunt show, they could augment human performances by allowing robots to perform the superhuman acts while humans play the superheroes in less dangerous circumstances. Imagine being able to see Iron Man flying through the air and and landing in an epic pose, or Spider-Man swinging his way through a Disney Park.

What will come of this new technology is yet to be seen, but it does offer a tantalizing glimpse at the next step in evolution of Disney theme parks. As technology advances, new Disney magic will be created designed to dazzle audiences and create lasting memories.