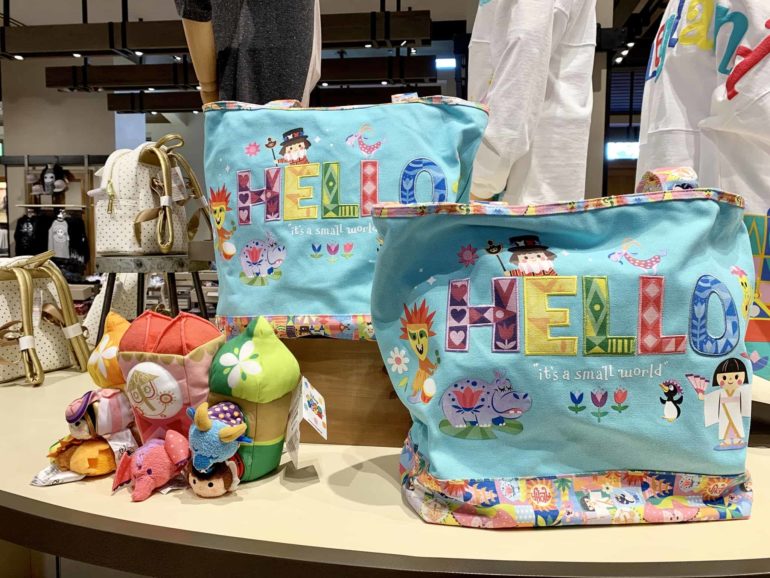 Folks, it’s time you’re aware––the happiest cruise that ever sailed has made its way into stores at the Disneyland Resort! That’s right, there’s a new collection of merchandise based on the attraction “it’s a small world.” Whether you’re a huge fan of the classic ride or prefer not to risk getting the song stuck in your head, you might find that this merchandise is exactly what you need to put a smile on your face.

Currently, World of Disney in Downtown Disney houses this massive display of “it’s a small world” merchandise. Some of these items, such as the Spirit Jersey, leggings, and backpack, have been around for a few months now. But the rest of this display is new and waiting to be taken home.

If you’re hoping to bring a piece of the magic home with you, this new “it’s a small world” door hanger is the perfect way to do so. It’s cute, double-sided, and comes in at a very affordable price. You can show off the blue “hello” side during the day and switch to the darker “goodbye” side at night.

This is a very large and well-made tote bag. It features bright colors and classic characters from the attraction, such as the hippopotamus and characters from England and Japan.

As far as phone cases go, this is one of the most affordable ones we’ve seen at the Disneyland Resort. The design features the facade of the “it’s a small world” attraction in a colorful display.

Both of these items have been available for a few months now, but we couldn’t resist shining the spotlight on them again. The Spirit Jersey pairs perfectly with the tote bag, which can hold the wallet inside.

Of course, fans of the happiest cruise can’t go home without a new ornament set to decorate their tree during the holiday season. There are five ornaments in this set: England, Japan, and Holland characters, a hippopotamus, and a “Hello” flower.

Whether you buy this for a child or yourself, this toy is a great way to bring part of the attraction home with you. The boat is has Donald Duck, Alice, Peter Pan, Aladdin, and Stitch along for the ride––all characters you can find throughout the attraction. This has been around for a bit, but it’s still cute.

This adorable layette set includes a blanket, bodysuit, shirt, and headband. Perfect for dressing up your little one and snapping photos in front of the attraction.

Tsum Tsum fans rejoice! We finally have a new Parks-themed Tsum Tsum set and it’s glorious. The five Tsum Tsums in this collection are a goat from the Swiss Alps, a little boy from England, an African elephant, a masked member of the South Pacific, and a little girl from Japan.

We can’t have a new collection without a new pair of Minnie Ears. We found these ears at World of Disney and in stores throughout Disneyland Park. These Ears appear to be a huge hit already, with the left ear saying “hello” on the front side and “goodbye” on the back side.

Over at China Closet on Main Street, U.S.A., we found this new coffee mug for sale. It features the iconic facade of the attraction, as well as “goodbye” in various languages.

If you find yourself wanting to add a little bit of the attraction to your car keys, this is the perfect souvenir for you. You can find this keychain that features four different charms over at the “it’s a small world” Toy Shop.

Last, but not least, there is a new throw blanket to keep you warm. This throw can be found in stores throughout the Resort, including World of Disney and China Closet.

You can also find many of these items available for purchase on shopDisney. So if you can’t get to Disney Parks to take these items home with you, now you can purchase from the comfort of your home.

What do you think of all the new “it’s a small world” merchandise? We happen to think it will bring a smile to faces everywhere.