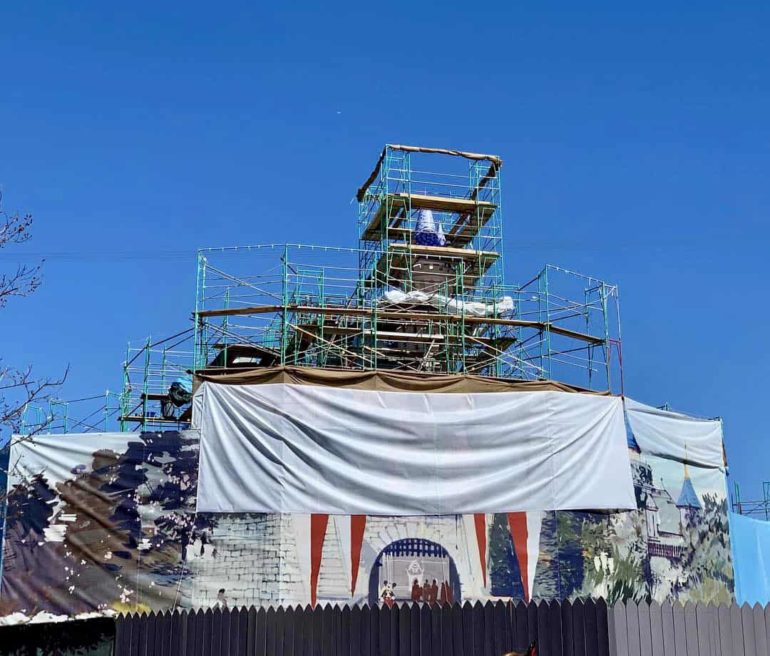 We’re midway through March, which means we’re two and a half months away from the opening of Star Wars: Galaxy’s Edge. The Disneyland Resort is in full preparation mode right now, from finishing up the new parking structure, to refurbishing existing attractions. But March also means it’s the beginning of Spring Break. More visitors combined with refurbishments makes for quite a crowded atmosphere. Here’s a look at everything going on this week at Disneyland Resort.

This week, guests can see some big changes happening at the new parking structure attached to Mickey and Friends Parking Structure. Beams have been added that will eventually form the roof that will cover the escalator loading area of the structure.

Over at World of Disney, some display changes have taken place. The area that formerly displayed the Disney Princesses merchandise and “Dream Big, Princess” sign has been replaced with women’s merchandise. The merchandise ranges from Minnie-inspired clothing to graphic tees, Minnie Ears, and accessories.

Directly across from the new women’s section is the new Disney Princesses display. Frequent World of Disney guests will notice that it’s much smaller than it was before.

We spotted a few new articles of clothing in World of Disney too. Like this Up “Adventure Is Out There” youth t-shirt for $19.99.

And check out this new D-Lish hoodie! For $44.99, you can proudly display your churro-eating skills.

If you want to see something unique and delicious, you can head over to Disney’s Grand Californian Hotel & Spa. They have a new Mickey’s 90th Birthday Celebration Cake on display in the lobby and it is gorgeous. This cake has 90 Hidden Mickeys! If you find yourself needing to escape the crowds at either Park, looking for these Hidden Mickeys is a nice way to pass the time.

Over at Disneyland Park, Project Stardust is still underway. Enhancements have been taking place in front of City Hall on Main Street, U.S.A. for a while and we have no changes to report.

Remember when we mentioned Spring Break season is here? Yeah, it’s really here. Most areas of the two parks have become crowded with families and strollers. If this is what the Resort looks like before Star Wars: Galaxy’s Edge has opened, we don’t want to see how much worse it could be.

Main Street, U.S.A. is busy, but this tends to be a familiar sight. Fantasyland, however, is overrun with families and strollers. For such a tiny area, this is where we felt the impact of Spring Break crowds the most.

Due to the high winds this last week, part of the scrim covering Sleeping Beauty Castle had to be taken down to avoid any problems. This allowed guests to get a peek at the work being done to replace the roof and give the Castle an enhanced new look.

Already we can see the parts of the roof that have been replaced with new, darker blue tiles.

There is still no opening date for Sleeping Beauty Castle, but being able to glimpse the progress being made gives us hope that it’ll return to the park soon.

Fans of Astro Orbitor will be pleased to see that the attraction is being put back together ahead of its April 5th reopening. We’re curious to see if changes have occurred to the queue behind the construction walls.

As we made our way from The Hub to the western side of the Park, we were faced with more crowds. Walking from Frontierland to New Orleans square was no easy (or quick) feat.

Pirates of the Caribbean is known for having quite a large queue on high-crowd days, and today was no different. However, it did not expand to Haunted Mansion, as it sometimes does, so we take this as a win.

After undergoing refurbishment for most of the year so far, French Market’s exterior has finally unveiled its makeover. The brickwork and upper veranda look clean and colorful now.

As we make our way to Critter Country, we are met with a crowd of guests trying to enter the FastPass queue for Haunted Mansion. The FastPass queue for this attraction is quickly becoming a problem, as the walkway in this area is not equipped to handle a large group of people and still allow room for guests to walk by. We hope this is something that gets a solution soon.

And over in Critter Country, Pooh Corner is still undergoing an exterior refurbishment. Not much has changed here, but we can’t wait to see what this storefront will look like when it’s done.

The official Captain Marvel meet and greet is here! After a temporary one opened on March 8, Hangar 12 has opened, unveiling one of the best meet and greet areas we have seen at the Disneyland Resort.

We love seeing Captain Marvel make her grand entrance and join guests waiting for a photo with her jet. For those wondering what happened to her previous meet and greet spot, it’s still up. However, it’s now being use as an additional dining spot.

And finally, Animation Academy is looking clean and fresh these days with a new window display. The previous display was showing serious signs of aging, with the windows looking so yellow, you could hardly see many of the characters. Now, the windows are back to a beautiful blue color with some new characters to admire.

We really love the addition of Miguel and Dante from Coco and Moana.

Over at Pixar Pier, a new Luxo Ball plush pillow is available for $26.99 at Knick’s Knacks. This pillow is soft and squishy, and perfect for Pixar fans.

And just outside of Knick’s Knacks, the water has returned to the bay around Pacific Wharf and the bridge leading to Pixar Pier. This is such a welcome sight after a rather dull, drained look.

As we make our way further onto Pixar Pier, we were met with this sight at Toy Story Mania. Yes, Mr. Potato Head is down for refurbishment again. It’s rather disappointing to see this toy constantly missing from the queue.

Silly Symphony Swings recently closed for refurbishment and guests are in for an alarming sight. The entire swings structure has been removed. The best view into this area is from the top of Pixar Pal-A-Round.

And next door, work is still being done to the newest Pier attraction: Inside Out Emotional Whirlwind. It doesn’t look like a whole lot has changed in the last month, but with Jessie’s Critter Carousel opening soon, we hope this ride will follow quickly.

Last, as we made our way out of Disney California Adventure, we spotted this last little surprise before heading home. In the window of Trolley Treats, Cast Members sometimes display chocolate art for guests to admire. We loved this Lilo & Stitch art on display today.