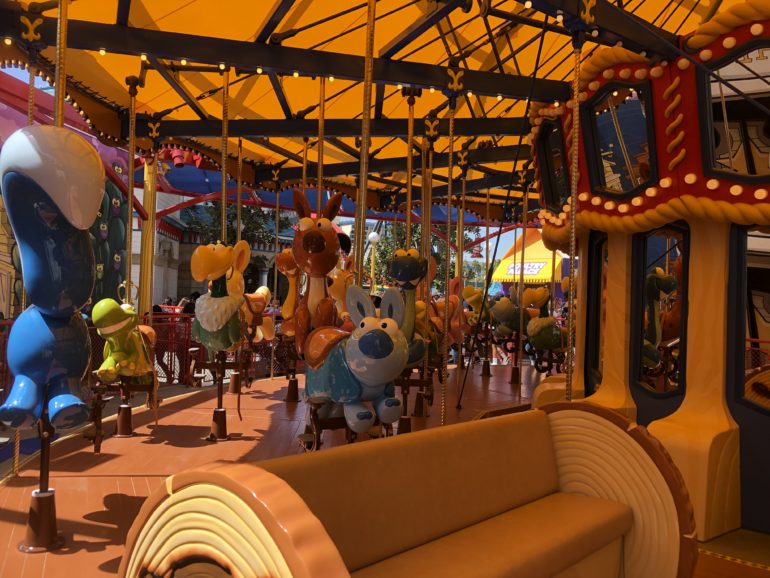 A few weeks ago, we got a special sneak peek at Jessie’s Critter Carousel with Jessie still wrapped up in some protective layers. Critter rehearsal was in full swing yesterday, and today, the attraction soft-opened for guests at Pixar Pier. We took a couple of rides on it and got to take in all the details. There are so many small details embedded into this ride, you could ride it a handful of times and still notice a new critter or two each time. That being said, we’ve broken down this in-depth look into sections for your reading and viewing pleasure, including a ride video!

First off, it’s the star of the show: Jessie the Yodeling Cowgirl!

You’ve probably seen these same photos a hundred times, but we still can’t get over how cute Jessie looks. The detailing on her clothes and hair, and even the type and ropework on the sign are amazing.

Look at the detailing on her braid! That belt! The woven fabric! They even included her pull string.

Jessie may technically be the star, but we all know what you’re really here for, and it’s these darn cute critters.

We’re particularly obsessed with both of these: a log bench that houses a large family of owls…

… and this skunk that you can ride backwards.

That’s right, this li’l scoundrel is riding tail-first. It’s details like these that make us crack up, and we really appreciate the thought that went into all this. (Let’s just hope it holds up.)

A buzzard and deer. A better look at the cotton-tail deer.

A grinning turtle and raccoon.

In this photo, you can see a snake and bunny rabbit as well.

One thing we hadn’t been able to get a proper glimpse of up until yesterday is the mural that surrounds the attraction, which features elements from an old desert town in the wild west. Check out that tumbleweed. We also really love that apathetic rooster.

A spiky cactus features a whole host of funky owls and bats.

Look, a tiny mouse hidden in the apple barrel!

Once you’re done cooing over that flying squirrel, check out the “J” on the bottom of the lantern, featuring a silhouette of Jessie’s hat and braid.

At first glance, this is just a cute bunny waving, right?

Deer, a cat, a wild dog, and even a bear make an appearance!

The queue wraps around the interior of the carousel. The posted waitin’ time was 20 minutes.

The controls for the ride are housed in a shack that looks like an old western outhouse.

Enjoy this full ride-through of Jessie’s Critter Carousel and see what it’s like to spin around on your own wild critter. The carousel features classic renditions of songs from Woody’s Roundup and other Toy Story soundtracks.

With Jessie’s Critter Carousel finally making its rounds, it looks like we’re in for a yodeling-good time!