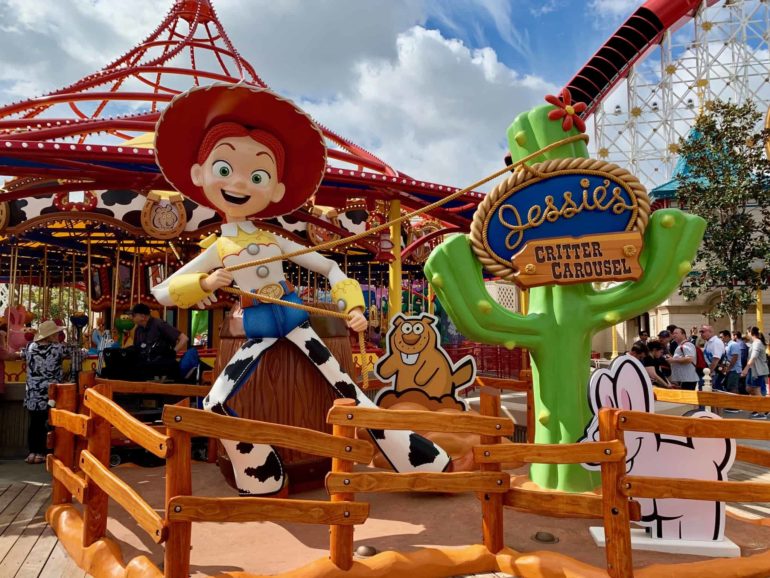 A few weeks ago, we got a special sneak peek at Jessie’s Critter Carousel with Jessie still wrapped up in some protective layers. With the opening of the ride coming up in just a few days, though, critter rehearsal is in full swing over at the carousel as the attraction went for its first semi-official spins today for the recording of promotional material.

The critters were whirlin’ and twirlin’, and there were even camera crews there to film them in action. Some guests were allowed to participate as part of the promotional material.

While we’d already caught glimpses of Jessie and the structure of the carousel before, we really love being able to get a closer look at the murals starring Jessie and all her critter friends.

Fans of Toy Story Mania next door will notice that the critters on the carousel are the same as the “prizes” guests can win at the end of Toy Story Mania. Critters include deer, jackrabbits, buzzards, raccoons, snakes, and all kinds of other varmints! For those less adventurous folk, there are log benches branded with a “J” that offer more comfortable seating.

Check out the cute, yet slightly scraggly owls, rams, and cats on the carousel facade.

There’s a wolf howling to a blue corn moon (oops, wrong movie!) and a mountain goat… with a stick of dynamite. Only the highest safety standards are upheld at this attraction.

Even Sheriff Woody makes a cameo.

Check out Jessie’s Critter Carousel in action in the video below! The carousel features classic renditions of songs from Woody’s Roundup and other Toy Story soundtracks.

Jessie’s Critter Carousel is sure to open any minute now, and it looks like we’re in for a yodeling-good time!