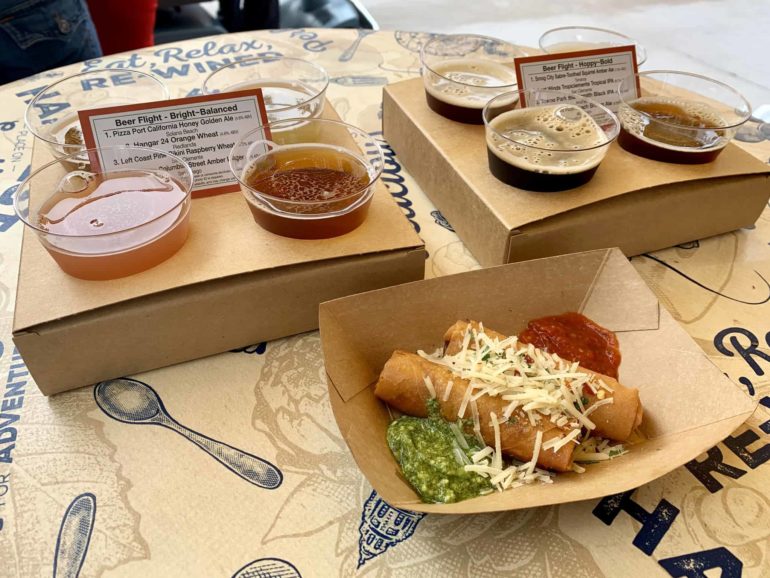 It’s that magical time of year once again when the Disney California Adventure Food & Wine Festival returns. California Craft Brews is back again but with a new list of beers for guests to enjoy. Plus! A new food item is on the menu.

The first thing we thought when we saw these rolls come out was “that’s it?” They are very small in size, which was a little disappointing for the price. However, we really liked them as a concept. They tasted a little like Totino’s Pizza Rolls, which can be good or bad depending on how you feel about Pizza Rolls. The sauce was a nice touch and paired really well with the rolls. Even though we think there should be three rolls for the price, we would still recommend giving these a try.

These beers can be purchased as a flight or separately. We opted for the full flight, so we could get a sampling of each type of beer. We’re not huge craft beer drinkers, but this flight wasn’t bad. We liked that the beers had a light, fruity taste to them. They weren’t as heavy and filling as the second beer flight.

This beer flight was much heavier and didn’t suit our taste buds at all. Again, we’re not craft beer drinkers so this flight was lost on us. We thought it tasted too “chemically,” but we think that fans of craft beer would love this. For the price of the flight and the variety of beers, we think these flights are a good deal.

And if you’re a beer connoisseur, there are two more beer options available for purchase. Both of these beers are local.