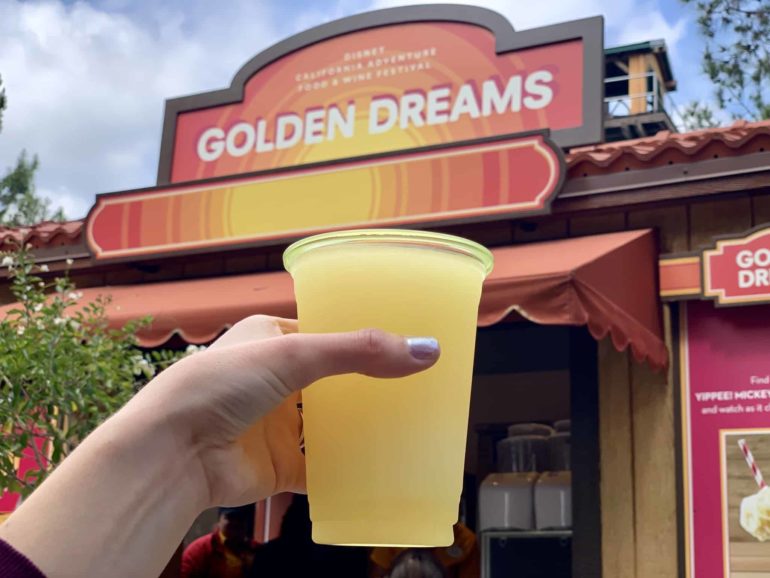 There is still a month left of Food and Wine Festival 2019 at Disney California Adventure Park, which officially ends April 23. And yet, we’re still finding new items to try. Golden Dreams is a new marketplace this year and they recently added a new cocktail to the menu: Cinnamon Whisky and Frozen Lemonade. If you’re a fan of Fireball Cinnamon Whisky, then you will get a kick out of this frozen Festival treat.

Of all the cocktails we reviewed this year, this is probably our favorite. We never would have guessed that cinnamon and lemonade would make a good mix, but somehow this was a refreshing combination. The kick of the cinnamon balanced out the sourness of the lemonade, making this frozen cocktail sweet, but not too sweet.

Compared to the Pacific Sunrise, another frozen Food & Wine cocktail, this is the winner hands down. While the liquids of the Pacific Sunrise cocktail didn’t mix with the ice and made for a disappointing slush, this lemonade was the exact opposite result. The ice and the liquid mixed well and melted pretty quickly, so it was much easier to drink.

This reviewer isn’t a huge fan of Fireball Cinnamon Whisky. And yet, this Cinnamon Whisky and Frozen Lemonade Cocktail was a delight from the first sip to the last. If you find yourself enjoying the Food and Wine Festival and want something refreshing to sip on, we insist you give this a try.