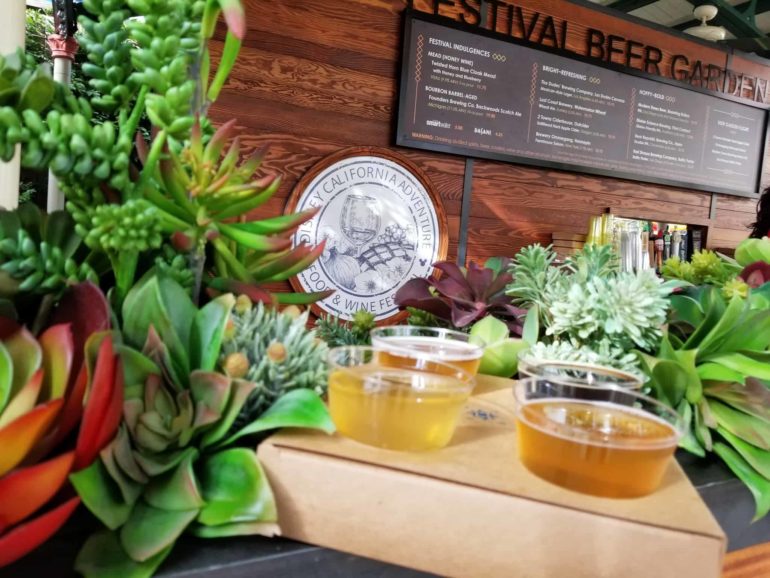 Rounding off our reviews of the Disney California Adventure 2019 Food & Wine Festival, we visit the glorious Festival Beer Garden. Appropriately occupying a quaint, out-of-the-way corner of Paradise Gardens Park, true to Disney form, this venue is to be celebrated for its creative addition to the magical environment as much as for the menu itself.

Initial disclaimer: the Festival Beer Garden only sells beer. That almost seems a distinction that does not need to be made. Though, we Disney guests have come to expect a lot from the resorts. Any outlet without a gluten-free kids menu invites a wealth of scrutiny, even a clearly-defined bar or beer dispensary. This particular venue, however, doesn’t even have the erstwhile pretzel found almost everywhere else. There’s also no Bud Light, which can practically be purchased at the main gate and restrooms. This is actually what we particularly like about the Festival Beer Garden.

We are willing to concede, this is not a typical Beer Garden. Apart from one farmhouse Saison, there is little to remind one of their lost weekend in Munich. What it does have is an exceptional selection of mostly relatively local craft brews, and just enough access to the park and surrounding charm. That every beer is not from a California brewer, specifically, is grudgingly forgivable offense, as what they have captures a vast array of selective tastes.

Light or dark, if you have a favorite craft brew, you will find something similar. If you don’t know exactly what you like, but are of an adventurous bent, try the Beer Garden Flight. The key here is an open mind. When sampling four varieties of craft beer you are likely to dislike at least two of them. The niche tastes are so extreme, if you find even half of them appealing, consider that a win.

What the flight truly does is afford guests the opportunity to sample and share a wide range of likely unfamiliar brands and beverages, without sacrificing eleven dollars on a single sixteen-ounce gamble that no one can stand. If a taster does strike you as worthwhile, then spring for the larger version. Take your newfound pleasure to the adjacent garten-style tables, or into the Gardens proper. Free live entertainment compliments fine weather and craft brew in a way that has one contemplating skipping a FastPass window or two.

Of course, such behavior is blasphemous. Have a festival beer. Go use your FastPasss. Then come back.