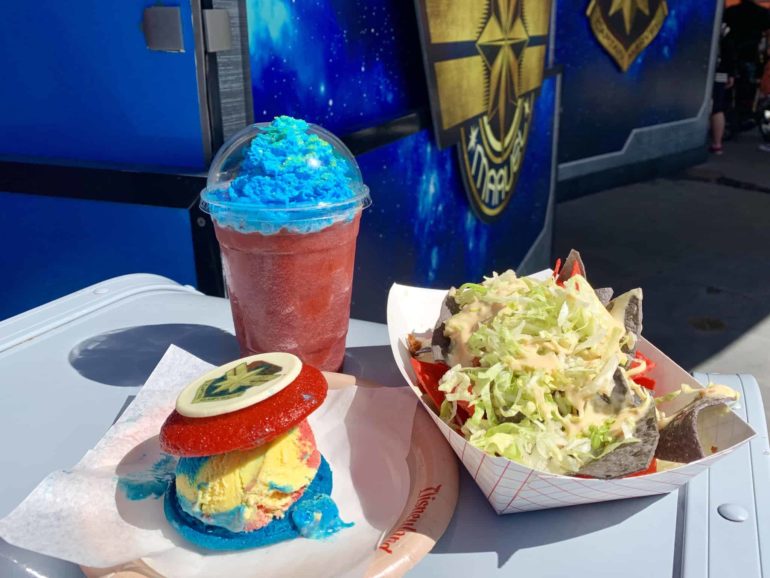 Now that Captain Marvel has landed at the Disneyland Resort and in theaters, she’s making her presence known. First came the merchandise, now comes the food. Studio Catering Co. in Hollywood Land has three new specialty items on their menu, in honor of the Air-Force-pilot-turned-superhero. So if you find yourself working up an appetite in Disney California Adventure, you might want to check out these Captain Marvel-themed food items.

These plant-based nachos are made with ground “meat,” Thousand Island dressing, lettuce, cheese sauce, pickles, onions, and sesame seeds with blue and red tortilla chips. Unfortunately, the sesame seeds were missing on our order, but we’re not sure how much of a difference they would have made.

These nachos aren’t terrible, but they are very average, at best. For vegetarian guests, these would be a decent option at Disney California Adventure. We liked the plant-based “meat,” which you really couldn’t tell wasn’t real meat, both in taste and texture. However, these nachos could have used a little more of it.

The lettuce was over the top, but we suspect it was loaded onto this dish in order to soak up the dressing and cheese sauce. There was so much sauce on these nachos that by the end, we were left with a soggy mess at the bottom of the tray. And there was such a strong taste of pickle in every bite, that we think some of the juice must have been thrown on here, too.

Overall, this dish was just okay. Again, not terrible… but not great. If you find yourself craving vegetarian nachos, then we’d say go for it.

This colorful whoopie pie is filled with red, yellow, and blue vanilla ice cream. And the piece of white chocolate on top is decorated with Captain Marvel’s logo. It’s basically your average ice cream sandwich and there’s nothing special about it, beyond looks. The whoopie pie tasted good and it was really soft, but it was extremely messy, especially the blue whoopie pie. It was gooey and stuck to the parchment paper, making it difficult to pick up. The vanilla ice cream was good too, but it’s hard to ruin ice cream. However, the blue food coloring did stain our fingers.

This ice cream sandwich is pretty for photos, but it did create quite a mess. Make sure to have lots of napkins on hand when consuming this dessert.

This slush consists of cherry lemonade with strawberry drizzle, topped with blue whipped cream and golden sparkling sugar. The best way to describe this slush is sour sugar in a cup. It was so sour, that we could not drink it and ended up tossing most of it. The blue whipped cream was incredible, though. It was light and fluffy, but it did turn our mouths blue. Perhaps the drink would taste better if the whipped cream was mixed into the slush, but that requires more work than this drink is worth. We do not recommend this unless you like drinking very sour lemonade that tastes like pure sugar.

While we didn’t love any of these items, we do love that Captain Marvel is paving her way through Hollywood Land in Disney California Adventure. The Captain Marvel nachos, ice cream sandwich, and slush are seasonal offerings with no end date available, so if you’re interested in trying them, visit soon!