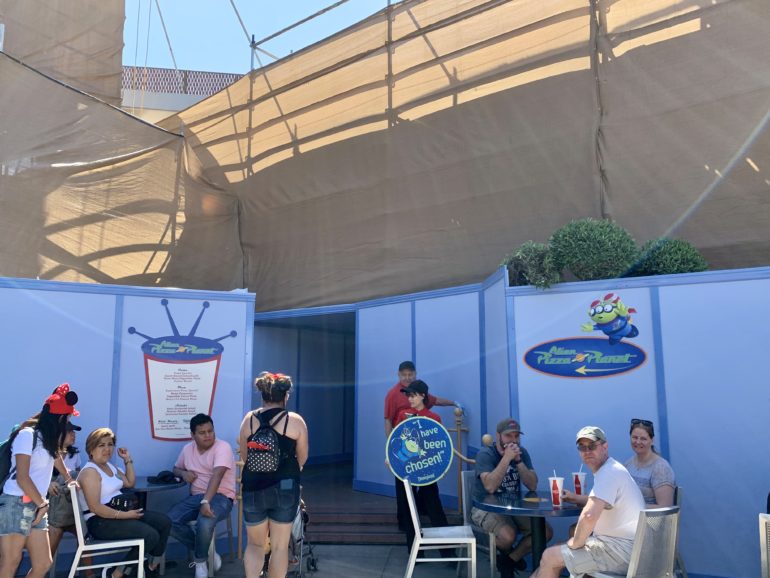 We’re in the home stretch now, as Star Wars: Galaxy’s Edge is a month away from opening at the Disneyland Resort. The addition of this new land has caused a lot of changes around the Resort, especially in Disneyland Park. Here are the latest updates on what’s happening in Disneyland now.

After the high crowds in March, April was a surprisingly slow month at the Disneyland Resort. That is, until Easter weekend. The crowds after the holiday have been much heavier again and the lines to enter Disneyland Park have been long. We saw a lot of large groups, like families and schools, entering the Park.

The Mad Hatter on Main Street is still undergoing a refurbishment to the exterior of the store, but it does remain open.

Inside, guests can view concept art for the film while they wait to view the sneak peek,

And original costumes from the film are on display, too. Aladdin and Jasmine’s costumes are stunning and very colorful.

The fan-favorite Magic Carpet is on display for guests, but it won’t taking anyone for a ride through Agrabah (as tempting as it looks).

But the most magical item on display is by far the Lamp that Genie calls home. It’s kept safely behind glass, so no one is tempted to take home this treasure.

As we make our way down Main Street, we decided to shop around in Emporium and Disney Clothiers. We spotted this new Luxo Ball Pattern T-Shirt on sale for $34.99.

But our favorite is definitely this Baloo “Papa Beart” T-Shirt also available for $24.99.

If you find yourself owning plenty of Disney t-shirts, then perhaps a new pair of leggings is right for you. These new Sleeping Beauty Leggings can come home with you for $39.99.

And Disney-inspired jewelry is always a must. We spotted this new Cinderella Alex and Ani Bangle on sale for $49.95. This double-sided bangle features animated Cinderella on one side and the quote “Have Courage and Be Kind” from the live-action film on the other.

Over near the Hub, there are still a lot of construction walls up. However, some have finally come down in front of Jolly Holiday Bakery, revealing the new Guest Relations help desk. Unfortunately, it appears the board with attraction wait times is gone and will not be returning to this spot.

The size of the Guest Relations stand has been reduced quite a bit to allow for an easier flow of traffic through this area.

Even though some of the walls have been taken down, there are still plenty up around the Hub and the entrances to Adventureland and Frontierland.

And sadly we do have bad news. The Coffee Cart Near Central Plaza has been demolished and according to Cast Members, it will not be returning. Guests looking to purchase donuts can now find them on sale at Jolly Holiday Bakery.

After an extended refurbishment, Astro Orbitor has finally reopened and it looks better than ever. The attraction was removed and replaced in its entirety, and it looks beautiful with a fresh coat of paint. Even the rockets are stunning.

Now that Astro Orbitor is open again, guests have been flocking to the attraction to ride it. The wait time was over an hour to ride it today.

Over at Little Green Men Store Command, we found two new Star Wars pin sets on sale for $24.99 each. Guests can choose to represent either the light side, the dark side, or both.

Speaking of little green men, Alien Pizza Planet is undergoing a massive exterior refurbishment at the moment. Scrim and scaffolding cover the restaurant and rocket from top to bottom.

Currently, the restaurant is still open, but it will be closed from May 13 to May 23. This is likely to finish refurbishing inside the restaurant.

There are also new walls up around Star Wars: Path of the Jedi and Space Mountain, the latter of which is still open.

Over on the other side of the Castle, the construction walls that extended from the Castle to Peter Pan’s Flight have been reduced. And some major changes have been revealed. The planters in the queue for Peter Pan’s Flight are now gone, with new brickwork and open space with a planted tree in its place. This should help clear the walkway when the queue needs to be expanded when the attraction is busier than normal.

Recently it was confirmed that Mickey and Minnie’s Runaway Railway will be debuting in Mickey’s Toontown in 2022. We reported the rumor last October. The attraction will be replacing the current Gag Factory store, so we suggest you visit the store while you can if you’re a fan.

Further into Toontown, the Mickey Mouse fountain is no longer under refurbishment. It doesn’t look like much has changed, other than the bottom of the pool of water getting a good cleaning.

As we mentioned earlier, the entrance to Frontierland is now lined with new construction walls. It appears that the pathway will finally be widened after Disney reduced the foliage last Fall.

The exterior of Bonanza Outfitters is still under refurbishment, while the inside of the store remains open. Not much has changed from what we can see, but we’re sure changes are happening behind the scrim.

The path between Frontierland and Adventureland went through a short refurbishment but it’s open once again. The walkway is has been enhanced to allow for an easier flow of traffic and we really appreciate this update.

The main walkway into Adventureland is looking a bit rough today. Construction walls block most of the walkway, making it complicated for large crowds of guests to enter Adventureland from Main Street.

However, the walls and scrim will only be temporary, as Disney enhances the walkways to be wider.

Not much as changed since the Adventureland marquee was removed a couple of weeks ago and replaced by a smaller sign. The entrance remains just as crowded as ever, so we hope that changes will be underway soon.

And lastly, The Briar Patch in Critter Country is closed to guests for the time being. If you’re looking to shop for hats and ears, The Mad Hatter Shops in Fantasyland and Main Street, U.S.A. remain open.

Those are all the updates we have from our recent trip to Disneyland Park. Be sure to follow us on Twitter and Instagram for the latest updates from the Disneyland Resort.