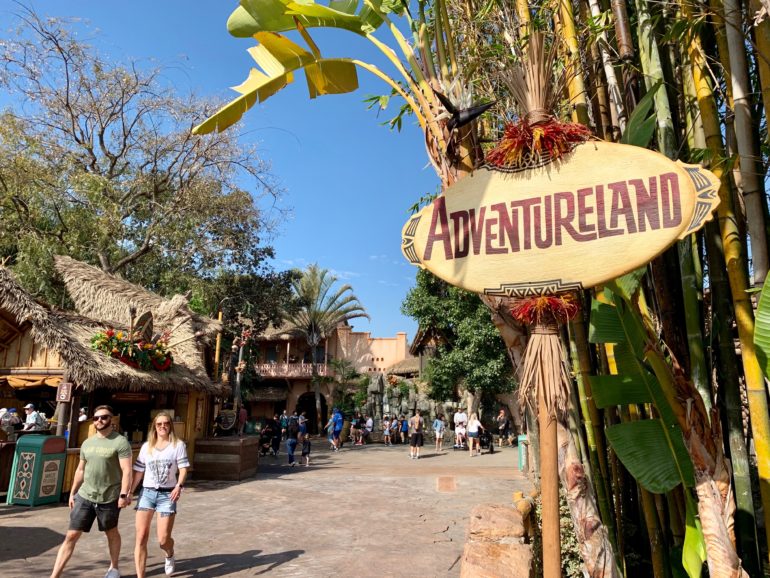 With Star Wars: Galaxy’s Edge less than a month away from opening at Disneyland Park, there are lots of projects underway to help the area take on the sheer traffic of people that’s about to be unleashed onto its lands. Just last week, a new permit was filed by Disney announcing the removal of the Adventureland sign at Disneyland Park. The permit also announced the installation of new footings and a new sign. Well, today, we got a first glimpse at the new sign and revamped entrance. Let’s check out all the changes.

First off, let’s take a look at the sign as it was before:

Yup… that’s it. If it looks familiar, that’s because it used to hang at the entrance to Tahitian Terrace, near the exit to Jungle Cruise.

It isn’t much to look at, but according to the Orange County Register, Disneyland is planning on replacing the 1990s marquee with a nearly identical sign that stretches all the way across the entry pathway.

The pathway now remains fully open, without any of the previous support beams causing any bottlenecks in guest traffic.

And now, to pay our respects. This old thatch hut structure has been completely removed, as it created a huge issue in terms of guest traffic since people used to hang out underneath in the shade. (Remember, new Disney doesn’t believe in shade.) Frequent guests of the Disneyland Resort will recall that refurbishments took place last October to reduce the foliage and water surrounding the entrance to Adventureland and Frontierland. All in the effort of creating more walking space to accommodate the influx of guests when Star Wars: Galaxy’s Edge opens.

The new sign is set to span across the entire entryway and should be ready by the time Star Wars: Galaxy’s Edge opens. We’ll keep you updated as to any changes that come to Adventureland in the coming weeks.