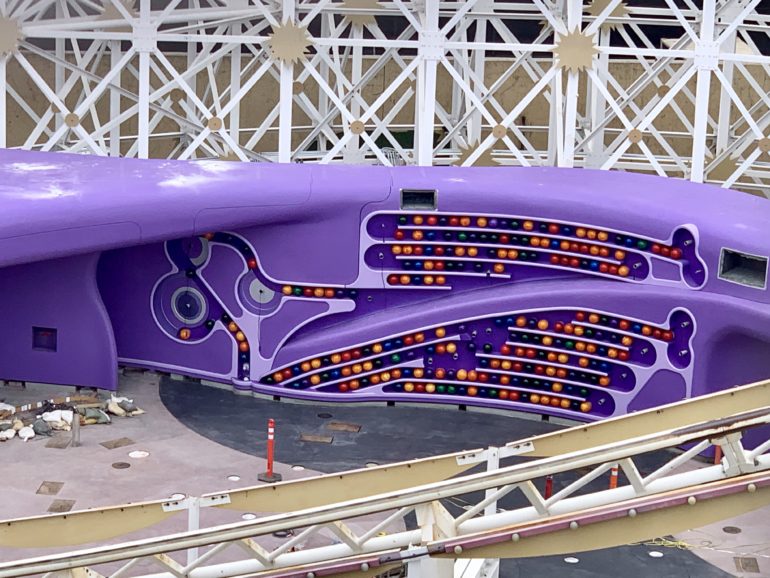 Inside Out Emotional Whirlwind Update If you’re walking by the upcoming attraction, you’ll catch a slight glimpse at the newly installed shelves and memory orbs from Headquarters from the Inside Out film. For a better look at what’s going on behind the purple construction walls, you’ll want to get to a higher vantage point.

This view from Pixar Pal-A-Round has changed drastically since our January update. Cement has been laid down across the area that will house the attraction, and foliage is slowly rolling in too. This is the exit in the photo above.

By far the biggest change is the addition of the shelves that hold the memory orbs in Headquarters. In the film, each orb represents a memory and they are colored according to the emotion of that memory; yellow for Joy, blue for Sadness, red for Anger, purple for Fear, and green for Disgust. It looks like some turning gears and such will be installed where we see gaps in the pattern. Sadly the orbs won’t move…

To the left of the shelves, we can see the foundations for tents that will make up the queue for the attraction. According to the concept art, these tents will be colored to match each of the emotions.

Based on the concept art, there is still a long way to go before this attraction is ready. However, this Inside Out Emotional Whirlwind update gives us joy instead of sadness, maybe because the memory orb wall isn’t just a decal.