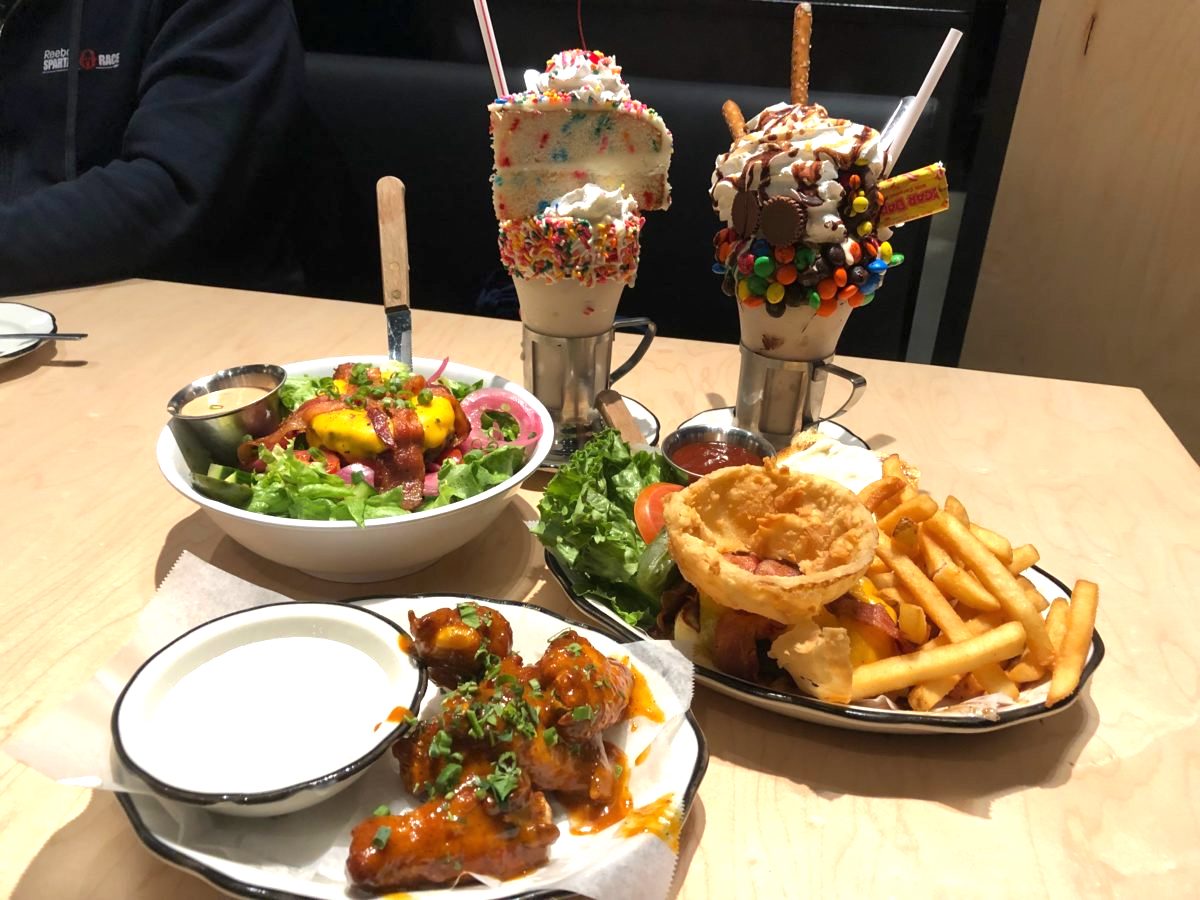 As Disneyland Resort continues to revamp the Downtown Disney area, we now have a new restaurant to enjoy; Black Tap Craft Burgers & Beer. The Anaheim location is first in California. Black Tap is now officially open to the public right underneath the Ballast Point Brewery. The line was long, but employees did a great job with crowd control and the food was worth the wait.

The outside patio area can seat up to 60 guests.

Everyone was excited to get their “CrazyShake” on.

For those in a hurry, you can order from the walk-up shake window; which is a first, and only available at this location.

The inside features street art on the walls to keep with their NYC vibe.

Even the outdoor patio has bright wall art.

The inside features a mixture of well-lit and darker areas for contrast.

You can sit at the bar and watch drinks be made.

The entire space has this kind of modern, open, industrial feel.

While the space does feel open, the tables and chairs seem oddly close together once you’re actually seated.

One of the appeals of Black Tap is their “CrazyShake”. They pride themselves on allowing guests to watch the creations be made.

There are a variety of housemade beverages including iced tea, passion fruit lemonade, strawberry lemonade and cocktails such as white sangria, red sangria and a spicy pineapple margarita.

Those who choose the walkup window also have the ability to watch their shakes be made.

While waiting, you can view the various toppings and mix-ins.

They even have Pop Tarts.

Each shake is treated as its own work of art.

Now lets get to the food. We tried the Carolina Wings, the Texan Burger, the Black Tap Burger Salad, and two of the CrazyShakes: The Cake Shake and the Sweet ‘N’ Salty. We did get 10% off our bill with our annual pass.

The food was definitely photogenic.

The shakes were messy and already dripping when the arrived, but luckily, they put that extra plate underneath which caught the majority of the drippings.

These perfectly coated beauties were delicious. Even non-wing eaters should enjoy these.

The BBQ was sweet, but not too sweet, and had a lot of flavor. So much flavor, that we didn’t even feel the epic sized bowl of ranch was needed.

The meat was tender and easy to eat off the bone. These are messy, though. One complaint would be the tiny napkins this place had. We probably used 20 plus after the meal was over.

Final thoughts on these is that $14 seems a little steep for six wings; but the flavor was good and they were overall well done. You’ll likely be here splitting the giant portions, so wing lovers should consider adding on a side of these also available in Spicy Korean BBQ, Texan BBQ and Mexican Hot Sauce.

This giant burger comes with a side of fries, however, you can substitute onion rings, sweet potato fries, or a salad for an additional $2.

The Texan comes with bacon, a crispy onion ring, Sweet Baby Ray’s BBQ sauce and mayo. I’m happy to say the bacon was crispy enough to add some texture, but did not overpower the burger. The onion ring didn’t add much in the way of flavor and sort of melted into the whole thing. Not sure I’d miss it if it wasn’t there. Overall, this was a solid burger. The temperature was perfect and the portion large enough to share.

The meat to bun ratio was great in our opinion. I don’t like bread with a side of burger, I’d rather have burger with enough bun to keep it organized.

The fries were also excellent. Super crispy and just enough salt to keep you wanting more.

We were both happy with this burger and would order again. The sauces added flavor, but didn’t overpower it. The meat was high quality and had a great texture and there was enough cheese to keep this Wisconsin girl happy. I’m sure the other burgers are just as good and flavorful.

The Black Tap Burger Salad should keep guests watching their carb intake happy, but I don’t think this is by any means “healthy”. All their burger salads come with greens tossed in olive oil and apple cider vinegar. The greens themselves were fresh and crispy. I’ve had some sad, wilted burger salads and this was not sad nor wilty. The greens held up the thick burger.

The burger itself was just as good as the Texan burger. You get a thick patty cooked to perfection covered in cheese and bacon.

There is a side of “special sauce” (Thousand Island Dressing) to pour over the top. Pretty sure we feel off the healthy train at bacon and cheese but just to make sure we added the sauce.

This was exactly what it was called, a burger salad. Was it good, yes. Was it outstanding, no. Would I pay $16 for it again… no. If you want to try the burgers here and can’t eat the bun, then go for this or one of the other salad options.

$17 for a shake? When it comes with an entire slice of cake… yes.

This monstrosity turns heads when the server brings it to your table. Make sure your social media account is up and ready to snap pics before it melts everywhere. For $17, you get this giant Crazy shake that 5 people could split. The menu description reads “vanilla frosted rim with rainbow sprinkles, topped with a funfetti cake slice, whipped cream, rainbow sprinkles, and a cherry”. There are limited quantities each day (I’m assuming when that giant funfetti cake we saw earlier runs out.)

As a huge rainbow sprinkle fan, this was amazing. The cake itself was dense, but not overly sweet. The vanilla frosting was just enough to add flavor but not so much that it become a story about frosting. I’d be happy with just that slice of cake. The Rainbow Cupcake is my favorite Sprinkles cupcake flavor and this reminded me a lot of that.

As it melted a bit, I think the shake actually got better with some of the cake and frosting mixed into the original cake.

This looks like the Titanic of cake sinking into the glass.

Overall, this was fun and delicious. It was a sugar bomb for sure, but bring friends and split the shake. This is one of the three shakes only available when you dine in. Not sure if this is a ploy to get people to eat in or if it because that slice of cake would fall off and the streets of Downtown Disney would be littered with fallen cake. Either way, I think shake fans will be happy with this and since you’re already at Disney, splurge!

As you can see, this has a lot going on. Candy on sugar on pretzels.

The description is a “chocolate and peanut butter frosted rim with chocolate gems (M&Ms) & pb cups topped with a sugar daddy, pretzel rods, chocolate covered pretzel, whipped cream, caramel and chocolate drizzle”. I think kids would be thrilled with this as there is a lot to pick at. Also candy lovers should be satisfied. As with the previous shake, this one is only available if you dine in.

The shake itself was super thick. It tasted like drinking peanut butter, not that that is a bad thing. We didn’t like this one as much as the sprinkle cake one but chocolate peanut butter lovers should be satisfied. Be warned though; it is very sweet.

The chocolate-covered pretzel covered in candy.

The pretzels and candy were fun to pick apart but the shake was super thick and I wish it had more chocolate. The flavors were good, but definitely more towards the peanut butter side.

Overall, I think Black Tap is a nice addition to Downtown Disney. The fun shakes should draw a crowd and keep both kids and adults appeased. Next time, I’d likely try a more simple shake and the walk-up window is a nice option for those with less time. The prices are high even by Disney standards, but there was no shortage of families inside. We’d recommend ordering less, sharing, and going from there.

As the weather gets nicer, the patio is a great option.

Even late at night, the walk up shake window was popular. Be sure to let us know your thoughts on Black Tap and tag us in your CrazyShake photos.