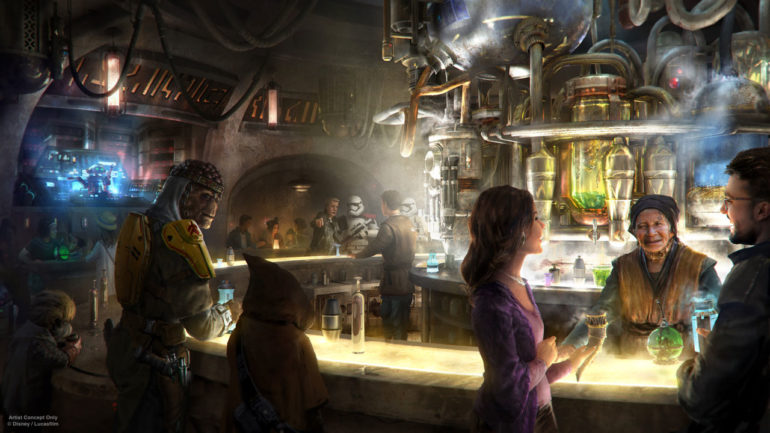 RUMOR: Oga’s Cantina Restaurant Delayed Due to Budget Cuts, Only Drinks Will Be Served (With Time Limits) Upon Open at Star Wars: Galaxy’s Edge

Even after Star Wars Celebration, there are still a lot of unanswered questions regarding Star Wars: Galaxy’s Edge, and even more surfacing as we near the opening of the land at Disneyland Park and Disney’s Hollywood Studios.

Tweets have surfaced on social media regarding the status of the Disneyland location, with budget cuts being cited as the main reason for delays in construction. Supposedly, the sit-down portion of Oga’s Cantina won’t be ready by May 31st and will open along with the Rise of the Resistance attraction in the latter phase of the land’s opening.

Drinks only! Due to budget cuts, the sit-down restaurant portion of the Cantina in #GalaxysEdge reportedly will not be ready by the May 31 opening. It will debut with the Rise of the Resistance attraction as part of the Phase 2 opening.

Another detail that seems somewhat incredulous, yet plausible in light of announced time limits within the land, is that guests at Oga’s Cantina will be placed under a one-hour time limit within the venue. Why they’ve designed such a highly-anticipated space with a maximum occupancy of 30 is beyond us. Sure, keeping the space intimate is ideal, but just imagine the 5-hour wait to have some White Wampa ale. And don’t think you can take that drink to go. (At least not at Disneyland.) All guests will be required to remain in Oga’s Cantina while enjoying alcoholic beverages, so be ready to glug down that Toniray wine before your 60 minutes are up.

Because the #GalaxysEdge Cantina is so small (max. occupancy: 30), drink buyers will be under a one-hour time limit. When your time is up, you’ll be asked to leave so another guest can experience the location

While time limits and a Phase 2 opening have been announced by Disney, none of these other statements about the land have been officially confirmed by Disney. We’ll keep you updated as they do, but in the meantime, start thinking up a strategy to maximize your time at one of the galaxy’s shadiest dives.