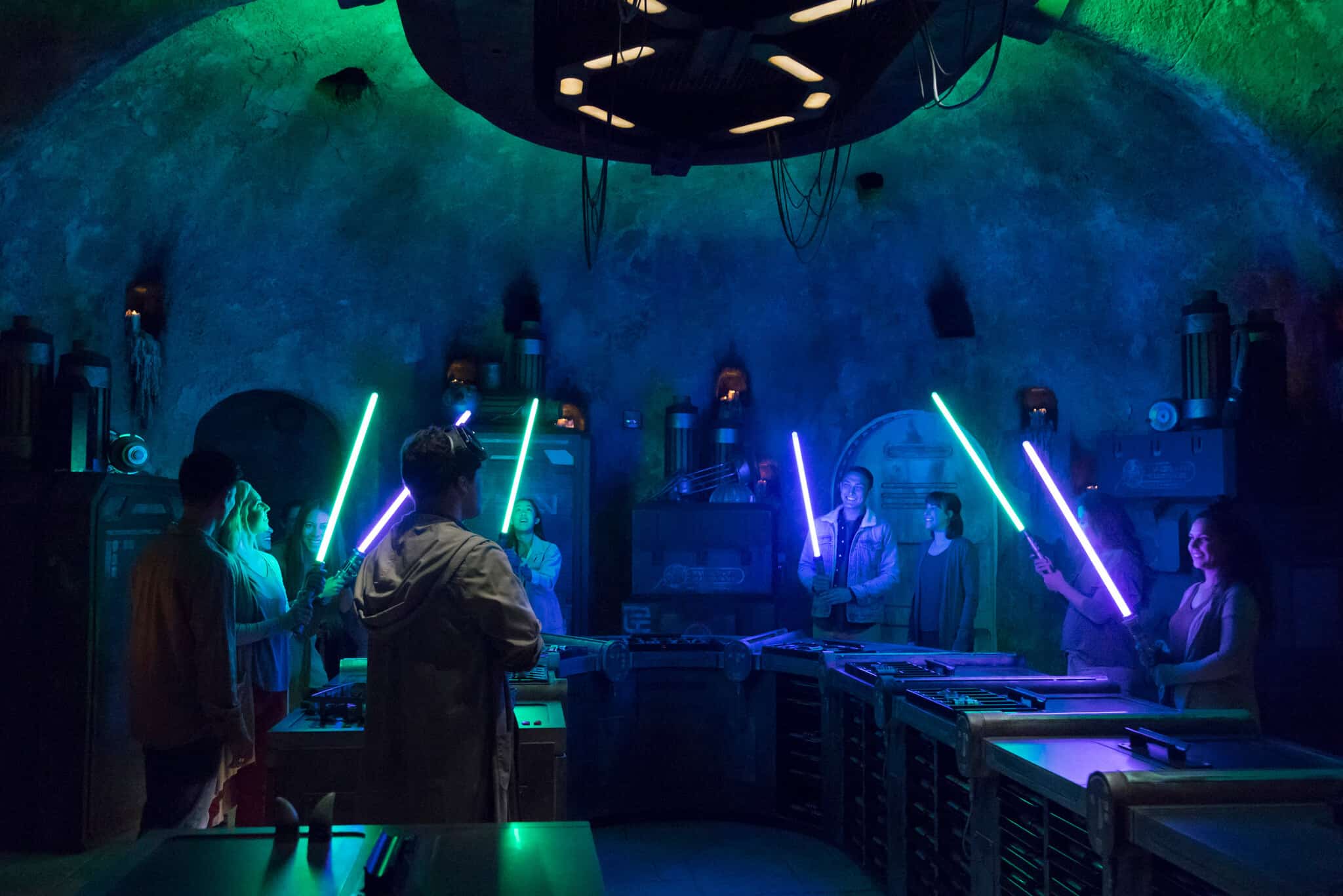 The Star Wars saga was created by American filmmaker George Lucas and produced by Lucasfilm Ltd., the California-based entertainment company he founded in 1971. When Lucas retired in 2012, The Walt Disney Company acquired Lucasfilm and Disney continues to create stories about this galaxy far, far away.

Star Wars encompasses 10 feature films (with an 11th out by the end of 2019), several television series and a plethora of novels, comic books, video games and other forms of entertainment, which now includes Star Wars: Galaxy’s Edge.

The written language of the Star Wars galaxy.

The term for “gun” in the Star Wars galaxy. These weapons come in two basic forms – pistols and rifles – with a wide variety of modifications depending on use – and user.

The Star Wars equivalent of an electronic tablet. When guests use the Play Disney Parks app** on their mobile devices while inside Star Wars: Galaxy’s Edge, the app interface transforms to resemble a Datapad.

The term for robot in the Star Wars galaxy. There are many different types, with a wide range of complexity and specialties. Some are meant to accomplish simple or mechanical tasks, some are deployed in battle, and some can converse fluently with humans.

The phrase “may the Force be with you” is peppered throughout the Star Wars saga, referring to the mystical energy field generated by all life forms. Some beings in the Star Wars galaxy dedicate their lives to it, while others don’t believe in it. The Force is not good or evil, but it can be used for either – it has a light side and a dark side. Some are able to use the Force for a kind of extrasensory perception and power, moving objects with their minds, choking people from afar and other abilities.

Following the conclusion of the Galactic Civil War in “Star Wars: Return of the Jedi,” some members of the Empire escaped into the far reaches of the galaxy, eventually resurfacing as the First Order. Ruling through force and fear, they seek to overthrow the New Republic.

Spacecraft equipped with a hyperdrive can travel at lightspeed (faster than the speed of light) and access an alternate dimension known as “hyperspace.” This allows ships to travel hyperspace lanes and traverse great distances across the galaxy in a much shorter time than using sublight engines. The phrase “make the jump to lightspeed” is commonly used in the Star Wars galaxy when referring to accessing hyperspace. Stars stretch into lines of light when jumping to lightspeed, and hyperspace is identifiable by its mottled, pulsating waves of light.

A noble group of protectors unified by their ability to tap into the power of the Force. The Jedi were the guardians of peace and justice in the galaxy, until they were eradicated by Darth Vader and Emperor Palpatine during the Galactic Civil War.

The weapon of a Jedi, it can be used to cut through blast doors or enemies alike. Using the Force, a Jedi can predict and deflect incoming blaster bolts. At its heart is a kyber crystal that focuses energy into a blade; the crystal is attuned to the Force and connected to a Jedi on a deeply personal level.

After the Rebel Alliance defeated the Empire at the Battle of Endor in “Star Wars: Return of the Jedi,” the New Republic was formed to help govern the galaxy. Promoting peace and disarmament, the New Republic oversaw 30 years of tranquility but was divided in its response to the rise of the First Order.

A remote, often lawless region of the galaxy on the edge of Wild Space, far from the more developed and populated Core Worlds.

A small, secretive, private military force founded by rebel hero Leia Organa to monitor the actions of the First Order. The cash-strapped movement relies on credits, ships and equipment quietly funneled from the few New Republic senators who share her concerns.

These elite shock troops are fanatically loyal to the First Order. They wear imposing white armor, which offers a range of survival equipment and temperature controls to allow the soldiers to survive in almost any environment. They wield blaster rifles with great skill and attack in hordes to overwhelm their enemies.

PHOTOS: A Guide to Iconic Ships and Other Vehicles Scattered Throughout Star Wars: Galaxy’s Edge