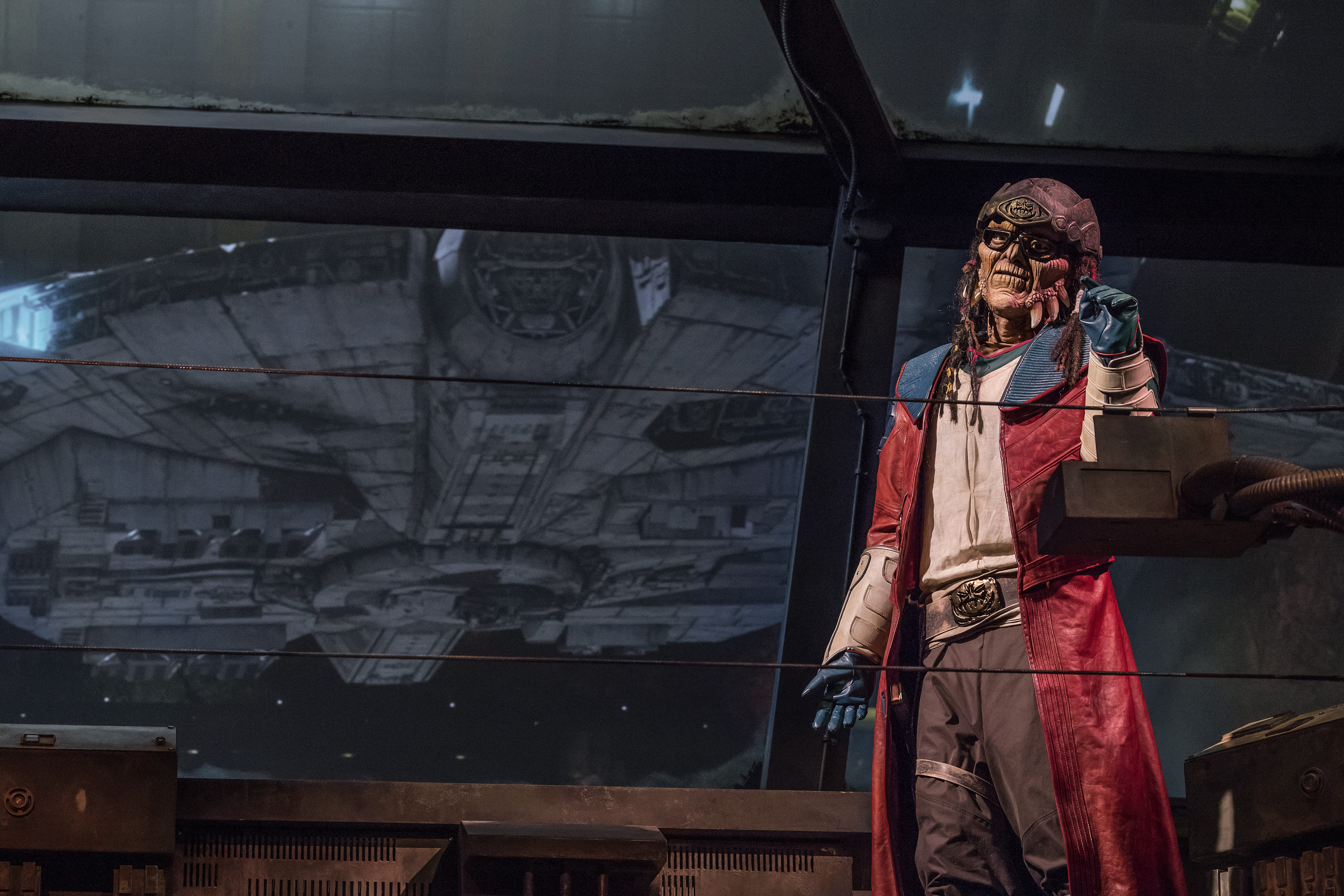 Star Wars is filled with memorable personalities that populate a dynamic galaxy. This new land is filled with space pirates to mystical proprietors, plus chatty droids and cuddly aliens. Some of those characters join the action at Star Wars: Galaxy’s Edge. Those who visit the lands may discover the presence of creatures and droids who call the planet Batuu home – some in merchant stalls, some in attractions and some as Audio-Animatronics figures. A few characters will meet with guests as they roam the lands.

A legendary Wookiee warrior and Han Solo’s co-pilot aboard the Millennium Falcon, Chewbacca (“Chewie,” for short) came to Batuu aboard the damaged Falcon. He needs special parts to fix his ship and the Resistance needs fresh supplies, so Chewie made a deal to loan Hondo Ohnaka the Millennium Falcon for a few smuggling runs in exchange for the items he desperately needs.

A larger-than-life collector of all things odd and hard to find, Dok-Ondar buys, sells and trades valuable items in his intergalactic antiquities shop. The Ithorian is a proud curator, amassing a collection unrivaled in the galaxy. He is also known as the “gatekeeper” of the black market in Black Spire Outpost, so locals know not to cross him. Guests can see him working at his desk, taking inventory and barking the occasional order at his assistants between incoming calls.

This Blutopian crime boss of Black Spire Outpost is a mysterious figure. She is never seen, but is often heard yelling at her servers inside Oga’s Cantina. Her influence stretches throughout the outpost, as her fingers are in every business transaction and she knows everyone coming and going.

As believers in the ways of the Force, the Gatherers are a group of men and women dedicated to restoring balance in the galaxy by passing on ancient knowledge. Part of their mission is guiding the next generation of Jedi-hopefuls in building their own unique lightsabers.

Vi Moradi is a spy and intelligence officer for the Resistance who traveled to Batuu to scout the planet for its viability as a potential Resistance recruiting station. This strong-willed, hot-tempered, quick-witted woman is trying to stay one step ahead of the First Order while recruiting for the Resistance as she traverses the twisting pathways of Black Spire Outpost.

Established in the “Star Wars: The Clone Wars” animated television series, Hondo Ohnaka is a Weequay pirate turned “legitimate” businessman (although most would call him a smuggler). A rough-around-the-edges rogue, he is always looking out for the next big score. Hondo founded Ohnaka Transport Solutions, which operates out of Black Spire Outpost and specializes in acquiring or delivering restricted items. In Millennium Falcon: Smugglers Run, he asks guests to help him acquire some prized cargo of importance to both the First Order and the Resistance.  And, of course, Hondo will be pocketing a sizeable profit along the way.

The Supreme Leader of the First Order strikes fear in the hearts of his foes with his imposing mask, long dark robes, iconic hilted red lightsaber and notoriously violent temper. As a highly trained, Force-sensitive warrior, Kylo Ren is determined to root out the Resistance and travels to Batuu to search for and destroy any traces he can find.

Sometime after the Battle of Crait at the conclusion of “Star Wars: The Last Jedi,” Resistance hero Rey made her way to Batuu. Here, she leads the recruitment effort for the Resistance by actively inspiring supporters of the Resistance along the galaxy’s Outer Rim.

Zabaka is a Toydarian, the flying alien species first seen in “Star Wars: The Phantom Menace.” Her small stall has thrived in Black Spire Outpost by selling quality toys and through her good relationships with other proprietors in town. Guests can see the silhouette of Zabaka going about her daily business through her workshop window.

A popular pet throughout the galaxy, this gold and brown plumed bird was first seen in the “Star Wars: The Clone Wars” animated television series.

This slimy, tentacled carnivore was first seen in “Star Wars: A New Hope” when it attacked Luke Skywalker in the Death Star trash compactor. When guests stop for a drink at the water fountain in the Black Spire Outpost marketplace, they may see the eye of a dianoga (nicknamed “Tiny”) pop out of the water tank above. Dok-Ondar has a juvenile dianoga in a tank at his shop – nicknamed “Toothy.”

This small, timid creature with a protective shell and two eyestalks was seen in the “Star Wars Rebels” animated television series.

These glowing creatures are native to the colorful, humid jungle planet Felucia, first seen in “Star Wars: Revenge of the Sith.”

A fierce predator typically the size of a small humanoid, this creature can only survive under the cover of darkness. It lives in a dark crate in the stall, and was seen in the “Star Wars Rebels” animated television series.

A sprightly feline that hunts small rodents on the grassy plains of Lothal, this lively animal is known primarily from the “Star Wars Rebels” animated television series. In the stall, guests can see a Loth-cat’s tail sway gently as it sleeps.

This reptilian creature is a favorite pet for denizens of the galaxy’s underworld, most famously Jabba the Hutt. Guests visiting the stall can see the monkey-lizard’s tail hanging from a cage and occasionally hear its iconic high-pitched laugh, likely recognizing it from “Star Wars: Return of the Jedi.”

Also known as a Trandoshan monkey, this species of primate lives in trees and was seen in the “Star Wars: The Clone Wars” animated television series. Guests can see its tail as it hangs from a cage in the stall.

These “beastly things” are bat-like parasites that chew on the power cables and energy conductors of starships, as seen in “Star Wars: The Empire Strikes Back.” In Star Wars: Galaxy’s Edge, guests may spy a mynock that’s pickled in one of Oga’s cantina tanks.

A short, gentle rodent found in the Gungan Swamps of Naboo (sometimes mistaken for a plant).

This large rodent forms complex underground burrowing systems called “towns.” It has horns, a snout, sharp incisors and powerful claws used for defense and digging. Guests can see a taxidermic profrogg in Dok-Ondar’s Den of Antiquities.

A mammalian species capable of sniffing valuable minerals makes puffer pigs vital to smugglers, as seen in the “Star Wars Rebels” animated series. When frightened, it inflates to massive proportions. Guests will see its eyes and hear its grunts and snorts inside the Creature Stall.

This dangerous carnivore can grow to 100 meters long and likes to bury itself in sand – leaving only its massive mouth exposed to the surface, as seen in “Star Wars: Return of the Jedi.” Dok-Ondar keeps his infant sarlacc in a special tank that simulates arid atmospheric conditions.

Native to the bogs of Dagobah, this creature has thousands of teeth capable of grinding up plants and animals – but not necessarily droids, as R2-D2 fortunately discovered in “Star Wars: The Empire Strikes Back.” Those keeping a close eye will find a swamp slug in one of the cantina’s tanks.

This large, white, furry, carnivorous predator hails from the ice planet Hoth. It often sneaks up on prey prior to attack, as experienced by Luke Skywalker in “Star Wars: The Empire Strikes Back.” Dok-Ondar has a taxidermic wampa in his collection.

This pest is native to Tatooine, and as Luke Skywalker noted in “Star Wars: A New Hope,” it isn’t much bigger than two meters. Guests can see a taxidermic womp rat in Dok-Ondar’s Den of Antiquities.

A carnivorous amphibian typically found in the sand dunes of Tatooine, it famously made a brief cameo outside Jabba the Hutt’s palace in “Star Wars: Return of the Jedi.” It waits for unsuspecting rodents or insects to pass by, then whips its long tongue out to snatch prey. At
Star Wars: Galaxy’s Edge, guests can observe a worrt alive in one of the cantina’s tanks.

As a former smelter droid, 8D-J8 was reprogrammed to do one thing: turn the meats on the spit at Ronto Roasters, ensuring they are cooked to perfection.

This former Star Tours pilot droid, known as “Rex,” crash landed on Batuu and was reprogrammed into a DJ by Mubo at the Droid Depot. Mubo gave Rex to Oga Garra to pay off a debt, and “DJ Rex” now provides the musical entertainment inside Oga’s Cantina – and he’s still as chatty as ever.

This sassy droid is Hondo’s most capable astromech and serves as an automated repair mechanic on the smuggler’s many starships. He calls Hondo out on many occasions, always keeping the pirate on his toes.