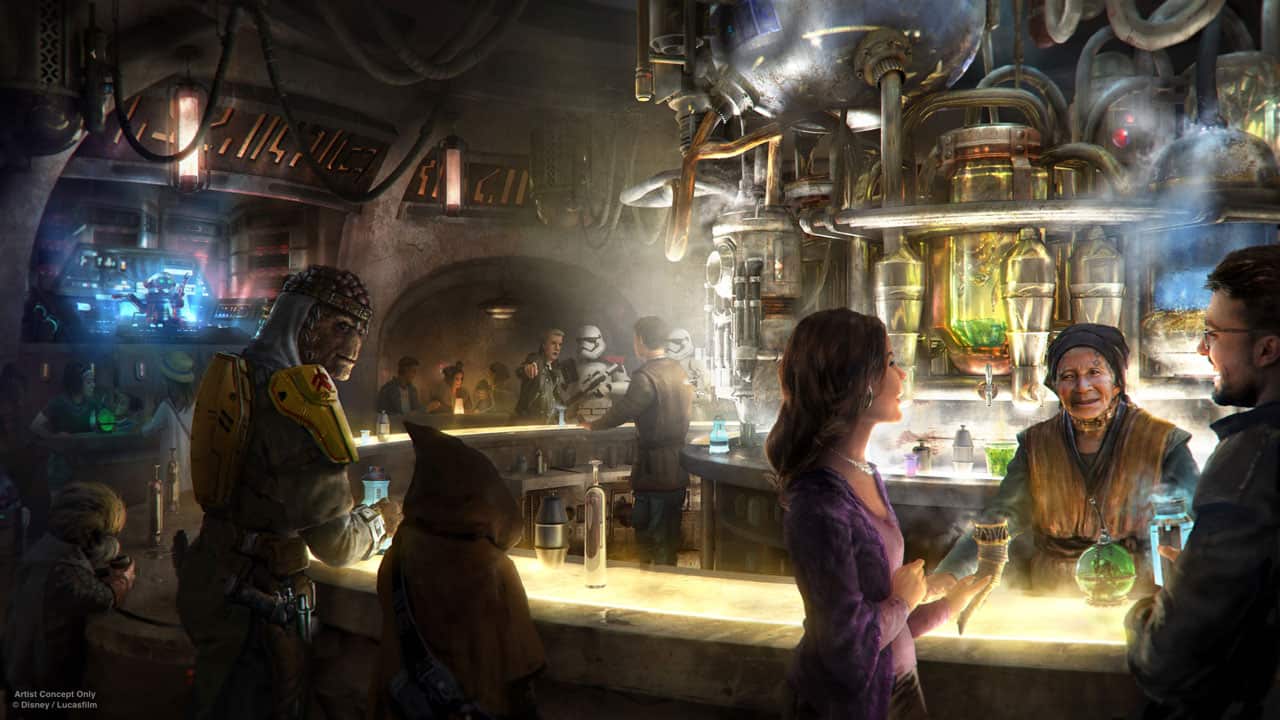 The opening of Star Wars Galaxy’s Edge is almost here at Disneyland Resort, and more news continues to come out. Today, we learned that Oga’s Cantina in Galaxy’s Edge will feature beverages by big-name craft brewers and cider-makers, as well as a small-name Sonoma wineries. They will make the beer, wine and cider that comes to this special eatery. Some of the familiar names include Boston Beer, Sierra Nevada, New Belgium, and Ballast Point.

Thanks to the OC Register, we have all the details of what’s to come, as well as the Star Wars references in the name of the drink:

We previously told you about some of the souvenir mugs, the printed menu, and coasters that you’ll be able to find inside of Oga’s Cantina, and all of the drinks on this menu feature some kind of Star Wars reference.

You’ll even be able to order all four beers in a special Rancor Tooth beer flight board that can be yours for $75.00.

The Orange County Register details out some more information about the breweries and cidermakes with featured beverages at Oga’s Cantina:

Goldschmidt Vineyards will make the Toniray and Imperial Guard wines served in Galaxy’s Edge. The teal-colored Toniray will have citrus and orchard fruit flavors. The Imperial Guard red wine will be a robust Cabernet Sauvignon. According to Star Wars lore, Toniray is a teal-colored bubbly wine served chilled in a slim flute. Toniray was produced on the planet of Alderaan, which was destroyed by the Death Star in the original 1977 film. Clad in red robes and masked helmets, the elite Imperial Guard unit serves as bodyguards to the Galactic Emperor.

Angry Orchard is owned by Boston Beer Company, makers of Samuel Adams Boston Lager. Boston Beer is the second largest craft brewer in the U.S. based on beer sales by volume, according to the Brewers Association.

Sierra Nevada and New Belgium fall right behind Boston Beer among big craft brewers, at numbers 3 and 4 respectively on the Brewers Association list.

Blue Point may be less familiar to West Coast beer drinkers. The foul-mouthed New Yorkers (the brewery’s website is littered with profanity) partnered with Anheuser-Busch’s craft brands unit in 2014.

Disney chose brewers with national reach so the Galaxy’s Edge beers could be identical at both in California and Florida.

We’ll be at the opening of Galaxy’s Edge bringing you all the photo reports, video, reviews and tons more to connect you to the parks.

What drink are you looking forward to trying out at Oga’s Cantina? Drop your favorites in the comments and stay updated here on WDWNT, your worldwide leader in Disney Parks news.

BLACK SPIRE 101: Everything You Need to Know About Docking Bay 7 Food and Cargo in Star Wars: Galaxy’s Edge