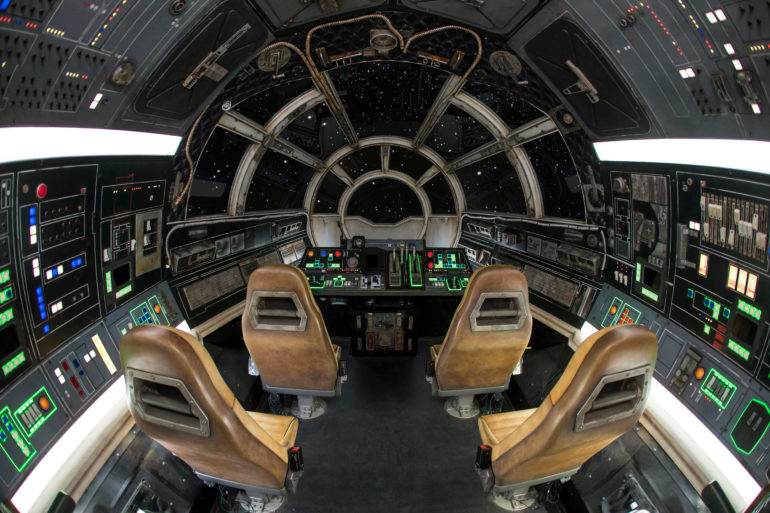 Inside Millennium Falcon: Smugglers Run at Star Wars: GalaxyÕs Edge at Disneyland Park in Anaheim, California, and at Disney's Hollywood Studios in Lake Buena Vista, Florida, guests will take the controls in one of three unique and critical roles aboard the fastest ship in the galaxy. (Joshua Sudock/Disney Parks)

Editor’s Note: Welcome to Black Spire 101! There’s a universe of information out there on Star Wars: Galaxy’s Edge, so we’re making an effort to compile each shop, eatery, and experience into all-encompassing, consistently-updated pages filled with one-stop information. We will be updating them with all the latest information and photos from inside Black Spire Outpost. This will prove to be essential on your next intergalactic voyage to Batuu, regardless of what coast you’re on. Check out the full coverage at starwars.wdwnt.com, and make sure you pull on those yellow straps!

Everything You Need to Know: Millennium Falcon: Smugglers Run

We shant insult true Star Wars fans with a lengthy rehash of the Millennium Falcon’s backstory. Galactic fanatics also do not have to be told that the ship that made the Kessel Run in under 12 parsecs is the centerpiece of Star Wars: Galaxy’s Edge.

What we will tell you is that the current crop of Imagineers have perfectly recreated everyone’s favorite hunk of junk for the brand new land. Seeing––much less boarding and piloting this now living bit of history ought to bring tears of appreciation to even modest fans.

Naturally, there will be those with the sort of iniquitous insight who recognize that the ship’s main hatch is too narrow, or that the compressor housing is two inches too high on the cockpit console. Such people are hard to impress, and one can hope there aren’t too many of them in your flight crew. For the rest of us, Millennium Falcon: Smuggler’s Run represents the crown jewel of this striking new land. At least in the part that is opening. You can read our full review of Millennium Falcon: Smugglers Run here!

The beating heart of Black Spire Outpost, Millennium Falcon: Smugglers Run lies at the center of, well, of that which is going to be initially open and worth pursuing. Surrounded by the primary food, booze, and swag outlets, guests really ought to head straight for the Falcon. Given the monumentally anticipated crowd levels, even despite the novel reservation system, those not committed to the ride aren’t going to get on it.

Yes, there is an entire brand-new land at which to marvel and secure post-worthy pics. One can certainly be excused for being distracted by the exquisitely-detailed otherworldly outpost. You may want to explore on your own time, however. Most everyone else is going to bee line for Smugglers Run. When they get there ahead of you, their presence, and that the queue appears to be a bit of a plodder, may be prohibitive.

What: An Interactive Galactic Spectacular

Black Spire Outpost is of the Cars Land and Pandora brand of amazing Disney creativity. What they have reproduced in the Millennium Falcon is truly unbelievable. A significant portion of the world’s population is going to descend upon Batuu for much of the foreseeable future. Frustration may accompany your specific visit, and the wait you will likely endure to participate in the Millennium Falcon: Smugglers Run attraction will have you questioning its very worth. Well, do it anyway. Your wait would be worthwhile if the Falcon was a simple walk-through museum-type exhibit. That it is actually a wholly interactive Star-Tours-style thrill ride may have you willingly getting back into the unwelcoming line.

Guests encounter several layers of pre-show and a ton of mind-twisting Star Wars authenticity before they get anywhere near the ride itself. The slog through the queue will be mitigated by a faithful spaceport representation and stunning views of the outside of what one might swear is the Falcon itself. A few turns, hallways, and character sightings also serve as helpful distractions. Then, ultimately, your patience, should you retain any, is rewarded as you find yourself on, near as you can tell, the unmistakable bridge of the honest-to-Han Millennium Falcon.

Signature lighting, exposed wiring, passageway curvature, and, of course, the holographic chessboard all stand before you, boldly punctuating the sentimental journey. And, again, you haven’t even sat down yet. Here guests are introduced to their expected role on the ride/ship. A heap of the novel method acting, which greets guests at the Galaxy’s Edge threshold, actively rears its arguably unnecessary head as Cast Members invite guests to explore this section of the Falcon’s interior. If role playing is your thing, you will love the creativity and interaction. As everywhere else in the park, these Cast Members are wonderful in their role. Given the incredible stand-alone nature of the abundantly-creative surrounding attraction, like a taco smothered in frosting, it can cause one to wonder as to its need or worth.

Not a household Star Wars personality, guests will want to familiarize themselves with this ancillary scoundrel. Fans of “Star Wars Rebels” will recognize and be charmed by the attraction’s sinister host. While, among the unfamiliar, Hondo’s pronounced accent may yet elicit cringe worthy memories of the Gungans, and other less-culturally sophisticated characters. Once you get past the regressive speech-pattern stereotype, the shifty pirate is actually rather charming, even as he tricks guests into sealing their likely fate.

The owner of Ohnaka Transport Solutions, Hondo sets the scene, telling travelers why you’re there and what you have in store. The dearest of old friends, Chewbacca, makes an appearance during the pre-show, begrudgingly dropping off the legendary Millennium Falcon for our dubious use. Three roles are detailed––pilot, gunner, and engineer––which guests will assume to accomplish their mission. Guests learn more specifics in the Cast Member interaction referenced above. For now, you may read about the entire adventure in these First Impressions.

Without spoiling anything, once in your seat, the excitement, creativity, and detail reach an entirely unanticipated level. Posts are all over the internet, so the fact the ride takes place inside the cockpit of the Millennium Falcon is now no big secret. Once you that door opens in front of you, and you step onto the flight deck… essentially you exit the world you once knew, where really creative people could mostly replicate places and things you previously only saw on-screen, and you enter a world where they can do it perfectly, with neither flaw nor peer.

If you can’t wait, and would like to delve deeper into the action within Millennium Falcon: Smugglers Run, please see our following initial review:

Or you can check out our first ride!