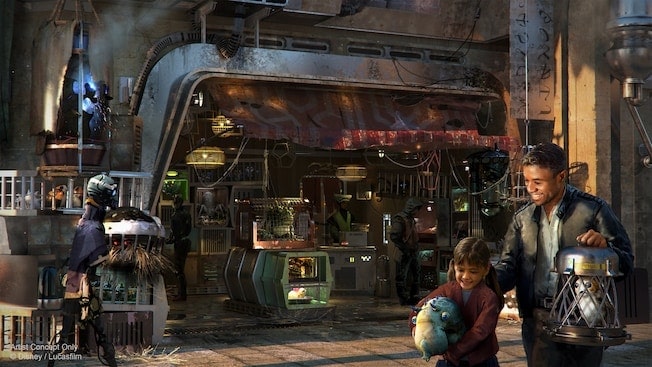 BLACK SPIRE 101: Everything You Need to Know About the Creature Stall in Star Wars: Galaxy’s Edge

Editor’s Note: Welcome to Black Spire 101! There’s a universe of information out there on Star Wars: Galaxy’s Edge, so we’re making an effort to compile each shop, eatery, and experience into all-encompassing, consistently-updated pages filled with one-stop information. Feel free to bookmark these as we will be updating them with all the latest information and photos from inside Black Spire Outpost. These will prove to be essential on your next intergalactic voyage to Batuu, regardless of what coast you’re on. As we publish more of these pages, we will be populating them into a bookmark library, so stay tuned, and make sure you pull on those yellow straps!

Everything You Need to Know: Creature Stall

Looking to adopt a creature from a galaxy far, far away? Look no further than the Creature Stall in the Black Spire Marketplace! At this shop, you’re able to take a look at various cargo and crates that are holding some of the rarest creatures that were acquired from across the galaxy.

At the Creature Stall, you can find a variety of creatures that you’re sure to fall in love and welcome into your own family. After all, most of these creatures have already traveled far across the galaxy, so a trip back to your own galaxy won’t be anything too unusual. They’re sure to adapt quickly, though special attention may be needed for a Tauntaun to have an appropriate home.

From Kowakian monkey-lizards that roam the underworld of the galaxy to cute little Porgs, there’s sure to be a creature perfect for your family!

Black Spire Easter Egg: Keep an eye out for Loth-Cats at the Creature Stall. The Tooka Loth-Cat first made its appearance in the Clone Wars series and most recently in Star Wars Rebels.

Bina is the Creature Stall’s proprietor. There’s not much known about her other than she’s often traveling through various star systems to keep her store filled with unique creatures for all her customers.

The Creature Stall is located within the Merchant Row district of Black Spire. It’s next to Toydarian Toymaker, where you can find the best handmade toys if travel regulations prevent you from bringing back a creature through customs.

WHAT: Adoptable Creatures and Lovable Plush

Let’s start with the creatures, as this stall is most famous for. The first here is the Kowakian monkey-lizards. You might recognize them from hanging around the Hutts and dealing with some rather unfriendly people. However, these creatures are sure to love you as they make a spot resting on top of your shoulder.

This creature acts much like the banshees do in Pandora over at Animal Kingdom. They even have the laughing sound that is so famously heard in the film. The monkey-lizard will also be available in blue as shown below.

There’s adorable Porgs for you to adopt, and perhaps they’ll be less meddlesome then the ones that Luke Skywalker had to deal with during his time on Ahch-to. This Porg is much like a puppet in that the mouth and wings move.

Far from it’s home on Tatooine, the Rock Wart on the left darts his tongue out when pressed.

If you’re looking for more icy creatures, there’s a few for you to pick from that are used to the frigid cold of Hoth. Tauntauns and Wampas are available for purchase, but keep in mind, some are more gentler than others. Tauntauns should not be used as sleeping bags unless absolutely necessary too.

But if those creatures aren’t your type, and you’re looking for something a little more cuddly, there’s the beloved Puffer Pig from Star Wars Rebels!  They oink when you squeeze them too.

Though maybe you’re not looking for a creature to cuddle, but perhaps a plush. Well, Bina has you covered as well with an assortment of plush figures of our favorite characters for you to take on your next adventure!

First up, we have Rey and Finn, accompanied by a small Porg plush.

If you’re looking for the original leaders of the Rebels and not the Resistance, you’ll find Princess Leia, Lando Calrissian (and his cape), and Chewbacca.

Maybe you’re more of a fan of the First Order and would rather pick up Kylo Ren and a Stormtrooper, as shown here.

You can also find Darth Vader, Jedi Master Yoda, and the cutest creatures from the forest moon of Endor, Ewoks!

You might also spot the Toydarian Watto and Padawan Ahsoka Tano while looking through the Creature Stall.

And of course, the galaxy’s most influential gangster, Jabba the Hutt, also received the plush treatment. At least he’s not as slimy in plush form.

What do you think of all these creatures and plush? Will you be adopting any creatures into your family or bringing along your favorite character on your next adventure?