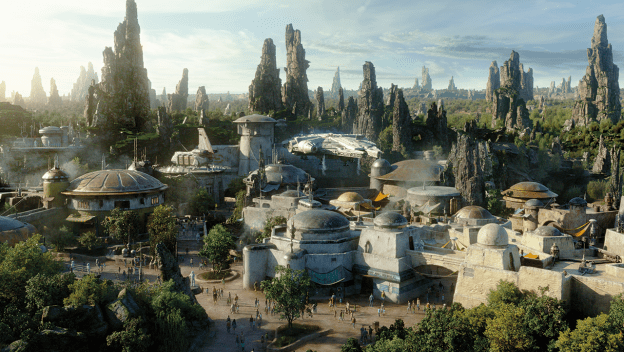 Unless you’ve been living under a Sandcrawler, you know that Star Wars: Galaxy’s Edge opens first at Disneyland Park this week on May 31st. Well, you may be surprised to know that Disney is already anticipating success with this addition on both coasts and is scheduling an expansion of the massive 14-acre themed lands for the future.

While they have already scheduled these expansions for Disney’s Hollywood Studios and Disneyland, they are a little far off. In fact, they won’t happen until 2027, according to internal documents. This will allow the land plenty of time to grow with the parks, letting Disney figure out the role-playing elements and how to handle the crowds properly over some years. In the case of Walt Disney World, the Star Wars Hotel (rumored to be called Galactic Journeys: A Star Wars Adventure) will fill some of that time gap when it opens in 2021. It will also give the Star Wars franchise time to generate plenty of new material with multiple upcoming series on Disney+ and three new films scheduled to be released from 2022-2026.

It will be interesting to see how Walt Disney Imagineering blends future stories into a land with its feet planted firmly between Episode 8 and 9 of the current series.

BLACK SPIRE 101: Everything You Need to Know About Dok-Ondar’s Den of Antiquities in Star Wars: Galaxy’s Edge