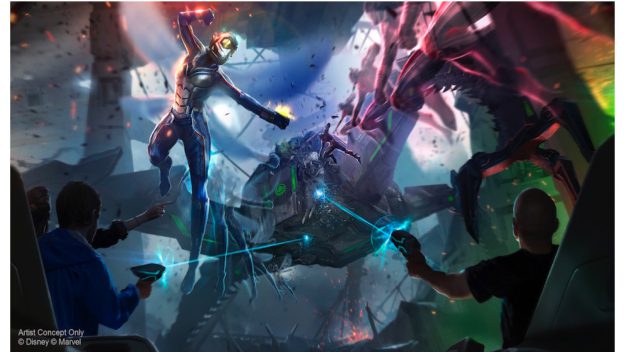 With “Avengers: Endgame” smashing into theaters across the globe last week and shattering records with $1.2 billion in box office worldwide, Disney is riding the wave of ever-increasing Marvel popularity to recap some of the attractions coming to Disney Parks worldwide. Check out all that’s in store below!

Avengers are setting up new headquarters around the world and will be assembling in a major way at Disney California Adventure park at the Disneyland Resort in California, Walt Disney Studios Park at Disneyland Paris and Hong Kong Disneyland. Recruitment begins in 2020 in California, but check out everything we know so far as you get ready to suit up alongside the Avengers!

Guests don’t have to wait until 2020 to get in on the action. In March, the all-new interactive attraction Ant-Man and The Wasp: Nano Battle! debuted at Hong Kong Disneyland as the resort’s second Marvel-themed attraction and the first to feature a female Super Hero as a lead character. Check out our full ride POV below!

This comes on the heels of fan-favorite Iron Man Experience opening in 2017 and is part of the continued development of an ultimate hub for Super Hero action in the region as part of Hong Kong Disneyland’s multi-year expansion, plus the hugely popular Guardians of the Galaxy – Mission: BREAKOUT! at Disney California Adventure park.