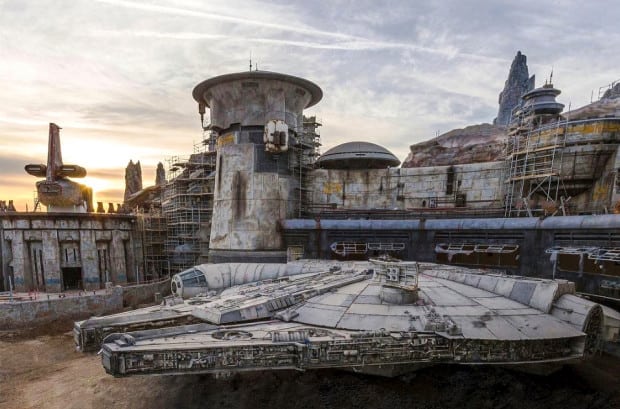 If you were wondering how Disney will enforce those 4-hour reservations to visit Star Wars: Galaxy’s Edge from May 31st through June 23rd, wonder no longer. Per Brady MacDonald of the OC Register:

Disneyland expects that four hours will be enough time for most visitors to explore Star Wars: Galaxy’s Edge during the initial reservation-only period and that scoundrels who overstay their welcome will be dealt with by a squadron of stormtroopers.

Disneyland will issue colored wristbands to visitors during the reservation-only period for each of the four-hour windows. Newly-admitted Galaxy’s Edge visitors will mix in with those already in the land much like the Halloween events at Disneyland.

“At a certain point, if we have to, then we’ll start to ask them to leave the land,” said Disneyland vice president Kris Theiler.

Disneyland expects that most visitors will find four hours to be more than enough time to explore the new 14-acre Star Wars land.

“Four hours is a long time in the land,” Theiler said. “Most guests are going to find that they’re ready to roll after four hours.”

Stragglers will be dealt with by the First Order stormtroopers patrolling the land.

“We’ll be utilizing the troopers to help us, for sure,” Theiler joked.

The reservation system has been designed to manage crowds and minimize wait times while keeping the land below capacity.

“It will be an awesome time to visit the land,” Theiler said.

The goal is to keep the wait times for Smugglers Run under two hours, Theiler said. Accommodations will be made if the attraction should experience any downtime.

The wait time for Smugglers Run will balloon if everybody entering Galaxy’s Edge heads straight for the attraction. Disney hopes to disperse visitors throughout the land during the reservation-only period and persuade riders to postpone their journey on Smugglers Run until the second or third hour of their visit when wait times will be less.

“We want to try and make sure that people aren’t spending the whole time standing in the queue,” Theiler said.

At the same time, Disney doesn’t want riders waiting until the last minute of their four-hour window to get in line for Smugglers Run.

“We want each group to feel like they had an awesome experience,” Theiler said.