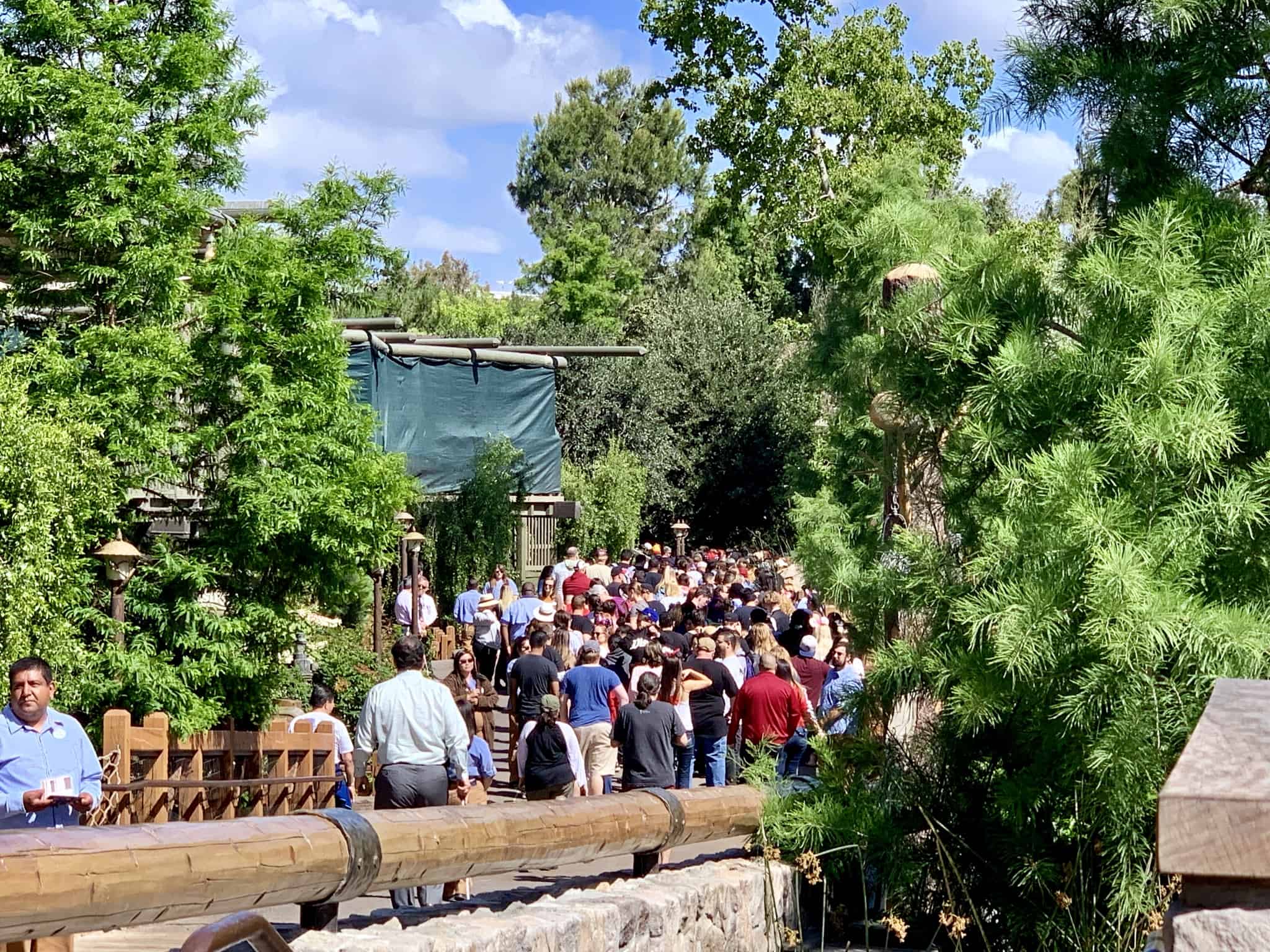 It’s been a big week at Disneyland Park. First, Sleeping Beauty Castle finally reopened after a four-month refurbishment. The Moonliner Rocket in Tomorrowland received an Alien Pizza Planet makeover. And the Adventureland marquee is back. And that’s not all! Keep reading for more updates from our latest trip to Disneyland.

We fully expected to walk into a crowded Disneyland after news that Disneyland Resort parking was full several days in a row last weekend. But we found Disneyland to be fairly slow on this beautiful morning.

After undergoing an exterior refurbishment throughout April and half of May, the scrim is finally gone from The Mad Hatter Shop on Main Street, U.S.A. revealing a new coat of paint.

The shop sign and exterior have received fresh paint, giving this store a revamped look. It was looking a little worse for wear before, so we love this refurbished look.

Nearby, we managed to catch a performance of The Straw Hatters with guests Mickey and Minnie.

Further down Main Street, we spotted a Rainbow Pride cupcake in Candy Palace for $5.99. Only one cupcake was left, so they appear to be very popular with guests.

Next door, there are new construction walls up between Refreshment Corner and Jolly Holiday Bakery.

It looks like they may be making enhancements to the planters between the two eating areas.

Finally, months after its arrival at Walt Disney World, the Mickey Mouse Ballon Popcorn Bucket is finally on sale at Disneyland. This popcorn bucket can be purchased by guests for $18. It is not an AP exclusive and there are no refills on this bucket.

Over in Fantasyland, we were shocked to see how uncrowded this area of the park was. The line for Matterhorn Bobsleds says 30 minutes but it looked to be shorter than that. FastPasses were available to use almost immediately after redeeming at the kiosk.

Storybook Land Canals were closed this morning and it looks like the railings are being repainted. Cast Members have been retouching the paint on railings throughout the park for a couple of weeks now.

The line for Mr. Toad’s Wild Ride was only five minutes, a rare sight in this family-friendly area.

Snow White’s Scary Adventures had no line at all, so guests could walk right on.

But of course, Peter Pan’s Flight had the usual 45-minute line, with the newly expanded queue being taken advantage of.

Even Tomorrowland was easy to walk through with its lack of crowds.

And Mickey’s Toontown was such a lovely sight to see compared to our last visit when it was overrun with strollers.

There are still walls up around the entrance to Frontierland, but some have been removed on the left side of the walkway. And the water has been filled up between Frontierland and Adventureland.

Last week, we saw construction walls up around the fencing across from the Big Thunder Mountain exit. Now, those walls are gone, revealing a newly expanded area.

Currently, the area is not being used and is blocked by a row of benches.

With Star Wars: Galaxy’s Edge opening in a week, the entrance from Frontierland is open. However, Cast Members are posted just outside to block guest access.

Very few people were using the trail from Frontierland to Fantasyland, so we used this moment to soak it up. Come May 31, this will likely be a very different story.

And the other access point into Star Wars: Galaxy’s Edge is also open and being blocked by Cast Members.

It’s nice to see this area looking more up to shape again, with the water levels filled. However, it doesn’t look like they’re going to take advantage of the reduced foliage to expand the walkways.

Over in Adventureland Bazaar, we spotted the new Dole Whip Swirl Mickey Ear Hats on sale. This tropical Mickey Ear Hat can be purchased for only $24.99 and is also available at Walt Disney World.

If you love Dole Whip, there’s an entire collection of Dole Whip merchandise on sale at Adventureland Bazaar, like the Dole Whip Disney Snack Fan.

Just like the rest of the park, Adventureland is fairly empty and much more enjoyable.

The wait for Jungle Cruise says five minutes, but it looked like guests could practically walk right onto a boat.

Even Indiana Jones Adventure had a short wait time. We were pleasantly surprised to see this not too crowded with people trying to get on the attraction, as we’ve been accustomed to seeing.

Perhaps it’s because Pirates of the Caribbean was temporarily closed, but New Orleans Square was also very empty. If you haven’t put it together by now, it pays to wake up early and arrive close to park opening.

Cast Members are doing paint touch-ups outside of the Club 33 entrance and the Le Bat en Rouge shop.

For the past few days, Cast Members have been previewing Star Wars: Galaxy’s Edge ahead of it’s opening on May 31. Today we spotted a rather large group getting ready to enter the new land from Critter Country.

If this is any indication of what’s come, we have a feeling that lots of patience will be necessary when accessing Star Wars: Galaxy’s Edge.

Despite the crowd of people previewing the new land, the rest of Critter Country is fairly empty. Seeing such an empty Disneyland Park gives us hope that there will continue to be mornings like this in the future, even after May 31. Only time will tell.

BLACK SPIRE 101: Everything You Need to Know About Docking Bay 7 Food and Cargo in Star Wars: Galaxy’s Edge