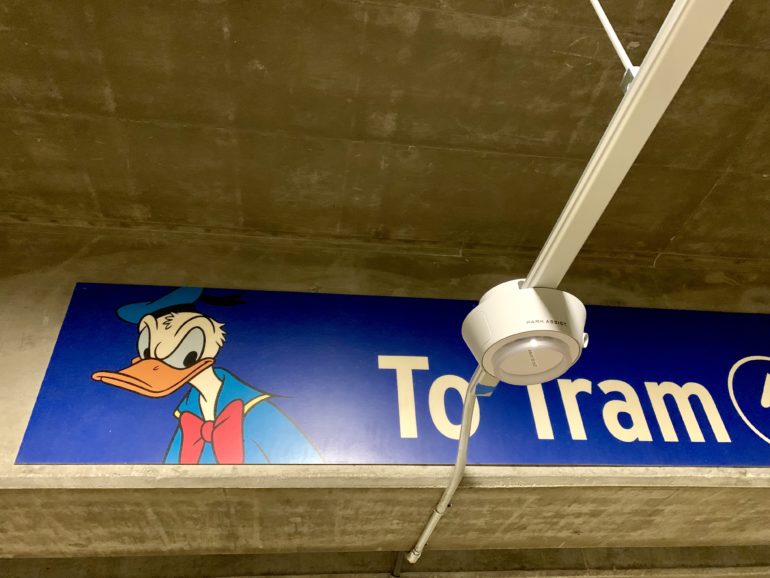 It’s finally May and we are less than 30 days away from the opening of Star Wars: Galaxy’s Edge. In preparation for a busy summer, lots of changes are happening around the Disneyland Resort. Here are the latest happenings in the Downtown Disney District, including parking structure updates and new merchandise.

The new Park Assist has been installed on Donald, Goofy, and Mickey levels in Mickey and Friends Parking Structure. Although they are not yet in operation, these new parking guidance systems should help guests find open spots when arriving at the Disneyland Resort, especially later in the day. They’ll be lit in colors that indicate whether the spot is available or not, which hopefully expedite the parking process.

We expect installations to happen soon on Daisy, but we’re curious to see how they handle installation on Minnie, the rooftop level.

These new screens at the end of the row will inform guests of how many parking spots are available in each row.

And down at the bottom of the escalators at Mickey and Friends Parking, a new stroller size check location has been installed. New rules regarding the dimensions of strollers permitted in Disney Parks went into effect May 1, along with some other rules. Fliers with the new rules are being given to guests when they pay for parking.

Speaking of parking structures, work continues to be done on the new Pixar Pals Parking Structure. More beams have been added to the staircase closest to the escalators.

And the trees that we recently added near the escalators have been planted, making this their permanent spot.

The roof is about halfway installed above the escalator loading zone. This part of the parking structure has progressed quickly throughout the month of April, so we expect to see it come together soon.

In case you missed it, the new Pop-Up Disney! A Mickey Celebration exhibition is now open at the former ESPN Zone restaurant in Downtown Disney District. The exhibit is available for a limited time, so be sure to get your tickets online ASAP.

Back in February, Disney announced that the new Sugarboo & Co. Boutique would be opening this spring in Downtown Disney. We’re about a month into spring and the store still isn’t open. However, we can hear a lot of construction going on inside the store as we walk by. Hopefully, that’s a good sign it’ll be open soon.

The crowds at the Disneyland Resort have been a bit heavy after a couple of slow weeks in April. We’ve been seeing long lines to enter Disneyland Park at the main gate. And it looks like the entrance to take the Monorail to Disneyland has been hit with crowds too.

Further into Downtown Disney, the new Black Tap Craft Burgers and Shakes restaurant is finally open after a long delay. Be sure to check out our review before you go.

If you’d rather get something on the go than dine in, there is a quick order and pick-up window right next to the outdoor patio.

Before heading into the Parks, we had to make a stop in World of Disney to check out new merchandise. As usual, we weren’t disappointed. This adorable Tiki Room Alex and Ani Bangle is available for $49.95. It’s double-sided, so you get twice the fun.

Still recovering from Avengers: Endgame? Perhaps these new Pop! Funkos from the movie will put a smile on your face. We spotted Hulk, Thor, Hawkeye, Captain America, Captain Marvel, Black Widow, Ant-Man, and Nebula on sale for $14.99 each.

What better way to laugh than with a new t-shirt? We think this Slinky Dog “Abs of Steel” t-shirt is hilarious. You can pick this shirt up for $34.99.

As well as this new Genie “Phenomenal Cosmic Powers” t-shirt, also on sale for $34.99. It’s available just in time for the new Aladdin live-action film this month.

Thanks for following along with us. Be sure to check us out on Twitter and Instagram, where we post more news from around the Disneyland Resort.