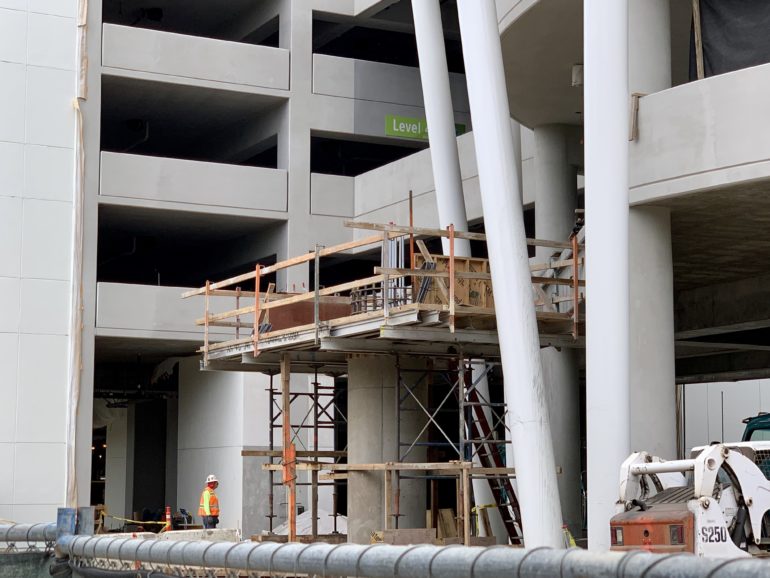 At the end of March, we announced that the new parking structure at the Disneyland Resort will be named Pixar Pals, with an opening date slated for July 2019. Today, we decided to check on the new structure and we were surprised to see the amount of progress that has been made. Construction has finally begun on the pedestrian bridge that connects Pixar Pals to Downtown Disney, and parking level signs have been added to the structure.

Before we get to those things, let’s check out the overall progress of the parking structure.

There isn’t a day we’ve visited this year where contractors haven’t been hard at work on the new structure. But it feels as if this area is busier than ever, especially now that July is fast approaching. Finally, concrete is being laid on top of the dirt. And it matches the existing tile patterns at Mickey and Friends Parking Structure.

More trees have been planted near this corner stairwell. We expect even more greenery to be added to the planters along the exterior of the structure sometime soon.

The escalators and rooftop are coming together, as well. We’re curious to see if the roofing above the escalators will eventually match those at Mickey and Friends or remain tiered the way it is.

But the most exciting progress to date is the start of construction to the pedestrian bridge that will stretch across Magic Way. The addition of this bridge is meant to improve pedestrian safety and traffic flow. It sure will make skipping the trams and walking to Downtown Disney much easier.

The bridge will be accessible on the second level of Pixar Pals parking structure.

Here is a concept rendering of what the pedestrian bridge is expected to look like once construction is complete.

And speaking of levels, signs have finally been added to the parking levels. Guests walking by will just be able to glimpse the Level 4 Monsters Inc. parking sign, featuring our favorite duo Sulley and Mike.

Back in March, Disney released the art and themes for the six parking levels. Some of the most popular Pixar films will be represented in the new parking structure.

With all of the progress being made at Pixar Pals parking structure, including the construction of the pedestrian bridge and the addition of parking level signs, we are excited to finally have more available parking at the Disneyland Resort. This new structure will be adding 5,000 much-needed spaces. We can only hope this addition will ease the parking process once Star Wars: Galaxy’s Edge opens at the end of the month.